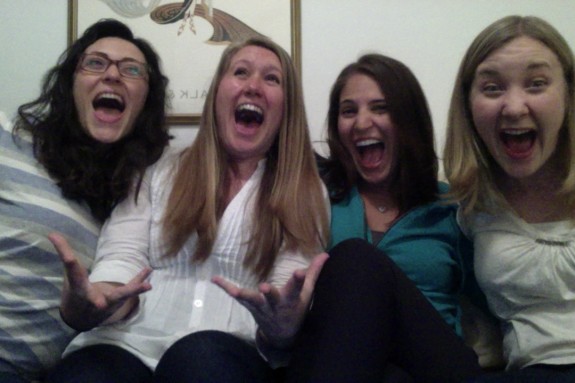 We’re pretending that our books hit the #1 spot on the NYT bestseller list.

It took me a long time to become comfortable calling myself a fiction writer. Telling others that I love to write, just for fun, surfaced all sorts of fears in me—would they think I was self-important or self-deluded, crazy or weird?

A voice in my head would immediately pop up and say, “Seriously? Who does that girl think she is, calling herself a writer—an artist? She’s obviously nobody.”

I finally got that annoying voice to shut up most of the time, and it all started with my writing group.

The way we began never ceases to amaze me because it’s the perfect illustration of what can happen when people are willing to declare to the universe that they’re artists. It was almost instant synchronicity, defined by Julia Cameron, author of The Artist’s Way, as “the possibility of an intelligent and responsive universe, acting and reacting in our interests.”

It all started after I’d been working at my first book publishing job for more than six months. One evening as I was getting ready to leave for the day, I passed by a work friend’s office.

“Hey Tracy,” Christina called out to me. “I’m thinking about going to this Idealist.org volunteer mixer right now—any chance you would want to come with me?”

I had about two friends total at this point, having just moved from New Mexico to New York, and spent most nights contemplating how I could make my life suck less. Of course I agreed to go.

As we walked to the subway, Christina explained the volunteer project she was working on with Idealist, which involved helping people achieve their goals.

“What’s one thing you’d really like to accomplish?” she asked me as we passed through the subway turnstile.

“I really want to write a book,” I said, surprising myself. It was the first thing that came to my mind.

“Well what’s stopping you?” she asked.

Besides the fact that I’d barely written a single piece of fiction in years and I had no idea how to even get started?

“I just never feel like I have enough motivation,” I said.

“Hmm,” she replied. “Have you thought about joining a writing group?”

When we arrived at the event, which was at a dark underground bar filled with ping-pong and pool tables, Christina and I spent an hour or so playing ping-pong. We played against an Idealist employee and his girlfriend, Tracy.

“Hey,” Tracy said as we gathered our coats and started saying good-byes, “Would you guys want to be in a writing group?”

Christina and I looked at each other in complete disbelief. We told her that we had just talked on the way to the event about wanting to write but never having the motivation. Tracy suggested that we start by reading The Artist’s Way and discussing a chapter at each meeting.

We enthusiastically exchanged email addresses and agreed to form the group, and Christina said she knew one more friend, Melissa, who wanted to write as well, which brought us to four members. (It turns out that four members is the ideal number for a “creative cluster,” according to The Artist’s Way.)

Christina later told me she was so scared to write, that Tracy’s suggestion of reading and doing the activities in Artist’s Way was the only reason she’d even agreed to be in the writing group. She was that terrified of sharing her writing with others. I have to admit I felt the same way.

But as the date of our first meeting approached, I had to wonder: Could I really be someone who wrote in her spare time and met up with people who were basically strangers to share stories that I was certain would reveal my deepest secrets and thoughts?

Now barely a year later, we’ve read The Artist’s Way once and started it over for a second time, although we spend most of our meetings discussing our actual writing. Christina has a book deal, Melissa has an almost completed manuscript, and Tracy finally found her niche and has more than 50 pages written. I’m writing the novel that previously only lived in my head.

Yes, the three of them know my deepest, darkest secrets. They’ve seen all of my lousy first drafts and subsequent revisions. Yet here I am, still living and writing. My world didn’t fall down around me. Actually, it’s gotten so much bigger and richer as a result.

We later asked Tracy why she asked two total strangers to be in a writing group. She said it was because we worked in publishing so she figured we liked to write—so simple! Because of her fearlessness, she got what she wanted, and also changed three other lives in the process.

If you’ve been hesitant about telling people you’re a writer or artist, ask yourself, what’s to lose? Start declaring you’re a writer, and you never know how the universe might answer.