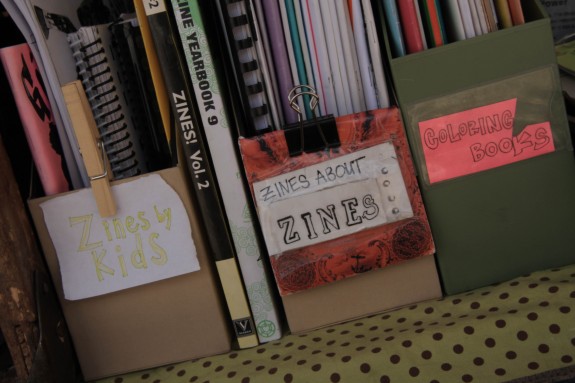 It takes a lot of heart to write, and in particular to write a zine. Because it isn’t easy, and in most cases it is something a person has to simply figure out for themselves, with little more than their own determination to help them achieve their goal. But that’s what being an artist is all about, that’s what being a writer is all about. Getting your work out into the world by any means necessary.

This past October I attended and participated in the second annual ABQ Zinefest. For those who may be curious, a “zinefest” is an event in which self-publishers gather to buy, sell, and trade their wares. Similar to a craft fair, only focusing on printed material, a zinefest is a great chance to make new friends, as well as to reminisce with old ones. But the most important part of any zinefest, for me at least, is the inspiration I feel when it is all said and done. Not only are my head and heart filled with new ideas, but I am also reminded that I’m not the only one with a relentless urge to write!

It’s amazing to think how much of a zine scene has sprouted up here in Albuquerque in the past couple of years, and how fortunate I have been to be a part of that. And although Albuquerque might not be the first place people think of when asked about artistic hubs of the world, the ABQ Zinefest proves a very important point: There are amazing people everywhere. An event like that shakes a city up, and suddenly artists come crawling out from all angles.

Writing can often be a difficult task, for a variety of reasons. An author may spend weeks, months, or even years trying to tell a certain story in a certain way. It can be a frustrating and lonely process. But as lonely as it might seem, you are not alone. There are others out there working just as hard as you, and events like zinefests, writer’s conferences, and poetry slams are a great way to meet and connect with other like-minded individuals. I highly recommend attending any such events that you can, or just start one of your own. Something as simple as a writing group might give you the encouragement you need to get through your next few chapters. And chances are the friends you make will value your input just as much as you value theirs.