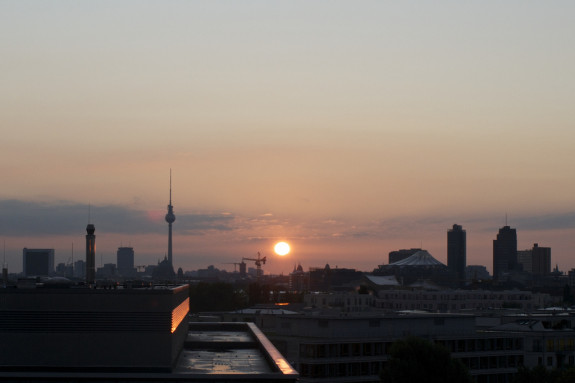 I’m like everyone else. I love most the morning after a presidential election. Not as bad as that YouTube kid crying her bitter tears at the tedium inflicted her by “Bronco Bama” but every four years, in the early hours of a new or renewed mandate, I do find myself mysteriously yet resolutely standing at a personal crossroad again. This time, however, all the signs are in Italian.

Hello, my name is Marianne and I’ve hijacked many trades in my 40-something years. I will be your blogger for a while.

To get back to that “morning-after” routine, it is true that eight years ago, hungover from the drowning of our collective sorrows over Bush’s re-election, I walked home at dawn through the streets of Tucson and put behind me months of hard-headed, creative voter registration activism. Never to look back, I was set to stare straight into my new full-time “career,” that of singer, performer, front-woman, the stuff of dreams. I was 35 and it was time to get serious about music.

I started out as poet when I was six although at that time, that only meant being moved to tears by words, most peculiarly the word “rosée,” dew. At the age of 17, I suddenly spoke up one night at the dinner table and announced, to everyone’s surprise including mine, that I wanted to make movies. I moved to LA and did just that. Then, 10 years later, when I met the man who was to be my first husband, I became a writer of lyrics, his lyrics, his songs. Circe would have been proud.

Fast-forward four years again to 2008 and the night Michelle Obama became our First Lady. I am in Berlin trying to keep awake cheering the home team in a swank hotel room after our first European show. My first album just got released on the continent, to decent reviews and promising sales. I didn’t know it then and didn’t care much to anticipate but this was the start of the most adventuresome and exhausting four years of my life. I toured and toured again Europe and made home of the stage. It was a lonely adventure and span across four continents and as many albums.

It is election night 2012 now and I am in Palermo, Sicily. I’ve stayed up till daybreak in my high-vaulted room in one of the many sumptuously frayed 15th century palazzio in the center of town. Now the city is rising. Seagulls first, quacking, then cobblestones from the last of the pretty heels, then an angry scooter, then the full symphony of bells and shouts in the slamming streets. I think this is the morning is when I fell in love with Palermo. I don’t know if it’s true you can only have one love at a time. If that’s the case — and I have been living in America for 27 years at this point in my life — then you and me, Tucson, we gotta talk. This girl wants her inspiration back and you gotta let me go.