Managing clients — I have not done an inspiring job in this area.

I never collected the names or contact info of people who bought my work. I used to sell a lot of work and never really thought it might be important to use them as a target market for, say, some funny quarterly art email with updates on new work and a memorable anecdote about art and life. And do you know how I finally managed to get an art dealer? When I left Albuquerque, I left all my paintings in a co-worker’s garage because she said I could and was not using the storage space for herself. She’s got East Coast attitude, she’s tall, thin, very attractive and charmingly aggressive.

So I called her one day from Seattle when I had no money and said, “If you can sell my paintings, I’ll give you 25%.” So she made me an Etsy account and an “Eva Avenue Art” Facebook page and uploaded stuff and then nothing really happened, because you’ve got to be out in the art world participating instead of keeping your work in some dark storage space and referring everyone to your website. I should also be marketing myself and getting shows and making a name for myself, like how I used to before the recession hit and I was able to use that as an excuse as to why I was not surfing the high waves of the art market. It reminds me of a panel discussion I saw at Art Basel with director Madeleine Grynsztejn of Chicago’s Museum of Contemporary Art:

“You mentioned earlier we’re dealing with a relatively passive audience,” Grynsztejn said to the mediator during the talk. “I think it’s important we remember it wasn’t ever thus. That’s, actually, that audience, this audience, the way we’re structured — we’re lit up and they’re not — that’s only 150, 170 years old. This happened at the end of the 19th century, when two guys in some theatre in Paris figured out how to divide electricity into two different systems so that we’re in the light and they’re in the dark and all of a sudden, audiences that have been active since the time of Athens went quiet, and so-called High Art moments started to happen where audiences were passive. So just as technology then created this new audience, technology now — YouTube and Facebook and Twittering and everything — can help us flip that around and we need to embrace that.”

I can’t stand when people talk about the need to “embrace technology.” Because I’m afraid of it becoming the only thing. Because the art world is something where you have to show up, not where the institutions should pander to the audience with gizmos and gadgets and interactive technology experiences.

A website with your work on it can’t be the only way to carry your art career into the big time. You’ve got to go to openings, go to studios, show your work, meet the people, fly around, work for long periods of time on important projects. I’ve been here in Seattle not building art contacts because it’s not much of an art town, with the exception of a couple locally notable spaces. Ninety-nine percent of the time I walk by a gallery window here in Seattle, my involuntary reaction is one of epic boredom and cheap despair. It’s more of a music and writing town. Great writers live here. Great musicians live here. Because when it’s dark, rainy and cold eight months out of the year, you want to go to a concert that entertains you all night long while you drink or you want to curl up with a book or a blog. Visual artists take off to NY and LA and Berlin. But people here need art for book and album covers. The woman who owns Crybaby Studios in Seattle used a big drawing I made for her band’s latest EP. 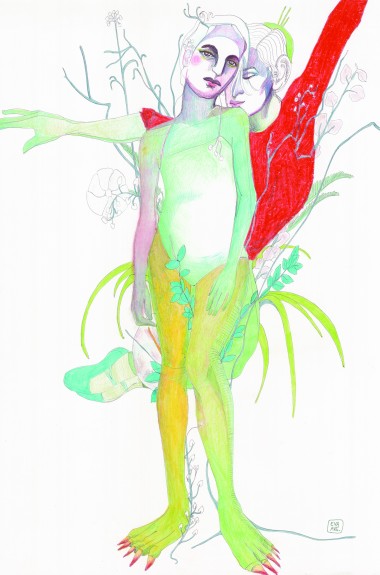 She asked me to give her a deal on it, so I told her to buy me a Thai food dinner. I could’ve asked for money, but I thought a chance to catch up over as much delicious Thai food I could handle on her tab might be sufficient recompense. Some might say that’s a stupid way to do business, and that I’m not going to pay the bills if I don’t charge people a respectable price for my labor and skill.

That’s why I’m not a millionaire.