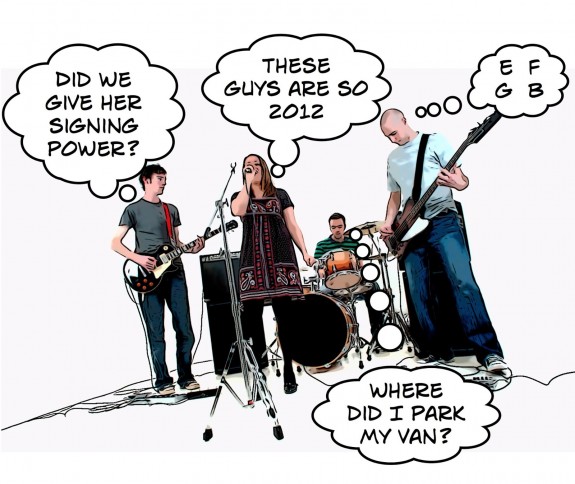 Dear Rich: Our band is built around a charismatic lead performer, kind of like Bruce Springsteen and the E Street Band. The band got asked to sign an agreement with an indy label. Except when it came time to sign, only the leader of the band signed, not the rest of us. Does that mean that only he is bound by the agreement? Does this mean that only the leader gets money from sales of recordings?

The band members are probably not bound by the agreement (and therefore not entitled to income from it). Most labels that want to bind musicians make them sign the paperwork. However, the answer really depends on (1) how your band is structured — that is, what type of entity you are (2) in what capacity the leader signed the agreement, and (3) what the agreement stated — specifically are the band members named as “parties” to the agreement.

Partnership? If the band is a general partnership (the parties share in the liabilities and profits), band members may be bound by the signature. (You do not have to have a formal partnership agreement to be a partnership.) Typically, you’re a partnership if you all contribute to the business (equipment, time and money) and share income (performance, royalties, etc.) In that case, any general partner can bind the band. So, if the leader signed the agreement on behalf of the band then the band could be bound. (Here’s an article about contract signatures.) If you have a copy of the agreement, check to see whether the partnership is named as a party to the agreement, in which case all of the partners are bound “individually and collectively.”

Corporation or LLC. If the band has incorporated or formed an LLC, the leader could also bind the band if corporate or LLC documents authorized the leader to sign on the band’s behalf.