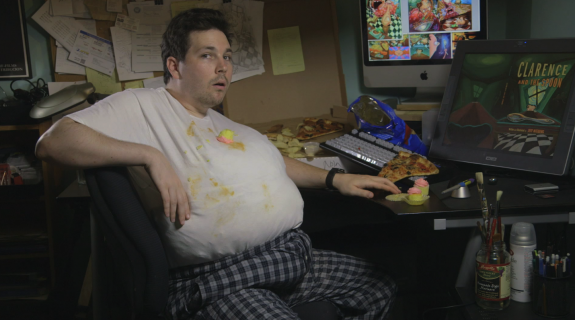 I wore a fat suit for my Kickstarter video.

Sometimes, when working on a single creative project for a very long time, you tend to transcend the usual mechanics of motivation, stamina, and logic. When it has been a year, or maybe two or three, these concepts can become obsolete or they can morph into something totally unrecognizable. I found myself in this odd situation, working on a side project that ended up taking seven years to complete. It was a kid’s book called Clarence and the Spoon I began in college and didn’t finish until I was well into my career as a freelance illustrator.

During this time I made a lot of mistakes, had a lot of doubts, and learned a lot about art and myself. So for anyone who is stuck in a long-term project, or just starting one, I’ve tried to put together a list of advice that, in hindsight, I wish I knew from the get-go.

Hopefully, this list will offer some comfort and reassurance that it is a process, and that if you’re in a crap stage of it, where everything seems impossible, there’s hope on the horizon.

1. Know Why You Love Your Project

This might seem like a no-brainer, but I’ve found it helps to know why you’re passionate about your project and what you want it to be. Take a brain photo and store it in a safe place, it’ll come in handy when you’re about to poison yourself with mineral spirits, smash your head through your computer monitor, or commit some such art-related act of suicide. In my case, my single happy thought was that I was making the ultimate kid’s book for my younger self and weird kids like me. Every time I was ready to give up, I thought of that happy fictional kid. 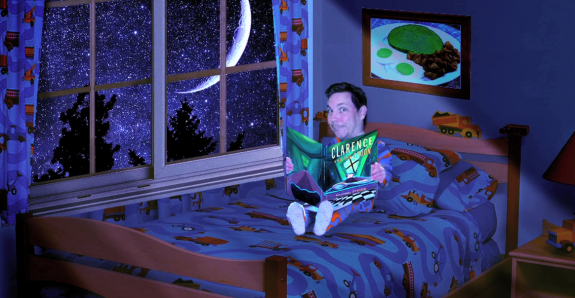 My imaginary younger self.

Once you realize you’ve got a long-term project on your hands, try and set short-term, achievable goals for yourself. Don’t stress about the long-term scheduling, the big picture will come into focus and you’ll get more done on some days than others. Ignore your friends who can’t believe it took you a whole day to paint a spoon. 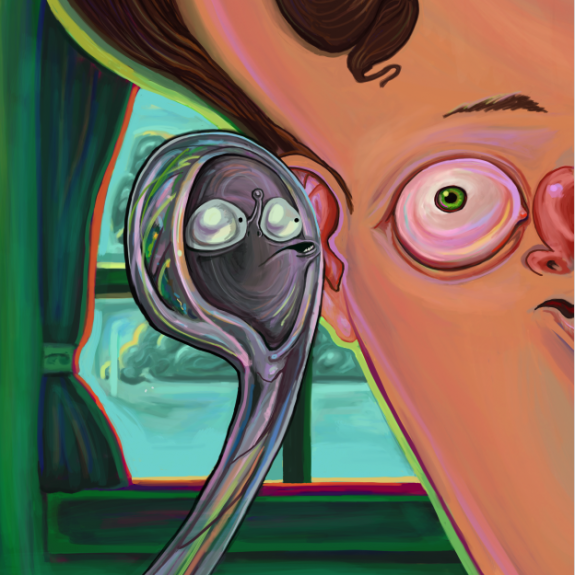 Listen to the spoon, not your friends.

While I was working on my book, which I painted digitally, my computer crashed and I lost a complete page that I had been working on for weeks. I’d had setbacks before but this was pretty devastating for me. I had to just pull my pants up and recreate the page, which meant weeks of sad, angry work. When poo hits the fan, it will suck, but know that it’s part of the process, and you’ll develop your own unique knowledge for how to deal with it. For me, I learned that all-too valuable lesson of creating daily backups on separate hard drives. 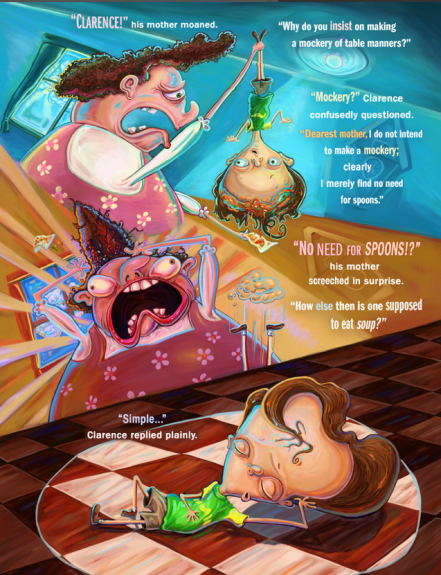 This page crashed just as I finished it, and I had to repaint it from scratch.

4. It Will Become Tedious

Some people think making art is a 24/7 fun party and sometimes it is. For me, the fun is usually watered down with really hard work that takes intense focus and energy to complete, especially for a long-term project. If you’re running a marathon, you have to pace yourself, but know becoming a heaving sweaty mess is normal. My advice is don’t beat yourself up for getting stressed from the repetition. Let out a banshee scream every once in awhile. Or if you need a break take a break. Just try keep up good hygiene, and eat some salad, and re-load that brain image from step 1. 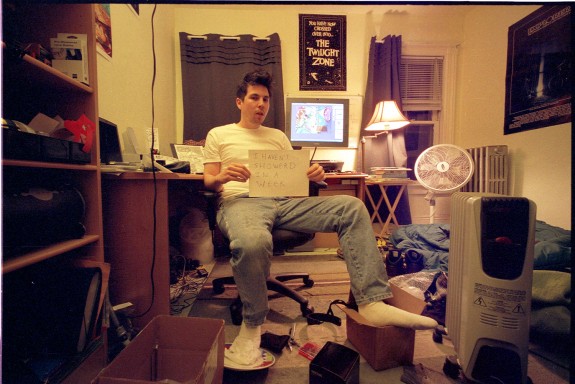 Not a staged photo. This was real-time documentation. The sign reads “I haven’t showered in a week.”

5: You Will Run Like Forrest Gump Into Loony Tune Town

It is hard to describe this stage. It’s a paradox. It’s beyond tedium. Here is what is happening during this step: You hate your project. Beyond hate, you’ve lost all subjectivity and objectivity. Here’s where it’s helpful to have some support, from friends, family and fellow artists giving you feedback. By the time I was reaching the end of my project, everyone, including my family, was sick to death of it. But not as sick as I was! If you don’t have these support elements anymore, that’s ok. You can find other ways of support. For me I played the movie Real Genius over and over, and I’d listened to soundtracks, daily, for years. But it’s normal at this point to essentially be plowing forward blind. Trust your instincts, hang onto steps 1 and 2, and accept that what you are doing is outside your own understanding. Your destiny is bigger than you. 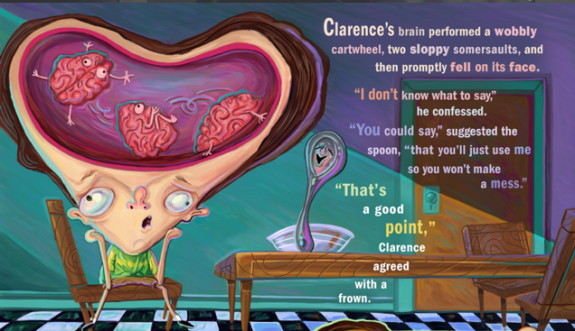 Your brain will perform a wobbly cartwheel, two sloppy somersaults, and then promptly fall on its face.

6. There is a Light at the End of the Tunnel

This is the hardest part to get through, always. When the end of the project is in sight, the remaining work is always the most difficult to complete. Of all the work that came before, the finishing touches are the most brutal. Even if they aren’t technically harder than what came previously, the exhaustion from everything else finally catches up with you and your brain hates that it can see the end, but that it isn’t the end. For me it was writing the cover page, easily the most mindless task of the whole book, but one which seemingly eclipsed the difficulty of the entire book. 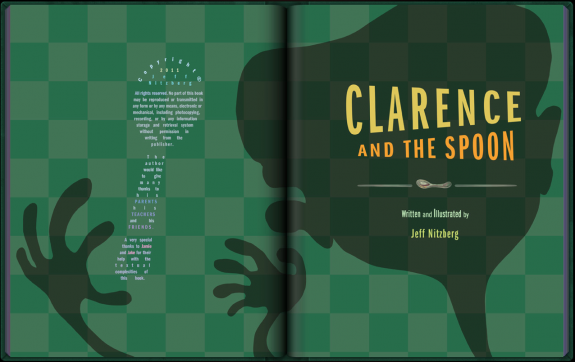 The most hair-pulling and final moment of my book: finishing the cover page.

The good news is, you are close to the end. It won’t be long now.

With some projects, it’s hard to know when you’re done. But with long-term projects, I’ve found something interesting happens: you reach a point where you’ve made it as good as you can and your body just refuses to go further. Normally the famous artist axiom would apply: it takes two people to make a piece of art – the artist to make it, and someone to cut the artists hands off when the artist is finished. But in the instance of long-term projects, you tend to be those two people in one. You are so familiar what you’ve being doing, and what you can and cannot do, that your body will simply stop. Don’t be worried if you don’t feel relieved. You’ll know when you’re done. And don’t be worried if you don’t feel instantly accomplished. The feeling of finality might not come for a little while. But you did it! You have accomplished something amazing. Even if no one gets it, rejoice in the knowledge that you are awesome. 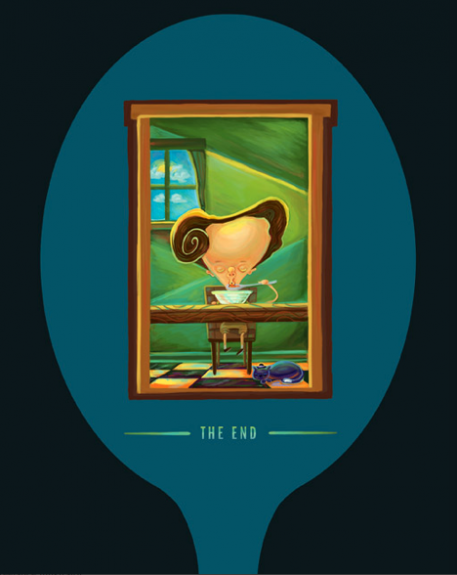