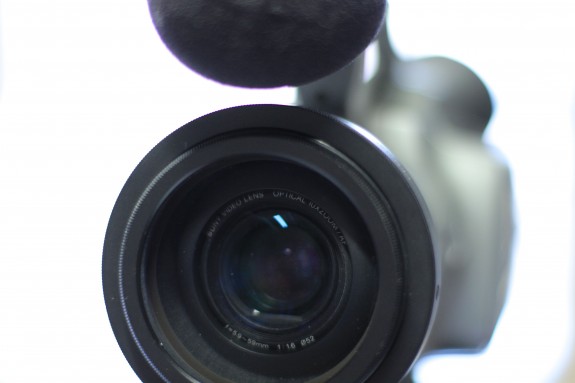 Gear. What of it? Filmmakers need gear. But which gear and how much?

Before answering that question an artist ought to realize that what makes a good film, or a good song or work of art, cannot be bought. What makes art of any kind “good” cannot even be described adequately.

In film there is actually only one thing that costs money that must be captured professionally: audio.

Of course, I learned this lesson the hard and expensive way.

When I first decided to make documentary films I thought that I needed to have the best, latest, and, importantly, the most gear I could afford. I raided my savings, sold guitars (ouch) and borrowed money to the edges of credulity.

A neophyte, I had no industry knowledge. I only knew that I wanted the best camera I could afford (a Panasonic HMC150), professional lights, microphones, a make-up bag, and a tool kit with items like different colors of gaffer’s tape. Also, I was certain that nobody could be serious about film if they didn’t own a Steadicam rig (minimum about $3,500).

This was before DSLRs (digital single-lens reflex cameras) were commonly used for film. But, I’m not sure I would go with a DSLR, even if I had the chance today; more on that below.

For the first month on my film project, Genetic Chile, I set up at least four lights everywhere I went. I made sure that interview subjects were bathed in appropriate makeup. I took hours and hours of velvety b-roll with the Steadicam. I concentrated on the image.

I carried all of my gear in pro-quality cases when I traveled. As I was working primarily alone, though with occasional help from my wife, Megan, or a friend (notably Willy Miller and David Theis), carrying all of the gear and setting it up by myself started to become loathsome to me. I began to systematically cut back. For my last interview I carried only a sinlge day-sized backpack.

The backpack contained the camera, a shotgun mic, a lapel mic, headphones, one pro light and stand, a tripod, and a small container of base makeup.

It is the rig I use today.

The tripod and the light stand strap to the sides of the backpack. I can walk through airport security without worrying about how my gear is being treated by the airline employees. I have worked under grants from Frontline World and P.O.V., among others with this set-up.

These days the Steadicam, the tool kit, and the bulk of the expensive lights and do-hickeys sit unused in the garage.

I downsized not because I’m grumpy about hauling gear, but because I learned over time that it doesn’t matter if the photography is perfect, or even if the lighting is particularly good. I’ve come to realize that gorgeous photography only seems to matter to photographers, frankly, and they’re generally as penniless as the rest of us artists.

What matters is the story and, equally important, the sound quality. The human brain is genetically attuned to failures and abrupt changes in sound quality, whereas it will deliberately ignore contrivances or mistakes in images. I first learned this watching Larry David’s sitcom, “Curb Your Enthusiasm,” which has some pretty egregious camera mistakes that no one ever seems to notice — including occasional white balance issues.

Sound capture is why I would not purchase a DSLR were I to buy a new primary camera. I like that my HMC150 has native stereo XLR inputs. The sound is captured with the image and there is no need for a separate audio rig or even crew. I monitor the sound through headphones as I conduct the interview.

Of course, you can purchase a box with XLR inputs for your DSLR, but I’d rather defer to the original engineers and go with a camera built specifically to capture professional quality sound.

I have seen Genetic Chile run on a 60-foot screen and it looked fine except for the color balance in places — a product of editing without a true color monitor. Which is why I would gladly trade the Steadicam and the light kit for a better computer and a real monitor.

In fact, Genetic Chile is riddled with the technical errors only a noob could produce. Yet, it is a successful film. It has been screened all over the world. It is in distribution at Cinema Libre and is recently available on Netflix. It is successful because it achieves what a little money can buy — a passable image with professional sound — and it also achieves that one thing that money cannot buy: it is a good story, a classic tragedy with good guys and bad guys in three acts.

I suggest that if you are starting in film, put your money toward a decent camera that captures stereo sound and one good microphone, and put off purchasing all the fancy stuff, unless you can afford a crew — and want to deal with all of the hassles that come with that.