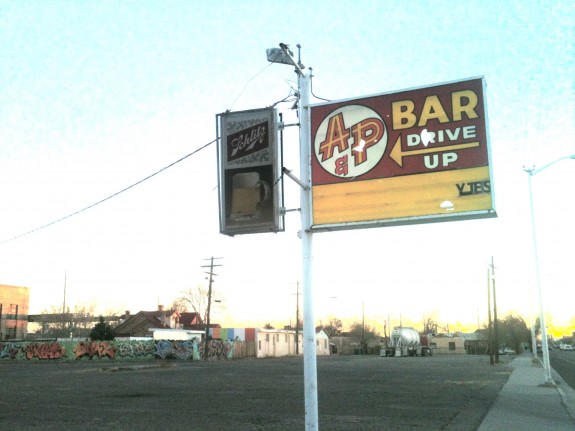 Few moments in my career as a musician have been as low as the day we pulled up in front of a liquor store in Wichita, Kansas. It was a dusty building surrounded by cattle feed lots full of forlorn and filthy cows mooing in the heat. The air was oppressive, full of manure and mud. I didn’t want to get out of the car.

I’ve played my share of dives over my 20 years in a band. Some of these places turned out to be wonderful memories and some not so wonderful, but I’m usually game to see what awaits when we pull up in front of a sketchy looking venue. Something about this place on this day, though, left me hollowed out. We unloaded and played, of course. This is my job, after all, but it’s sad when your heart isn’t in the very work you’ve dreamed up for yourself.

We played our set, but I played with a bitterness inside that rattled me.

To be fair: This was probably the only venue that would book us in Wichita at the time. It may still be. And, to be honest, this place is still in business and still booking bands. There must be bands happy to play there and people happy to see them play. None of that is any comfort when you’re miserable.

Between piled cases of beer there was a space for us to play ringed with turned-over crates for people to sit on. Our audience sat inches away from us while we played. Now when I say “audience” I mean there were six or seven exhausted looking people perched uncomfortably on plastic crates and a few people milling around in the back, maybe shopping for beer or maybe just taking a break from the heat and stench outside.

This was a free show and that often guarantees that no one feels obliged to pay any attention to the music. Some people were clearly there to drink. Some looked like they’d woken up on a plastic crate in a beer store and were unsure how they’d gotten there. A few looked like they’d come specifically to pick a fight with the band. I felt like even if I doused myself in gasoline and lit myself ablaze not one dull face would have flickered to life nor would anybody have bothered to move from the flames. Yes, I was in a foul mood.

We played our set, but I played with a bitterness inside that rattled me. I knew if I kept on playing shows with that kind of foul heart I wouldn’t be able to do this job much longer—a terrible thought when you’re actually working the very job you dreamed up for yourself.

After our set we half-heartedly passed around a tip jar. I didn’t bother trying to sell CDs. I saw that some people passed the tip jar forward without contributing. I think I saw one guy steal a dollar out of it. In the end we got a few quarters and a few filthy dollar bills, but then at the last minute a guy I hadn’t even noticed in the crowd came up and put a folded note in the jar then turned and left the store without a word.

When I unfolded the paper there was a traveler’s check inside made out for $150 and a note that read, “I am diagnosed with terminal lymphoma and tonight was the first night I’ve smiled in six months. Thank you!”

The point of this story is not to encourage you to play every beer store or to boast about our huge fan base of terminally ill people. What I want is to remind you (as this story still reminds me) that every chance you’re given to offer your art to the world is a chance for adding meaning to life (yours and other people’s). You may not know how meaningful your work is for some time. You may never know. Have faith, though, that what you’ve put your heart into will speak to the heart of another. It might speak to a lot of other people. It might only speak to one and then another one and another. It adds up.

There have been many other “horrible shows” along the path of my musical career, but the amazing thing is this: There have also been just as many times when fans have told me that they first saw us play and fell in love with our music at a show I remember distinctly as being god-awful, ignored, meaningless.

Take a moment now and again to consider if the hopelessness you feel as an artist is coming from within or from without. Leave some cracks in your armor where the light can get in. Have faith.