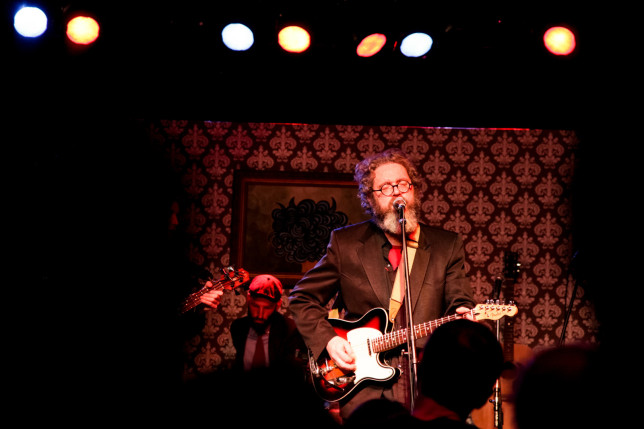 “Hey, thanks for coming out tonight!”

How many times have you heard a lead singer say just that sentence into a microphone?

How about this one: “Everybody having a good time?”

While the sentiments of such sentences may be sincere, the words themselves have lost their emotional meaning. They’ve just been said too many times.

When you regurgitate stale phrases into your mic it often feels to the audience about as heartfelt and exciting as a rapper grabbing his crotch and then pointing at the audience. This is soul-numbing stuff, all of it. Maybe eons ago all of these cliches had meaning, but nowadays these are tools for turning a stage into an assembly line and a live performance into a pile of plastic parts.

Of course asking, “Is everybody having a good time?” and saying, “Thanks for coming out!” are sentences that were said originally to communicate good will toward a crowd and to express a performer’s very real need to be understood and to please. It saddens me to see someone on stage try to connect with their audience by repeating those long-dead magic sentences as if they still have some power to communicate. It’s about as effective a communication tool as a spit-take in a sitcom. Nobody really spits wine across the room when they hear something shocking. We all know that, but we accept the lie when we see it in a certain context. People accept such signifiers of real emotion in the place of the real thing because we have been force-fed them over and over again — but when you hear a real gasp of surprise you know the vast difference. So, yeah, when you say, “Thanks for coming out tonight” your audience gets what you mean, but they don’t “feel” what you mean.

Real emotion revealed on stage with real words by a real person — it makes people pay attention to a performance in a way they may never have before. It’s a rare experience. It’s also extremely risky — and this is why so many performers avoid it.

When an audience is paying attention they are also judging. They may quickly decide they hate the person revealed to them on stage. So what. Live through it. The real goal of a performance isn’t necessarily to be liked. For good or for bad, live performance should be about letting something happen. LET IT HAPPEN.

Some people fake it. I remember seeing U2 in the 1980s and during a particularly dramatic moment in a song Bono stepped up onto one of the huge PA speakers at the side of the stage and fell off it into the crowd. There was an audible intake of breath as the entire audience panicked. Was Bono okay?? We were riveted waiting to see if he stood up and jubilant when he was helped back onto the stage. Two weeks later I happened to see U2 again and I was shocked to see Bono again fall off a PA speaker at the same moment in the same song. Now I felt utterly alone in a crowd of thousands as everyone else went through the emotional journey I could not repeat. What I felt then was huge pity for the man.

Only a living, breathing performer can enjoy the praise of a happy crowd.

I get why Bono built this moment into his show. Maybe it was an accident the first time, but he loved the effect it had on the crowd. Attention is as addictive as any other drug. But, when you force moments to happen in a show you are actively trying to replace real life with plastic widgets. You’re turning the potential for a peak experience into factory work. How sad to see a rock star working the assembly line.

Far better to risk it all. On the worst nights, performing live can make you feel assaulted, actually psychically wounded on some unspeakable level, but on the best nights it offers you moments when you feel connected, loved and understood. It’s like a thousand hours of therapy. It is an exhilarating experience, ecstatic and rare, but you can’t get there without taking the risk of it all going wrong.

The one time I saw Bob Dylan play live he stood far in the back of the stage behind a keyboard and said not a word between songs the entire night. It might as well have been a mannequin up there. Maybe it was. How small and alone he seemed back there in his corner. It was as if Dylan, the man, had been erased. He was now merely a vehicle for producing those songs we all loved. One of our greatest living songwriters — reduced to doing factory work.

Only a living, breathing performer can enjoy the praise of a happy crowd. Keep off the assembly line and remind your audience what live performance is all about. Be there then. Be here now.