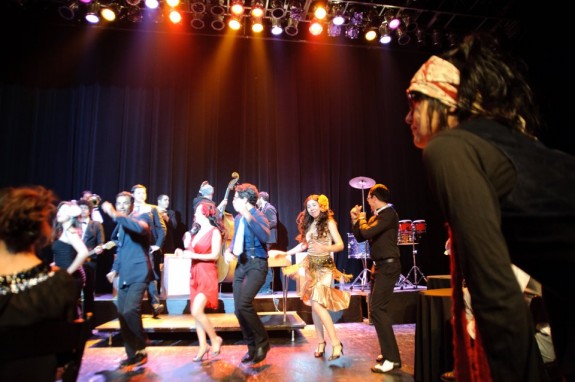 We are all in this together. In other words, “It’s better to do a favor than to ask for one,” as daddy Corleone was so fond of saying.

I used to be a filmmaker. I mean, I was the one asking for favors. I went to the “right” school, and just as we were implicitly taught in that plush waiting room to the Hollywood zoo, I begged, borrowed and stole to make my films.

But mid-career as it’s called, I took a sharp turn and headed for the songbird profession. These days, if I use my filmmaking skills at all, I use them to do a favor in a town, Tucson, where this particular set of chops is a lot rarer — and therefore more valuable as trade — than in Los Angeles.

So there I was, one springy afternoon, directing my drummer’s first music video for his big band. I was certainly happy to help him and made sure he realized the chance he had of having me on board and running such a well-produced show with all the right fancy, clicking toys. The setting was splendid. A considerably talented multi-instrumentalist, Sergio Mendoza is the head ringer of a 15-piece mambo orchestra. Enshrined on the resplendent 1930s theater stage, the band and dancers looked vibrant. I was going to quietly enjoy myself directing the large crew of volunteers, friends and musicians, most of them also part of my own touring band.

And it all came rather easy. With a week’s notice, I had put together a very motivated — and unpaid — crew. My thinking went like this: If you’re not going to pay anyone, at least they must get something else out of it, something that money can’t buy. Fun or a story, some free pizza, hanging-time with beautiful bods and maybe even the tail-end of a dream. If you believe musicians have any money to spend on fancy music videos, you are deluding yourself. This isn’t that kind of dream world.

I called up every production company in town, targeting first the ones with the most professional-looking websites and the highest camera rental fees. In return for their participation, the only thing I had to offer was to be part and parcel of an exciting project: the first-ever music video for the town’s band “du moment,” the up-and-coming Orkesta.

I didn’t need to say much else. You ought to let people think that they are giving into a success story, which they are, I suppose, if you still believe in that sort of arch narrative. Remember too that, in ”mid-market towns,” the recession has hit these higher-end companies most. If they’re any good and passionate at what they do, on top of not making money, they’re also dying simply to work. It all makes sense. Go to the top directly. They’re lonely there and need you to keep them relevant and entertained.

My top choice picked up the phone. I knew I had one chance of getting him to commit. He had to be caught up in the momentum of the production. It had to appear painless and fun, safe and productive. So I called up a “meeting” to get him to see the set for himself before deciding if we were legit. What I didn’t tell him is that I would have my whole team there to swoon him. When he walked in the theater lobby, there we were, notepads and pens in hand, looking mighty resolved and focused. A real team: the set photographer (a friend with a big camera); the background video artist (reliably “artistic”-sounding); myself; and most important, my assistant director, a willowy, tall and striking 20-something brunette. The minute he walked into the lobby and she looked at him, he was hooked. We were a perfect production machine and his professionalism got the best of him.

So I did my drummer a huge favor, I had a blast doing it and it didn’t cost me anything. The most HD-able company got the job and showed up with a fully-equipped three-person team-cum-jiffy gear for the four-hour shoot; I ran the show like clockwork. I could have been a good mafiosi. Here’s the final video: