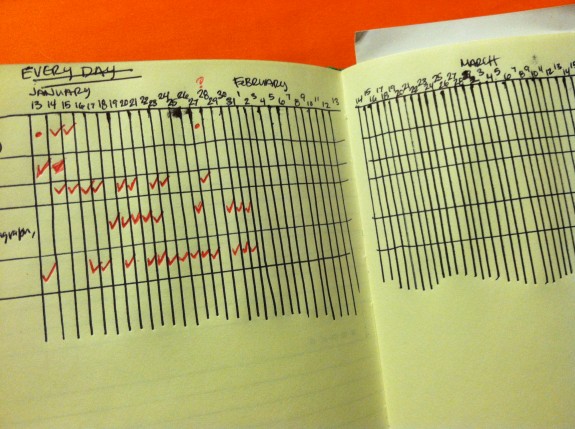 I did something very nerdy/geeky/dorky. I made a to-do list/graph/spreadsheet in the back of my planner. My paper planner. My “analog” planner, as a web-developer friend of mine put it.

I used a black pen and a straight edge to list, on the y axis (that’s the vertical one) various and sundry creativity-related things that I would like to attempt to do each day. On the y axis, I listed each day up to March 31, because only two and a half months would fit. The idea is that I do something and soon thereafter, approaching the appropriate vertices with my red pen, mark a confident check mark. January 17th. Took a walk. Check. There. Creative/good-for-me activity performed. Creative/good-for-me activity recorded.

I’ve been wanting to do something like this for a while, but I think the January issue of Mental Floss is what catapulted me into swift and decisive action. In their “61 Ways to Be More Amazing” piece, they included a bit about how Jerry Seinfeld, in order to keep himself writing new comedy every day, would mark a big red X on his calendar for each day he wrote new material. It’s simple. Elegant. Practical.

I now realize that I’ve been dreaming of putting together some sort of log/to-do list of creative-type things (song writing, practicing, drawing, reading) for at least a couple years but for some reason the spreadsheet format never occurred to me until now. Previously, I had visions of a list taped to my bedroom wall. Every Day: practice, exercise, write, read, dream. I may have tried this for a while, but it didn’t do much more than motivate me to feel twinges of despair. Being faced every day with a list of things I felt I should be doing consistently every day, while I was doing few-to-none of those things every day? Depressing.

It’s too much like a to-do list, and that’s why it didn’t work for me. I love to-do lists. I hate to-do lists. Here’s how, up until recently, I had approached the making of a to-do list: I have things to do, many things to do, and they’re all swimming around in my brain and I’m terrified I will forget them so I must write them down quickly and aim to do them swiftly and then not actually realize that I’ve given myself a most unfair assignment and not given myself the time I need to complete it and then feel like a failure for not getting it all done. So, it’s an anxiety-causing experience that, once it’s over, gives me a sense of accomplishment: I’ve organized my brain, kind of, yay! Then I also feel more free to not feel as motivated to actually do the things on the list. It’s a mess.

Thankfully, this is changing and now I’m able to calm it on down. My big fat geeky analog spreadsheet checklist resolution doesn’t make me feel this way. It allows for that awkward start and stop phase that happens when you try to integrate new habits into your life. It allows me to see the ebb and flow of the types of things I’m working on. It shows me, in a series of mostly clean black and red lines, what I’m spending my time on. It challenges me to remember what I actually want to spend time on. It’s forgiving. It’s kind. And I’ve been liking it so far.