I was thinking about how cities have definitive visual art styles — how New York art is not like LA art is not like New Orleans art. So then I was thinking, for a bunch of reasons, about how maybe Chicago art is trash art: like, artists there may have an extra tendency than in other places to use trash as their medium. So I called one of the best painters I know — Kelly Reaves — who co-runs The Peanut Gallery at 1000 N. California Ave. in Chicago, and told her about my theory.

“I don’t think of trash being a trendy medium here but I see carpet a lot, so that could count,” Reaves said. I mentioned the time we were at a Chicago art show in 2006 and some dude had thrown up a ripped-out piece of notebook paper with a shark scrawled onto the lined paper. Made me think of trash. Trash art. “Maybe it’s just about immediacy,” she said.

And I was like, “Yeah, immediacy is the new medium!”

“As far as trash art,” Reaves replied, “two things come to mind. One is the Garbage Wall installation at Expo Chicago. 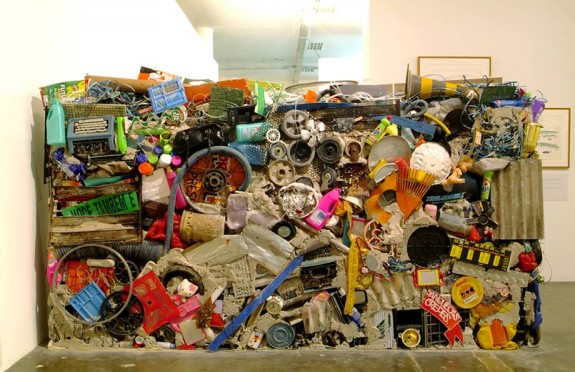 “It was huge. And there’s the guy who uses a lot of recycled materials — Theaster Gates — he’s blowing up. He was kind of known as a hyper-local artist and recently I’ve seen he’s in huge exhibitions in Berlin, so he’s becoming a face for Chicago these days.” 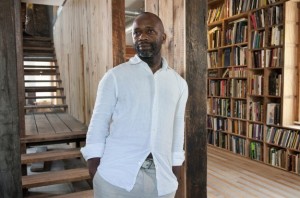 A face of Chicago these days: Theaster Gates.

“He’s one of our five most famous living artists and he’s interested in social issues,” Reaves said. “He has this one project called Dorchester Project where he bought dilapidated buildings on the Southside and turned them into libraries and artist spaces. It’s less an entrepreneurial project to him than an art project. Oh and then what’s her name, she teaches here now … Jessica Stockholder! I don’t know if she’s buying this stuff or using trash materials.” 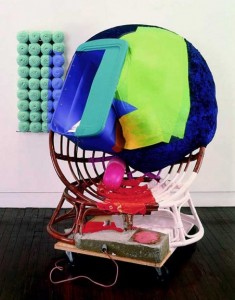 Reaves used to paint people and jungles with a master’s eye, and now she has been doing work that my mind’s eye saw as “trash art” at first viewing. And I don’t mean to say the first one is better. The same level of skill, knowledge and craft are evident in the new work. Here is her earlier work: 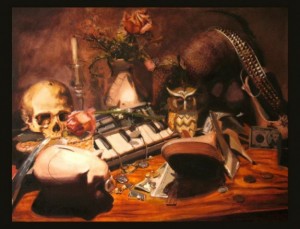 And here is her latest work, which is partly what pushed me over the edge of thinking Chicago had gone wild old-skool style: 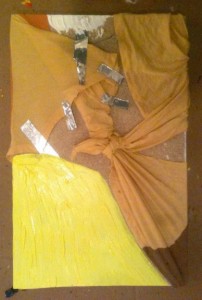 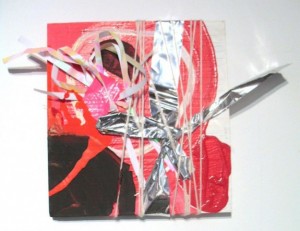 “I think of mine more like “party art,” ’cause I bought all those things,” she said. “Part of the reason I started doing those is because on Tuesday nights we have open house sort of thing at the Peanut Gallery and there’s a bunch of people there and I’m usually working and I don’t have the attention span to work on a complicated oil painting.”

Party art is a wonderful idea to me and I seriously hope that becomes a thing that evolves a few times over into something that really surprises us all. And it reminds me of the time I amassed something like 1,000 signatures petitioning Winning Coffee in Albuquerque to change the name of its waffle on the menu from “Fluffy Belgian Waffle” to “Belgian Party Waffle.” They would put colorful sprinkles on the whipped cream. A party. On your waffle. I lost the notebook with the signatures so I never gave it to the owners, but Bryan Jabaay thought it was pretty funny.

“I had a lot of really good teachers out there and they told me not to paint things — depict things — but actually create the thing,” Reaves said. “Instead of painting a sunset, create a sunset. Instead of depicting a person falling off a sofa, make it. It’s immediacy and getting to the base of the idea instead of making an illustration of the idea. That’s what modernism was about. Instead of painting a person feeling what they’re feeling, they painted the feeling. That’s Abstract Expressionism.”

I would soon find out about the Chicago Imagists, who rejected Abstract Expressionism in favor of something dirtier. Frieze Magazine writes:

In 1951, a year after 18 irascible New York artists posed for a now-infamous black and white photograph, Jean Dubuffet delivered a lecture entitled ‘Anticultural Positions’ to a rapt audience at the Arts Club of Chicago. Dubuffet’s idea of an anti-art aesthetic fell on fertile ground in the Windy City, planting seeds of inspiration for a group of artists who would later reject the tenets of Abstract Expressionism, and would daub dirty jokes over the clean, commercial facsimiles suggested by New York’s Pop exports. The Chicago Imagists, a group of artists bound by their liberal use of colour and bold design, would create a body of work that was a mix of the absurd, nervous energy found in 1960s underground American comics, cut with a wry sense of humour pitched somewhere between the bar-room and the schoolyard.

I would say that is not unlike art made in Chicago still today!

But Stephanie Burke also struggled to remember where she had seen any significant amount of trash art. She covers the Weekly Gallery Crawl for the blog Art Talk Chicago. “Occasionally, I see people who use trash in an assemblage, but I haven’t noticed it to a greater degree,” Burke said. “It crops up every one in a while. What’s interesting about Chicago — we have so many schools here spitting out MFAs and BAs and BFAs and whatever fucking conglomeration of letters they have — I have not found there is a general style.”

“There is a discussion of style in terms of the Chicago Imagists and The Hairy Who,” she said. “It’s, like, from the 60s or 70s but I haven’t noticed anything diagnostic, like, ‘Oh, that is Chicago art.'”

Oh wait! What’s this piece here by a Hairy Who artist? It looks like trash arranged in a beautiful eastern mandala pattern! 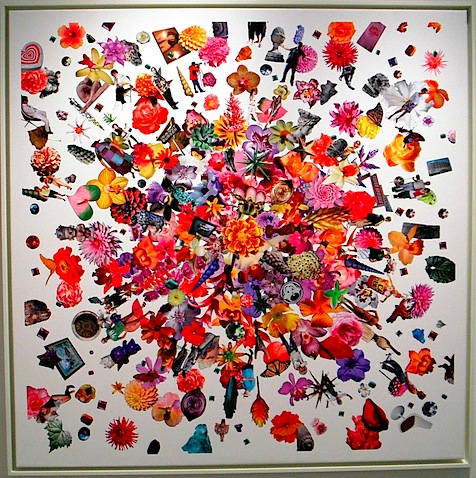 Carlos Betancourt (of The Hairy Who), Recollections, 2008.

So trash art is not a thing in Chicago any more than it is anywhere else, apparently, but I keep finding it. Or I’m just looking out for a certain pattern of stuff and so I keep finding it and adding it to this blog post.

But I was still struck by the fact that Kelly Reaves was making this art partly under the pretense of feeling rushed. Fast food. Fast cars. Fast communication. Fast men. Fast women. So hell, why not? Fast art! Maybe that’s why immediacy is the new medium. Because back when people didn’t have a million distractions, they had all the time and attention span in the world to make a painting. Time seems to be today’s missing element that is costing so much art its greatest potential! I mean, it took Leonardo da Vinci four years to paint the Mona Lisa, and then he went back and worked on it for three more years! The Mona Lisa took seven years to paint, you guys.

But some would argue that art is merely a reflection of the way we as a people operate in whatever day and age that the art is made, so if we truly don’t have the long-term dedication we used to have and we are appreciating our time differently, then it would almost be a lie if art was all made under some iron-clad rule that said art must be made with at least an investment of 50 hours.

Actually, that would be a cool art show. Make a piece that took a minute, then an hour, then five hours, then 10 hours, then 20, and 100! People could see the development.

1) Art with a lot of time put into it tends to look better or just have some quality to it that is a more deepening experience than otherwise.

2) We don’t have the attention span and lack of distractions we used to have, and therefore most art made today didn’t take as long as it should have.

3) The word “should” in the last sentence implies things could have been a different way. Like now is an abomination on the real now. And so if art is truly a reflection on the times, then there is merit to how art is made today, whatever kinds of merits those merits are.

4) Abstract art is higher quality when it is created on solid tenements of art, which any good painter knows. So if you start off on the right foot, you can make anything look good. Of course, any good artist deviates from something or challenges the status quo, even the status quo of its own foundation. See, even art has a self-destructive nature. Hello, is this thing on?

“Because I’ve been so busy lately, I’m so scatterbrained, I can’t concentrate on an elaborate, long, something … something that takes a long time to make,” Reaves’ words echoed through my head.

Just then the painter Carol Dameron called to say what’s up and I told her I was in the middle of writing about trash art and a fractional attention span. She got all fired up and said that she likes the idea of walking into a gallery and seeing a good painting, but everything is derivative, hostile and poor quality. 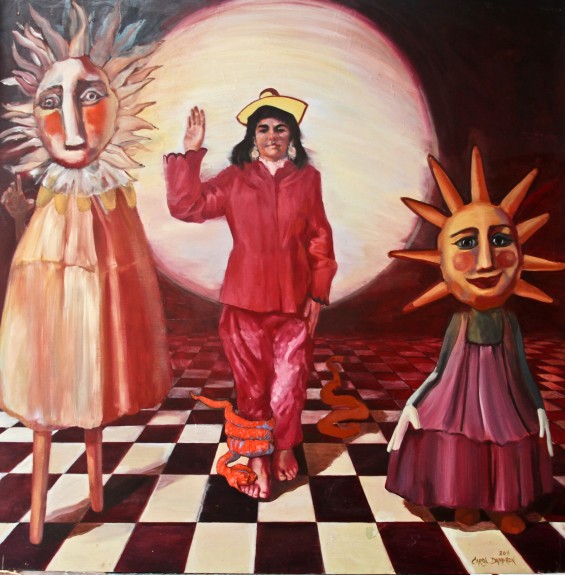 “Most of it is really frantic and dismal,” Dameron said, diving into one of her infamous sporadic art rants. “’It’s not fair to say all of it, but overall it doesn’t feel good. People aren’t even learning perspective in art school today. Even Anselm Kiefer is using perspective! You have to know, you have to have options. We didn’t have perspective in the year 1,000 but now we have perspective, so you need to know it. You need to have some technical prowess to express your ideas. I’ve found many people who are painting abstraction do it ’cause they can’t draw. They talk a lot about abstraction but in many cases it’s a limitation they’re trying to hide behind. I do see this. I think you can beef up your drawing skills.”

OK then, I said. So what do you think makes for a good abstract piece?

“Personally, I love abstraction and I think it speaks of what is unseen and unsaid,” she said. “What makes an abstract work is the same things that make a good representational piece: it’s the color and the composition and surface. The elements that go into either type of painting are the same. For example, there’s a rule about putting the larger pieces on the edge and the more detailed nearer the middle — you can have a good abstract piece and the rules still apply. Really good abstract art is really hard to do and people think that it isn’t.”

Some of the best abstract artists in Chicago are the street artists: taggers, word abstractionist letter artists. And who better to cover it than Billy McCall, who made some snappy, wonderful newscasts covering the local street art scene in Chicago, and I’ve never seen anything like it. Look for our next art & film feature on the super-underground limited film series called the Graffiti News Network.