Tripod selection. Don’t let it get you down, or destroy your budget.

As with any other filmmaking device, researching tripods will inevitably lead you to lots of posts about how you had better “buy the best one you can afford” which will lead you to purchasing a tripod you really can’t afford, which will mean you can’t afford the gas or the plane ticket to get to the shoot, and etc…broken dreams…etc….

Hey, if you can afford anything you want, take that advice. It would be nice to have a really high-dollar professional tripod, I’m sure. I’d even bet that many of the commenters on filmmaking blogs would gladly sell you one, barely used (mine’s for sale!). But, if you are on a hobo filmmaker budget here are some tips from someone who over-purchased the first time.

You do need a fluid head if you plan on panning your camera. But remember: Even if you pan with a million-dollar fluid head you won’t get a fluid shot when shooting in 24p (24 frames per second; progressive scanning, not interlaced). I’ve moved to shooting in 60p exclusively, and then using the various digital filters and timing effects to get the “film look.” Nobody’s gonna notice the tricks that got you to the film look, but that topic’s for another day.

You can handhold all moving shots, or use a relatively inexpensive Steadicam device (I use the Glidecam HD-2000 pictured below) for movement shots and save money by not purchasing a fluid head for the tripod. That said, I’d still get a relatively decent fluid head if there’s any way you can afford it. 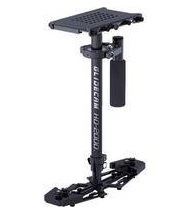 When buying a fluid head, get one with a ball leveler. This will make setting up shots much easier and faster. I regularly fight with my standard leveling tripod. I mean, I really fight with it, cursing and all. I’m stuck trying to level the tripod by shortening or lengthening the legs. It’s really a pain, especially on uneven, soft or crumbly ground. I hate it, frankly. I want to burn it. But I can’t afford to burn it because I spent all my money on an expensive tripod and I can’t replace it.

Unless you’re backpacking your gear deep into some remote location, you don’t need the carbon fiber rig. In fact, you’ll want the heaviest tripod you’re comfortable carrying because weight is stability and stability is important in capturing that pretty photography burning in your heart’s cornea.

I’ve added weight to my tripod by hanging bricks from it with rope. That’s a good trick for long shots on windy days. BTW, just make sure the bricks are blocked from the wind. I’m sure that, if you feel like it, you can pay a whole lot more money for industry-approved bricks. I haven’t looked for those but I suspect they’re available.

Make sure you buy a tripod with the leverage or crimping-style stops for adjusting leg extension lengths rather than ones with wingnut type crimpers. Here’s a picture of one from a cheap Pearstone tripod that would have been much easier to operate than my fancy Monfrotto tripod with the screw-type crimpers: 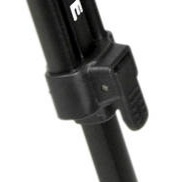 Below is what the wingnut/screw type looks like so you can avoid it (unless you want them in which case you can buy my tripod).

Scratch that. I can’t even find an image of the type to avoid. I’d take a photo of my tripod’s levers but I hate the thing so much I don’t want to even get near it until the next time I have to go on a shoot.

How did I end up with such a crappy, expensive tripod? I walked into a local camera store which will remain nameless and asked advice on tripods and was rewarded with exactly the wrong tripod for what I was planning on doing. I was told, “you’ll never need another tripod” as I walked out with the beast they’d had in stock for probably decades, but this didn’t mean I wouldn’t want another tripod. I can’t convince myself I need two tripods so maybe he was right. I don’t NEED another one. I want one, though.

A ball leveler (pistol grip if you got a few extra bucks), a fluid head, lever crimpers and some rope and bricks and you’ve got a passable tripod. Don’t listen to the folks trying to unload expensive, “must-have” dusty inventory.

If you’re shoe-stringing it, get an inexpensive tripod and save your money for a Glidecam. I use mine more than my tripod. I even use it as a stationary tripod sometimes.