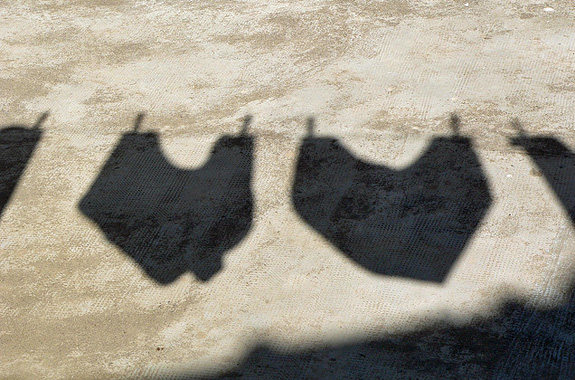 Knickers on the line.

When Peri invited me to contribute here, I was temporarily blinded by a vision of picnic tables. Picnic tables painted flat dark brown and plunked down in the middle of a cement courtyard, circa 1978 — junior high school in the suburbs. One of those tables was for the cool kids; the rest of us had to make do.

It’s not like the A-list kids wouldn’t speak to me. Sometimes they’d let me hang out with them in non-lunch venues or they’d invite me to one of their parties on a Friday night — but mostly I ghosted around the periphery of social acceptance, wanting desperately to belong but feeling somehow fatally unequipped to pull it off. I didn’t know any other kids who would take a notebook and sit alone in the downtown Denny’s, or get on any available public transit bus and ride it as far as possible for no real reason, obsessively making notes about everything that seemed wrong or right with the world and all the apparent troubles of being a person dropped into it. I felt out of step from the start.

There’s a similar feeling, showing up to write in this space — a reflexive fear of not being cool enough, not fitting in. A persistent sense that even though I’ve been word-obsessed since I was a child and any kind of living I have ever made has come through writing and helping others to write, I am still not a “real” writer. Maybe it’s the absence of prizes, an impressive sounding list of publications, or some great following, but I know I’m not the only one who feels this way, even among those of us who write every day and who are often paid to do it.

These shadowy beliefs that set us back can pop up at any time. Yesterday, I opened a book and flipped past the title page to be stopped short at the long list of other books written by the author. In this case, the list comprised 11 books of poetry, 15 novels, and four nonfiction books. Before I could intervene, the take-down voice in my head said, “That’s a writer. Not you.”

But, listen, you bad voices, now we’re going to take account to knock you back. Some of the things I’ve done with words: I had a full-time, 15-year long gig as an in-house legal writer and editor, where I wrote a few books of my own and shepherded into existence dozens of books by other writers. Over two decades, I’ve accepted an odd but constant assortment of freelance jobs, from editing academic dissertations to grant writing for nonprofits. There has also been a smattering of published poems, a creative nonfiction essay in a major newspaper, and for the past six years, a surprisingly successful blog. (“Successful,” at least, when measured by loyal readers, supportive community, and creative satisfaction. Monetization is something worth talking about another time.) And of course there are those hundred-or-so journals filled with notes about everything from stories overheard at Denny’s to some variation on the same desperate break-up story repeated at regular intervals over 20 years, until I finally figured out how to live my way into a happier ending.

Besides taking a moment to introduce myself, the point of all this is to say that it can take many years to cultivate an alert-but-gentle awareness of the voices that put us down and try to keep us away from both creative fulfillment and financial compensation for writing — and that, in truth, it really doesn’t matter how long it takes. If we want to be working writers, the only thing that really matters is that we keep showing up.

This post is its own example: If you’re invited to write, and if there’s the slightest glimmer within you that says “Yes, that’s a job I want,” do not let your psychic picnic tables pull you back in time. Just say thank you — then get to work.