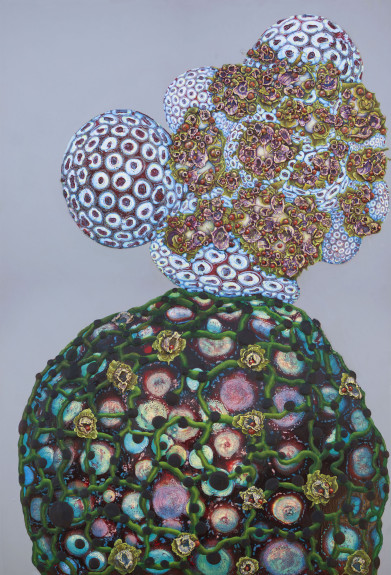 “In science there are no ‘depths’; there is surface everywhere.” —Rudolf Carnap

When Einstein discovered stored energy in what we perceive as solid matter more than 100 years ago, we gained new insight into what makes up the fabric of the universe. And with this came new developments in understanding, like how all matter is made up of virtually nothing. Through art, we manifest new areas of understanding and ideas. Without trying, art is a product of its own time and embodies discovery, reusing materials in a new light, re-configuring what we thought we knew about the physical world around us.

Flatlanders & Surface Dwellers was curated by Lea Anderson for 516 ARTS. It runs through June 1, 2013. The 24-artist group show explores the essence of surface and, invariably, what lies beneath.

“When I make art or when I’m teaching students, I draw their attention to the surface because you can kind of think of the surface as a utilitarian base onto which you put paint or do something to it to make it come alive,” Anderson said. “But it’s really the first line of communication. If you look around you, everywhere is a surface — the surface of the table, the tree bark, some kind of a surface that’s conveying information to you.”

In her curatorial statement, Anderson points out that flatness itself is its own world, that there is no “inside.” This notion is expounded upon by the author Edwin A. Abbott in the 1884 philosophical/satirical novella Flatland: A Romance of Many Dimensions. In Flatland, the protagonist (a humble square) explains the vast structure of his existence within a single plane. Who else knows so much about this flat, yet enigmatic and vitally active world? Perhaps it’s the artists who linger there.

Flatlanders & Surface Dwellers covers so many different ideas of what constitutes a surface, essentially covering the history of our relationship with surfaces and what it all means. One artist, June Lee of South Korea, approached the show’s theme by route of the sociological surface with her project “Bystander,” which references the bystander effect.

“The majority of people, when witnessing others in dangerous situations, merely stand aside in indifference or fear, and overlook them in silence,” Lee writes in the show’s catalog. “I wonder how I would feel being in this majority, part of those who would simply wait and watch, remaining a witness yet pretending not to see or hear and choosing not to take responsibility by blending into the crowd. Ironically, in a society that values uniqueness and individuality — referenced by the unique and delicate surfaces of the small figures in the work—people leave their individual selves and become a part of the crowd with a sense of invisible presence that is there but not actually there.”

Another artist also chose to highlight human nature, by way of a photo series of bone carvings made by political prisoners in Chile during its last military dictatorship, mostly at a detention center in Valparaíso. Inés Molina Navea photographs the white bone objects against similarly light backgrounds for a transparent, ethereal effect which speaks to the impact of violence on those who don’t know it, she writes. “For those who have never been tortured, an image of violence is always on the surface, like an empty word of an unknown language.”

One of the most out-there and fun pieces in the show is environmental artist Nicole Dextras’ new mini-series called Urban Foragers wherein she makes self-sustaining ecosystem dresses made of natural materials. Her contribution to Flatlanders & Surface Dwellers is called “Nomadik Harvest Dress.” This dress even comes equipped with a stove! But wait, it gets better.

“You can sleep in it like a little tent,” Dextras said. “The idea was you can walk around and grow your own food and you can move around the city and camp in community gardens and empty parking lots and if you really needed to go a distance, then the whole thing completely comes apart. It’s like a puzzle, you have to know how to do it but it’s easy to put back together.”

It’s based on the idea of a yurt, a nomadic kind of tent made of goat- and sheep-wool felt, which she lived in during an artist residency in Mongolia. Instead of felt, she used dyed, shrunken sweaters and wool coats. Many pockets all over the dress are used to store vegetables. She is working with a New Mexican botanist to gather local, edible plants to attach to the dress.

On May 11 (Salvador Dali’s birthday) she will talk at 516 ARTS about the philosophy behind her projects.

“It’s not just a talk, it’s an event,” Dextras said. “The dress is interactive. We’re going to eat food, talk about local plants; I’m going to show images of my work and maybe some video. It’ll be a fun event and I hope people come to share their stories ’cause I’m interested in learning about edible plants wherever I go.”

516 ARTS is 5,500 square feet of nonprofit innovation in Downtown Albuquerque located right on historic Route 66. The two-story art space is an epicenter of cultural art programs including exhibitions; collaborations with museums and organizations around the region and beyond; public art projects; talks and panel discussions; the 516 WORDS poetry series; workshops; and performances. Education programs include exhibition tours for schools and community groups with educational materials for teachers, youth activities and more.

Since its inception in late 2006, 516 ARTS has paved a mighty road showcasing Albuquerque as a vibrant source of creative innovation and education. 516 ARTS owes much of its success to the tireless work of executive director Suzanne Sbarge, who received her Bachelors Degree in Art History and Studio Arts from Barnard College in New York City and her Masters Degree in Art Education from the University of New Mexico. 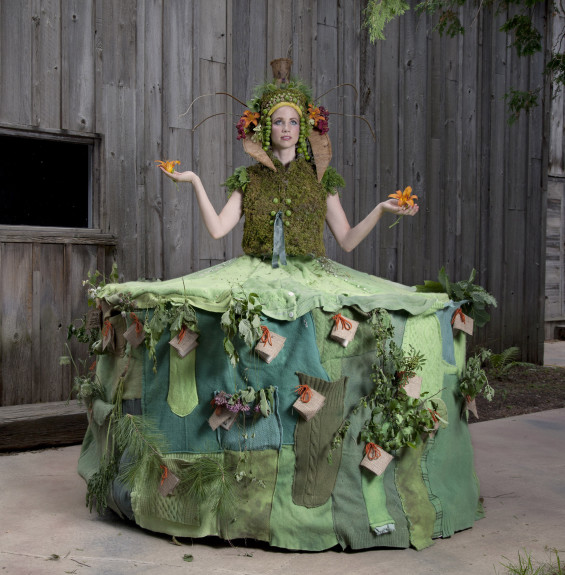 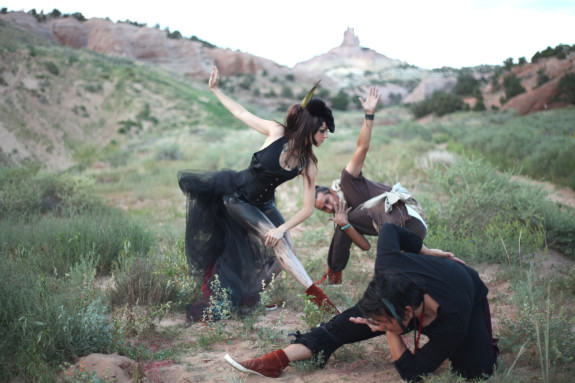 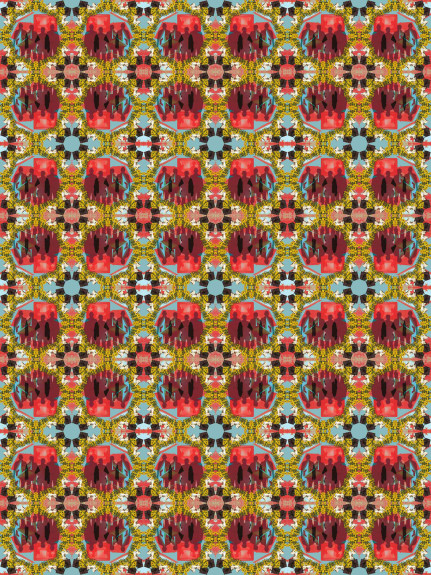 “For Bosnia” by Jennifer Cawley. 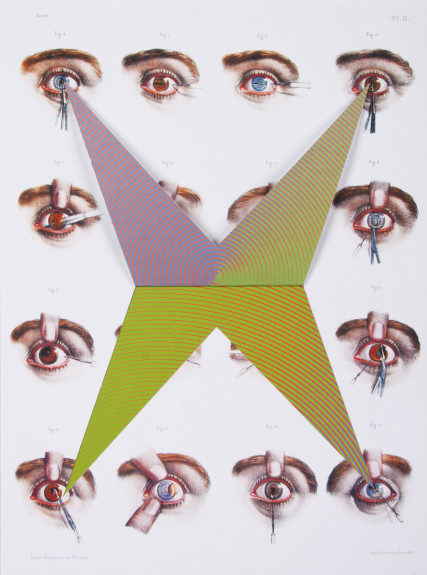 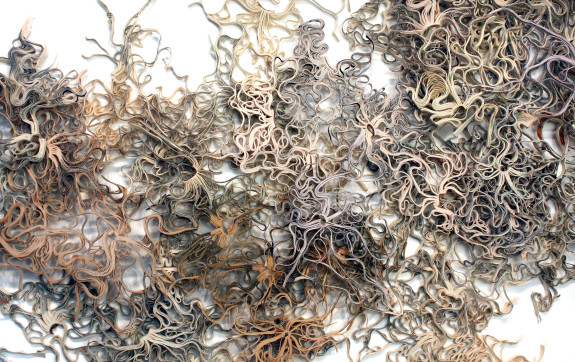 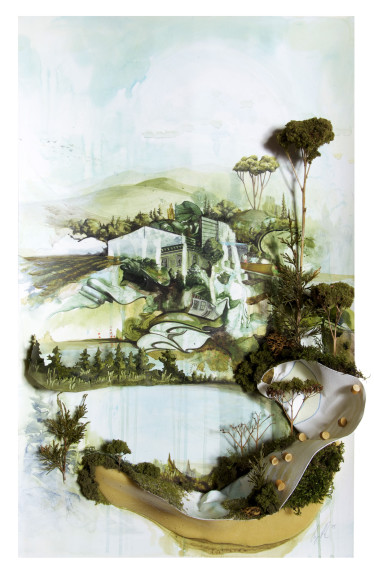 “Inside only became falling by the way rivers delivered places” by Gregory Euclide.