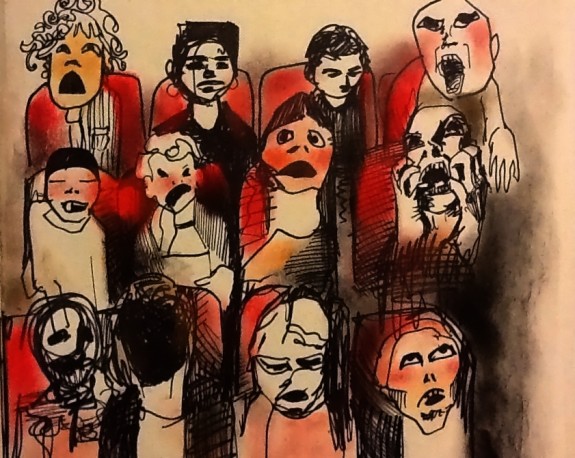 Ninety percent of the time, when people see a movie and you ask them what they thought of it, they say one of two things: Either they talk about how good or bad the acting was, or they talk about how the scenes looked visually. Or some blanket statement. People don’t usually consider the nine million other forms of art that go into filmmaking.

When the Alamo Drafthouse in Austin played Total Recall four years ago, they showed it three days in a row, which I went and saw back to back, three days in a row. This is a movie I had already seen literally 70 times. And to the layperson, this might seem like an impossible exercise in tedium. How could anyone, no matter how much you enjoy a movie, go see it back-to-back three days in a row in a movie theater?

The thing is, there is so much happening in a movie. Even if you made the movie, even if you are the filmmaker, there is still stuff you’re never going to catch on your own film, even on viewing it for the umpteenth time, and unlike other art forms, filmmaking incorporates all forms of art. So I decided on the first night I was going to pay attention only to the editing. I would only experience the movie through the consideration of the pacing, the timing, the rhythm of the performances between the actors, without getting caught up in the story.

For some people, to go and view Total Recall as an artistic experience might be a huge leap in logic, but if you approach it that way or any film for that matter, what you get out of it is a film school. A film school in your mind. No mandatory attendance. You don’t have to be a filmmaker to enjoy that shit.

The first moment in the movie where people really stop laughing at Arnold Schwarzenegger and start getting into it is the scene where he, like, karate chops a dude in the face and whips him around and breaks his neck and shoots another guy. And it’s horrifying in a way only Paul Verhoeven can do as a European filmmaker, in that he just refuses to flinch with violence. He is one of those people who doesn’t believe in glorifying violence. When someone gets shot, he wants to see their brains fly out because violence is disgusting.

The guy gets chopped in the face and the sound effect they use is not of someone getting chopped in the face. It’s like a car crash mixed with walnuts being smashed mixed with a dull cannon noise. It’s like, normally you’re watching a movie and you just feel the impact. You don’t think about what you’re actually hearing. The whole theater just goes >>HOOuuHH!!>> When you’re actually listening to it, it’s like you’re seeing the magic happen, and then you see the magic revealed to you. Like, there’s the trick. And this is a great lesson. Not only is it a great lesson in filmmaking to watch this happen in a theater, but once you realize it, and then you see it again, it just fills you with this joy of giving a little kid a Christmas present, watching their face light up. I don’t hate Christmas just ’cause I’m a Jew!

The second time I saw it I paid strict attention to the sound design, which in a movie theater, I don’t care how good your jerry-rigged Bose home sound system is, there’s nothing like sitting in a Dolby 5.1-minimum surround space with a popcorn-chewing, farting audience that creates that cinematic experience. There’s nothing like that.

Again, it’s important to add, seeing a film in the theater is the absolute best way to see a movie, especially if it’s in 35 millimeter, because that is the way the movie was originally intended to be seen (at least this is true for most movies that were made before 2006, before digital projection was slowly phased in).

For the third and last day, I simply sat in the front row of the theater so that literally nothing but Total Recall filled my vision and threw out everything I knew about the movie, and simply went to experience it in the most visceral, loud-in-your-face way as possible.

The movie’s just a fucking piece of genius.

There are so many ways to experience a movie and the bottom line is no matter how many times you watch a movie, there is a new way to experience it. People say, things lose impact that they loved as a kid; they see it later in life and are like, “Ah, that was a piece of crap.” It’s true, your tastes can change and you can grow as a person, but at the same time, the more you experience a movie the more the movie itself grows.