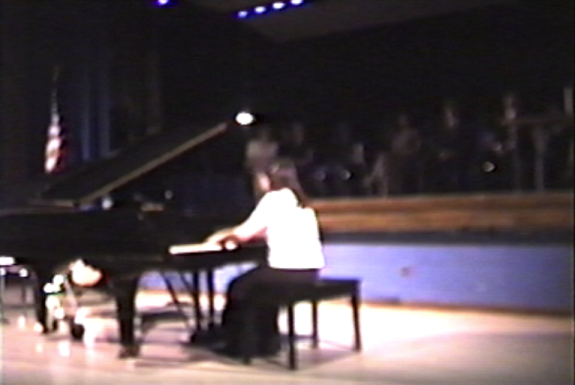 It’s hard enough that it’s a giant challenge to be enough in the forefront of any part of the music business where people actually hear what you have created. And it’s harder still when you run yourself into a rabid panic because you are so worried about what people think and “will they like it” and “will I get the gig” and “will I ever have enough money to eat something other than cat food again.” (Note: I never ate cat food, but my sister has an undying fear that this will happen to her.)

But when it comes time for you to work a gig where you have to create music for someone or perform live, I have some simple words for you: Stop worrying about what people think. Just fucking enjoy yourself already.

Now, if someone just walked up to me and said that I’d be like, “YEAH. I’ll get right on that.” I know that there are people who have the fantastic gift of not giving a shit what other people think. Well, I’m not that person. I totally care. It’s an ongoing struggle, and I have two pretty good examples of where actually just trying to have a good time and not caring about others’ opinions worked out pretty well for me.

I started playing piano when I was seven years old. During senior year of high school, I was up for an award through the Eastman School of Music. To possibly win it, you had to play three songs of various genres on a grand piano on stage in a giant theater in front of four judges who sat in the audience, taking notes. In my mind, I remember it looking something like in “Back to the Future” when those four judges sat there with their clipboards staring at Marty McFly audition onstage with his band (but way fancier).

In the middle of the first song, I fucked up. I don’t even remember how badly I fucked up (of course in my drama mind it was probably like a movie where it was all slo-mo and I stopped for about an hour, but I think in reality I just stuttered over a couple of notes).

Then in my head, I just kind of just snapped and flipped a switch. I was like, well, it’s fucking over now, you lost, but YOU MIGHT AS WELL JUST ENJOY THIS. And I completely remember slapping a fucking smile on my face and playing through the rest of my program, getting all into it and swaying from side to side like I was the piano headliner at Carnegie Hall or something. Later I found out that along with 11 other entrants I had won the competition. I think I got $500 too. But at that point just flicking this switch and being like FUCK IT was the best thing that could have happened, not only for me actually having a pleasant memory of the situation, but winning something too.

During the 17 years since then, I’ve learned to give less of a shit about what people think. I wish I could have properly internalized this lesson when I was younger. I have really gotten a lot better about trying to just do what I want (to the extent where possible) when I write music too.

As a film/video game/TV composer, you have to follow the guidelines given by the director for each scene, and/or vibe of the temp music if they provide it (placeholder music that is sometimes put in temporarily for the scene). Sometimes, there is an overwhelming amount (or complete lack) of spotting notes and instructions for what kind of feeling they want for the scene, the instruments, length of the cue, and other options that are needed (i.e. “Can we have the drums on a separate layer in case we decide we don’t want them later?”). And I’ll have no clue where to go or what to do or where to start.

Sometimes I’ll sit there and read these notes they sent to me over and over and over and end up just staring into space. And then slowly spiral into a panic and be like “I DON’T KNOW WHAT TO FUCKING DOOOOO!”

I have found that during these times, if I just kind of throw the notes aside, and just say “I’M GOING TO DO WHAT I WANT!” then great stuff happens. The very first time I was being considered as the composer for a video game, I had to do a demo for it. The guidelines were something like 13 pages long in a Word doc. After throwing about 10 small fits about what the hell to do I basically threw the notes down and said “I’M GOING TO DO WHAT I WANT!” I mean, it’s not like they said do a full orchestral cue and then I wrote an ’80s synth piece or something. I did keep in mind what they wanted so I wouldn’t write something totally random and look like I don’t even know how to follow directions.

I just started writing and rocking out — I ended up with a bouncy jazzy Randy Newman type of thing that I totally fell in love with. This is actually still one of my favorite things I have written today. (For the record, I didn’t get this game, but because they loved that demo so much they had me do a demo for a second game which I DID get! And, I’m still working with this company, which is nice.) I just kind of let all the stress go about what I thought they would think and I started writing. I tried to truly enjoy writing and really make something I would want to hear. And these are the cues that come out the best.

Don’t pay attention to what other people are thinking. Do what you do, rock out, and enjoy your process —you’ll be happier in the end.