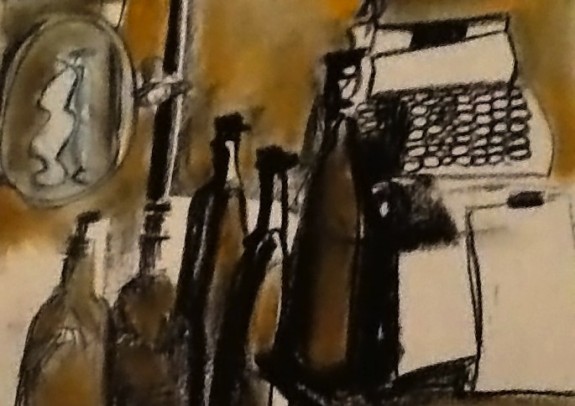 I’m a drunk. Or, rather, I’m a recovering drunk. Coming up as a writer it’s easy to romanticize alcoholism. And, in some ways, drinking is pretty romantic. From an early age, a lot of aspiring writers go through their Bukowski phase. Hopefully that ends quickly, because Bukowski was an awful writer and I’m sure the liquor had something to do with that.

There should be a disclaimer before I go on. It might be a bit premature to write this article. I’ve never written about my alcoholism. I’m almost nine months sober and I’m still trying to understand it all. Maybe this will help, though.

I got started early. I was 14 when I started drinking. Between the ages of 17 and 25 I didn’t go more than three days without a drink and between the ages of 26 and 30 I doubt I went a day at all. I was writing the whole time and at 22 I turned professional. The stuff I was doing as a journalist was pretty good, but my fiction and poetry was abysmal at best. I look back at that output with embarrassment. The best I could do was rip off Raymond Carver and, I will tell you, it was not a flattering homage.

Here was a typical day for me a couple years ago.

Wake up around 9am still drunk. Take a shower. Make coffee. Put a shot of whiskey in the coffee. Check my work email (I worked from home). Communicate with my coworkers via company GChat. Open a beer. Drain that. Open another beer (my sipping beer). Feel the wash of normality roll over me. Start my actual work.

By around 2pm a six-pack is sitting in my stomach and I’m feeling balanced again. Push through until around 6pm, trying to produce some journalism that reaches just above acceptable.

Head to a bar. I had several options depending on how wasted I wanted to get. Meet friends who had no idea I’d already consumed a six-pack (maybe more) and a few shots of whiskey. Alcoholism rarely takes the form that they show in the movies. It’s an easy disease to hide. It’s rare that I’d be falling down in my own vomit screaming at people. Take another shot of whiskey and crack open a cheap beer.

If I wanted to get wasted I’d half-jokingly chug a Long Island iced tea (because that’s funny, right?). By midnight I’d be roaring drunk and virile as hell. Then I’d go home feeling just amazing, open my laptop and write some of the greatest sentences ever poured onto paper. Then the next day, repeat.

There is one detail of my morning that I left out, though. Before taking a shower I’d peel my face off the pillow and read what I’d written the night before. And even in my still fermented state, I knew it was trash.

The sentences were an unbelievable combination of sappy and hyper-intellectual. Imagine David Foster Wallace and John Keats decided to write a mumblecore romantic comedy. The vacillation between raw emotion and failed postmodern acrobatics was tragic in a way that would make Norman Mailer’s Ancient Evenings look like Shakespeare.

But this is alcoholism. It’s a fantasy. It’s the only disease that I know of that makes you feel better when you’re in the throes of it. Or at least you think you feel better. For a long time I thought that I had started on the path to being a drunk with fervent intent. But being sober now, I realize that I’d never intended to be an alcoholic, but rather once I became one, thinking that it was all my idea was the only way to deal with it and not completely break down.

Raymond Carver is my literary hero and he sums it up best in a Paris Review interview.

“You never start out in life with the intention of becoming a bankrupt or an alcoholic or a cheat and a thief. Or a liar.”

Ray almost gave up everything for his drink and I was heading in the same direction.

“It’s very painful to think about some of the things that happened back then. I made a wasteland out of everything I touched. But I might add that towards the end of the drinking there wasn’t much left anyway,” he said to the Paris Review interviewer.

I remember reading that interview right after I got sober. I’d read it before, but mostly for writing tips. A month into sobriety I read it to understand how he stayed sober.

“If you want the truth, I’m prouder of that, that I’ve quit drinking, than I am of anything in my life. I’m a recovered alcoholic. I’ll always be an alcoholic, but I’m no longer a practicing alcoholic,” Carver said in that 1983 interview.

I showed that interview to my then-girlfriend, a brilliant abstract painter whose parents had struggled and beat alcoholism. She was in tears. As an artist she understood. We do these things that are so important to us and yet we willingly destroy them chasing an addiction.

It’s true. You never stop being an alcoholic. I will struggle every day with it. But with my amazing friends and family at my side I will stay sober. I wish I could name them all here, but I know I’d forget a few and that would be just terrible. They all mean so much to me and I would probably be pretty fucked without them.

On June 2, 2012, almost three months after my 30th birthday and 35 years to the day after Ray got sober, I gave up drinking. That was almost nine months ago. Since then I’ve written 70 good short poems, am halfway through the first draft of a novel, and have started writing nonfiction outside of journalism. Now my writing retains the emotion and the nod to postmodernism, but I’m able to pull back the reins. I can step back and evaluate it.

Emotion is a wonderful thing, but unbridled it can destroy art. I’ve always said I want to write the way Cy Twombly paints. I remember seeing his 1978 painting The Fire that Consumes All Before It. For me that’s what I strive for in sobriety, a balance of bursting emotion and playful intellectualism. That painting keeps me sober.

Now the sentences sing to each other and that song is no longer a death dirge. For the first time it’s sober, thoughtful, exciting writing.