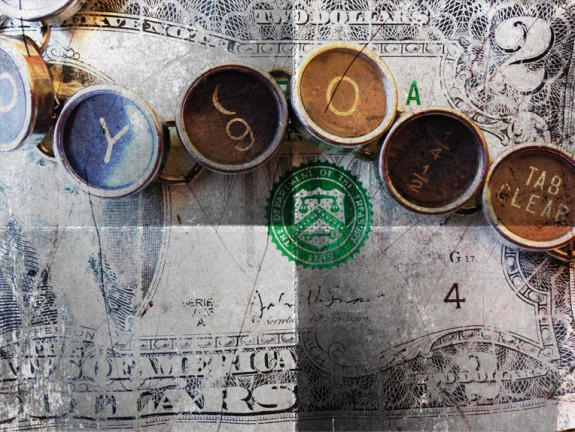 Did you catch last week’s controversial exchange between journalist Nate Thayer and The Atlantic? It’s been all over the interwebs, the latest in a surge of words and images swirling around an important topic: Why are we creative types — writers, photographers, musicians, designers, web developers, you name it — so often expected to work for free? How do we feel about that? If we don’t like it, what can we do?

To briefly summarize Mr. Thayer’s troubles, he was asked by an editor at The Atlantic to “repurpose” an article he’d previously published elsewhere. The Atlantic wanted to publish the article on its website and it didn’t want to pay for the privilege. Instead, it assumed the journalist would do the work in exchange for exposure to the website’s vast audience. Thayer’s response was a straight-up fuck you. (He was initially cordial to the editor but then published the whole of their correspondence on his blog. And when New York magazine asked him about it later, he said “fuck” at least four times. Questions of professionalism aside, the whole thing has been pretty entertaining.) The ugly twist is that Thayer has since been accused of plagiarizing parts of the underlying article; it looks like he’s not going to emerge from the fray without some damage to his own credibility.

Quick tip: If you’re going to complain about people who want you to work for no pay, make sure the work is yours to start with. You may not end up getting paid, but you’ll avoid looking like a fool and you won’t bring down the cred of other creative folks along with you.

It’s not just the Thayer kerfuffle that’s been calling attention to this issue. Just before it came up, I’d noticed a bunch of Facebook friends grousing about it, initiating productive discussions or at least giving others the opportunity to vent. This Craigslist post — old, but still funny — from a frustrated photographer in Atlanta had a sudden resurgence. 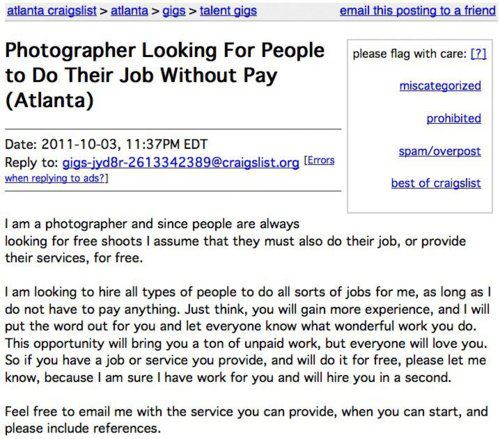 After that, there were lots of people pointing to this awesome chart designed to help us decide whether we should give away what we do or hold out for compensation.

So we’ve got visual aids, blog posts, social media rants — a whole avalanche of bother, with the weight of The Atlantic pushing the whole mess downhill. I admit, I’ve been caught up in it. One of the things that most struck me was how the exchange between Nate Thayer and The Atlantic mirrored conversations in my own email archives — minus, of course, the part where he mentions a previous offer from The Atlantic to write six articles a year for a retainer of $125,000. My inbox doesn’t look like that.

We All Have a Story to Tell

I bet a lot of us could offer examples like the following. The first one came from an editorial assistant at a magazine that publishes both in print and online:

Hi Shae: Do you do any freelance writing? We would love to use some of your work
or have you as a contributor. Our next issue features Bergamot ans [sic] we woud [sic] love to use your scrub recipe.

Hello: Thanks for getting in touch. I do quite bit of freelance writing and editing. Please tell me a little bit more about what you’d like, the pay rate, and any other details I’d need to know. I just followed your magazine on FB and Twitter. Glad to know of you!

Here’s another. I’ve changed the names of the editor and the magazine because I think that’s polite.

Hello: My name is Jane and I work for a Dallas, Texas magazine called 3480 Magazine. My photo editor has asked me to contact you and see if we could use your pickled nasturtium pictures for the September print magazine. Please let me know at your earliest convenience as we are on a very tight deadline. Thank you!

Hello Jane: Thanks for getting in touch about the photos. I’m happy to consider it, but I’d like a few more details. For what purpose would they be used, and what compensation are you offering?

You might guess what I heard after I sent those responses. I heard crickets chirping. I heard the garbage collection truck grinding up the hill in the early morning to empty the recycling bins. I heard the ascending tin-bell sounds made by my Quicken software when I open it to find that it’s oh-so-easy to reconcile my checking account because, well, there’s not much in it.

Exposure? You Could Die From That

What’s the problem here? We work hard. Our work is good. It’s worth something and we know it, in part because people are asking for it. But we’re caught in a kind of cultural train wreck: a glut of material colliding with a tough economy barreling into an unfortunate lack of courtesy and respect.

Too many of those who want our work have gotten into a bad habit of assuming we’ll be happy to give it away in exchange for exposure. (On a recent radio call-in show, one writer reminded the host, “You know what they say about exposure. You could die of exposure.”) There are undoubtedly many reasons for this, but one that we can do something about is how we persistently train people to think it’s okay. For example, writers still line up to blog without pay for The Huffington Post because the profitable mega-site promises great exposure, though Nate Silver has pointed out that HuffPo would be more honest if they phrased their pitch to writers this way:

“[T]here’s the chance that your post could do very well. But odds are that only a few hundred people will see it, and we’ll be lucky to sell enough ads on it to afford a slice of pizza.”

What to Ask Before You Give It Away

So when should you work for free? I wouldn’t go as far as to say we should never trade work for exposure, but there are important questions that can help us decide whether what’s offered is worth what we’re giving up:

All this work-for-free commotion has strengthened my resolve not to sell myself short — and other creatives, too — by reinforcing the view that we’re so hungry for attention that there’s no need to pay us. It’s not necessary to take every opportunity offered in this world where a constant buzz “must” be generated every day, often without regard to the quality of what’s being produced. So much better to consider the world we’d most like to inhabit, and to help create that world by learning when to say yes and when to walk away.