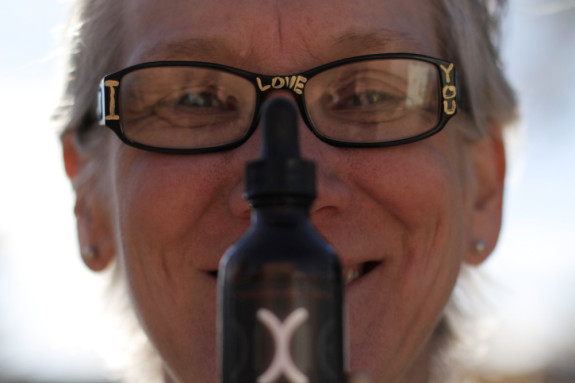 Amy Clinkscales has never been much of a pothead, she says. “I’m trying to get used to having this in my life.”

When the lifelong musician was diagnosed with breast cancer a little more than a year ago, a friend half-joked that she get her medical marijuana card, just in case.

Clinkscales didn’t think about it again for a while, not until she started learning about the interplay between cancer and cannabinoids: compounds present in cannabis. “It’s really taking off as a possible cancer fighter,” she says. So she thought to supplement her traditional Western treatment with a much-heralded natural remedy: marijuana bred to produce high levels of cannabidiol (CBD), a specific cannabinoid that research is showing to be effective in treating many medical conditions. “I wanted to add this [treatment] because there’s a lot of mounting evidence that it can either slow the growth of cancer or completely eliminate it from your body,” says Clinkscales.

During our interview, she pulls out a long, slender box about the size and shape of one that would contain jewelry.

Inside is nestled a syringe without a needle. It’s filled with cannabis oil. Every day, Clinkscales squeezes out a drop about the size of a grain of rice onto her tongue. In about two hours, she begins to feel the effects. That’s why she typically ingests it right before bed. “It’s the least obtrusive way.”

In another small dropper bottle is a second oil that she takes daily, though this one doesn’t require the same care. All the THC (tetrahydrocannabinol) has been removed, so it doesn’t make her high.

Medical marijuana isn’t cheap. The first syringe costs about $50, and she uses about one a month. “That’s using it sparingly,” she says. The second bottle is another $40 or $50. Insurance won’t cover the medicine — not for Clinkscales, not for anyone. “It’s all out-of-pocket, and it gets expensive,” she says.

Clinkscales is one of the most visible figures in Albuquerque’s music scene to deal with cancer. Longtime showgoers have probably seen her playing guitar in local venues for nearly 20 years. Last year, she boldly took those stages with a painted, bald head having lost her hair to chemotherapy.

Chemo also may be responsible for the arthritis in her hands. “There are so many side effects,” she says. But that didn’t stop her: Using a pre-recorded backing track at a festival in October, she rallied the crowd in true rockstar form. She still takes a small pill every day that contains a small amount of chemo. Her fingers are stiff in the morning when she wakes up. “That’s why I hope cannabis helps me. If I can dump the Western medicine, I surely will.”

Musicians have held benefit concerts for Clinkscales in New Mexico and other parts of the country, too. The well-loved performer made her home here in the late ’80s. When the Jenny Clinkscales Band started playing out in the middle of the next decade, she grew serious about music. More recently she played guitar with Mother Death Queen. Today, she’s reprised her love of the French horn and is performing as part of the Encantada, The Band of Enchantment, Albuquerque’s first LGBT instrumental ensemble.

Musicians are often said to lead a double life, juggling run-of-the-mill responsibilities while expending enormous effort to practice and perform. But Clinkscales has a new added “cancer life” to cope with, too, she says. Her thoughts return to the disease continually, and she spends hours in doctor’s offices or undergoing treatments.

Acting as a relief, marijuana has helped her songwriting process, she says. On some Saturday afternoons, she’ll take her dose during her waking hours, allowing herself to feel the effects. “My life is very stressful now. It helps me relax and forget about life and tune into my creative side.” She’s been prescribed relaxation drugs, too, she says, “but that stuff’s addictive.”

When Clinkscales spoke to her oncologist about getting her card, the physician said the office didn’t support medical marijuana and wanted to steer clear of the issue. A nurse recommended Clinkscales scan the back pages of the local newspaper for someone who would help her. “There’s a lot of strife between the Western medicine and non-Western people,” she says. “I am on the middle road. Right now, it’s too scary to just go holistic. I like my medical team.” That also makes it hard to tell what’s working, she adds.

But if she had to give advice to anyone with cancer, it’s this: Use cannabis in concert with lifestyle changes, get enough exercise, be aware of your diet and find a spiritual connection. “That’s what I find seems to be the way to fight cancer.”

Happily, her cancer is “asleep.” When she was diagnosed, it had already progressed to stage 4, which means the disease had spread to other parts of her body before it was caught. A year later, two small spots remain on her lungs, and they’re stable, not increasing. Her hair is growing back.

Controlling — and Researching — the Substance

It’s astonishing to Clinkscales that cannabis is a Schedule I drug in the Controlled Substances Act, putting it in the same category as heroin. Zeke Shortes, director of Sacred Garden, a dispensary in Santa Fe, says that classification is a mistake. “This is a plant-based medicine,” he says, “and should be treated as such.”

The scheduling issue makes it hard for researchers to test the medicinal effects of marijuana on humans in the United States. But mounting global scientific research — and piles of anecdotal evidence online — indicate that cannabis can combat a variety of conditions.

In New Mexico, there are 16 ailments that qualify a patient for a card (see “Medical Marijuana 101” below). Certain strains help with certain conditions, and Sacred Garden’s website breaks down which problems its plants are ideal for treating.

Shortes says for decades, breeders have been working on increasing the THC level in their strains, but that’s changing. In September, he started growing Sour Tsunami, which he estimates will have a very high CBD content and low THC content.

Art created by patients hangs on the walls at Sacred Garden. Each piece is priced, and 100% of the proceeds go to the artist. “Most of our patients are destitute,” he says. “All they’re getting is Social Security or disability checks. They’re just trying to support themselves and buy a little medicine every month.”

Shortes says he hopes the perception that marijuana is a dangerous gateway drug is changing. In fact, he says, the opposite is true: “It’s actually been shown to be a path away from the harder drugs. It helps with addiction to alcohol or heroin.”

Clinkscales agrees that the stigma surrounding marijuana is blocking its healing potential. “I’m so thankful to live in a state where we have it legalized. Because when you’re facing life and death, the fact that this stuff is illegal is so ridiculous.”

Marijuana was made illegal across the United States in 1937, excluding medical and industrial uses. It’s considered a Schedule I drug in the Controlled Substances Act, alongside severe drugs such as heroin and meth. Schedule I drugs are considered to be addictive and without medical value.

Medical marijuana was legalized in the state in 2007 but the Department of Health (DOH) didn’t finalize the rules for a cannabis program until 2009. Nonprofit producers grow the plants in New Mexico. As of late February, there are 8,577 patients in the state and 25 dispensaries.

Under the Medical Cannabis Program, patients suffering from the following illnesses are eligible for cards:

A medical provider has to certify that you have one of those 16 conditions. You’ll have to submit paper copies of an application form, a copy of your driver’s license and an information release form to the NM DOH. The department will review your information and get back to you within 30 days. If all goes well, a card will come in the mail.

You’ll have to register with the dispensaries you want to work with. There’s no limit on how many you can sign up with. Patients cannot cross state lines with cannabis. Cards have to be renewed every year.

Around the United States

Marijuana remains illegal federally, and the Obama administration opposes legalization. Nonetheless, state laws vary and are undergoing significant evolution. Eighteen states and the District of Columbia have legalized it for medical use. These include:

In Washington and Colorado, marijuana is also legal for recreational use. And 13 states have passed some form of decriminalization law.