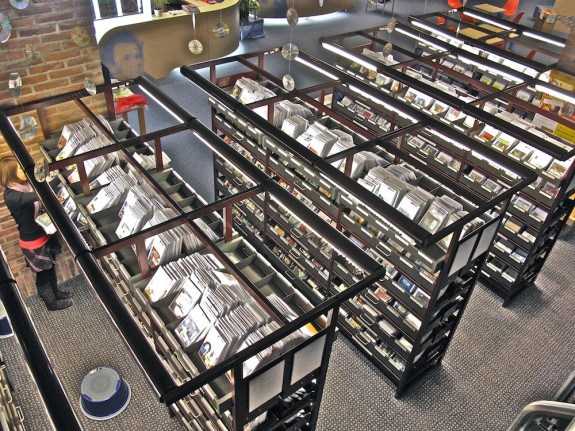 Music library companies don’t really look like this, but photos of computer servers are boring.

So in my quest to throw multiple things against the wall and hope that money comes out of it, I’ve been licensing a lot of my music to library companies. I started doing this one July when I was between music gigs, and I thought, “Gee, Christmas is coming soon and I bet someone’s going to want some holiday-esque shit!” So I asked a few other composer friends if they knew of any library companies offhand. On their initial recommendations, I started entering my music into a couple music libraries, and waited and watched as the royalties came in.  As we like to call it (and also the title of a book describing the same), “pennies from heaven.”

Now it’s not like this happened overnight or anything. I have music spread out across several libraries, which took time to generate and organize. I still have limited knowledge of this process. I have learned a ton since I started doing this in my free time, but I don’t know EVERYTHING there is to know about this.  But I like to share these experiences with people regardless because I feel it’s a great way to supplement your income if you are a musician.

Side note: Let me tell you how I found a lot of these libraries. Many I found by quickly pausing my DVR at the end of reality TV shows when the credits come up and seeing what company they used (nowadays, reality shows are using tons of library music because they can get it cheaply and quickly). I am also on this email list that sends out job offers for projects or requests for certain types of music. Every once in a while they have posts about music libraries looking for new composers. You can sign up here: http://www.gmocorp.com/subscribe/. The easiest way to find them is through a web search. There are tons of these companies out there. If you can do a little research on the ones you find and check their credits and what kinds of deals they can offer, this could work for you.

After a certain time, I developed a relationship with a few of these companies. Some on a really personal level, like we talk about our marriages. Some are one-sentence email conversations. It really varies. But what is cool about this is once in a while I get personal calls from the ones I’m closer to, and they’ll ask for random things. “Do you have any fast-action stuff with dark synth pads?” “Do you have anything that we don’t have in here that sounds like Goo Goo Dolls?” Stuff like that. And then if I have time off from a gig, I will write these kinds of cues for them.

Mind you, you CANNOT submit music to libraries that other productions own. Specifically, I’m talking about if you were hired to write music for a movie/TV show/web series, and the production company owns the music. That is not yours to pass around to libraries. In my case, the music I had a part in writing on “The Powerpuff Girls” and “Foster’s Home For Imaginary Friends,” for example, is owned by those productions and I could get in deep copyright shit if I submitted it to a library. You get the point.

I only submit music that I fully own, or if I have the time, I’ll write extra stuff and submit that. I’ve actually generated a lot of music over time with a couple other writers to the point where we’ve jokingly named our little project Factory Fromage because we can pump stuff out fast.

There are generally two types of licensing deals that you can get through licensing companies: exclusive and non-exclusive. Although every once in a while I’ll do something exclusively, I usually do non-exclusive submissions. What this means is that that music is not tied to one particular library. You can submit it for use in multiple libraries, your own movie, really anywhere — as long as all those places understand that it is to be used only non-exclusively (and you should get paperwork that spells this out).

There are pluses and minuses to each kind of library. Even though I prefer to do non-exclusive licenses, these can sometimes be a pain in the ass as far as organization and paperwork goes. Either you or someone at each library will have to rename each of your music cues every time you submit it to a different place. If you start racking up a bunch of different libraries as clients, it starts getting hard to remember when you submitted your music, which cues you submitted, and what you titled them as when you did it. I’ve been doing this for about five years, so I started a giant Excel file a while back with all the names of the libraries on it as well as what I renamed my cues for each one.

The other downside of non-exclusive licensing is that you usually don’t get paid as much up-front, or sometimes anything at all. This is where my “throwing spaghetti against the wall” analogy comes in. I figure if I just spread enough music out in many libraries, it won’t matter if I get paid up-front; the royalties generated would be substantial in themselves. Sometimes this is true, but sometimes, you only get 10 cents for a cue. It’s super random.

At times, a company might put out a generalized email/newsletter request asking for something like, “We have $500 up-front money to be split between us and you if you have such-and-such a genre with these lyrics.” The up-front money is coming from their client, be it a movie or TV show that requested that certain type of music. These situations are cool, because not only do you get the writer’s share of your royalties when they finally are processed, but you will also get some cash (in this case, $250) on top of it. This happened to me once when I gave multiple companies some music I had written for my own documentary, which was finished but nothing really happened with it. I figured the music wasn’t doing anything just sitting there, so I submitted it to various places. One company I worked for was looking for some really specific-sounding hip-hop for TV, and I suggested a cue to them that they already had of mine in their library. I got $500 up-front, and writer’s royalties too!

Exclusive licensing can be good but is more limiting. If you choose this kind of a deal, you can only use that music in the one library that you submitted it to for whatever period of time was agreed upon in the contract. Usually, because they know you can’t spread out your cues to multiple places and therefore attempt to rake in more money, exclusive companies will give you more money up-front to let only them use it. What I have found that is pretty cool is that these exclusive libraries also have bigger name clients, and/or more of the network TV time slots. (This is not the case for all companies; I’m just saying that’s what I found the few times I looked into exclusive ones.)

In both kinds of libraries, they usually set a time limit on how long your music will be a part of their libraries. Sometimes there’s no negotiating, they’ll just be like “2-year agreement with only us” type of thing.  The good thing about this is, if you don’t want your music in an exclusive library after the time period is up, you can pull it out. As far as my non-exclusive licensing contracts with each company go, most of them automatically renew after a certain time period. Just make sure you read your contracts carefully so you know everything about what you are getting into!

All in all, licensing your music can be a pretty awesome way to supplement your income. If you have extra time and can write extra music, or have music that you know you have all the rights to that you wrote for a project in the past, it could be a cool way to generate more money, extra TV credits, and more work for yourself!