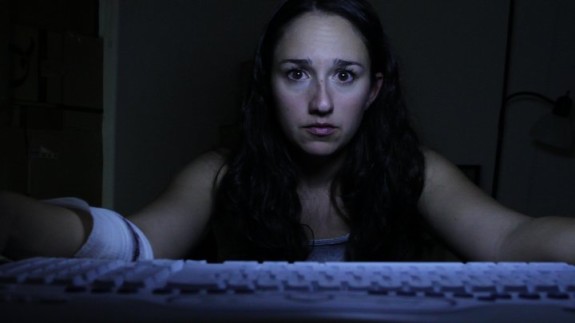 “I just ate a bloody rat!” Amelia Ampuero in SEND.

One thing I’ve heard over and over from some of my indie filmmaker friends over the years is that they don’t like working with “theater actors.”

Oft-cited reasons are that they’re too “actor-y” (whatever that means), or they’re divas, or they’re “not real,” or they ask too many questions.

That last one there is very telling. It seems to me that questions would not be a problem if you had the answers. And if you don’t have the answers, then what are you doing there in the first place?

I’m going to speak in some big generalities, so bear with me. If this doesn’t apply to you, I’m sorry. If it does, I’m still sorry … but you should probably keep reading.

My suspicion is that many of the folks who come out of film schools are, when it comes right down to it, intimidated by the theater.

As filmmakers, we tend to fall in love with the tech stuff. We love our cameras, our lenses, and our lights. We approach the films we make as an engineering problem, something to be tackled and solved. We pre-plan. We storyboard. We coordinate. We figure out what we can pull off. We build prosthetics. We organize elaborate green screen sequences. We design squibs made out of corn syrup and condoms, and rig cameras to boards for makeshift crane shots.

This seems to be the nature of the movie geek (and, come on, let’s admit it, all of us who make movies are basically geeks). We’re gearheads as much as we are artists. When we think back to our favorite movies, we tend to list all the shots and sequences that we fell in love with (the Copacabana sequence in Goodfellas? Rad! The deep focus in Citizen Kane? Super! The L-train chase in The French Connection? Best ever!) or the special effects maestros (Ray Harryhausen! Rob Bottin! PIXAR! Weta Workshop!) whose tricks blew our minds.

This is the stuff we understand. What really great actors do, on the other hand, is sort of like magic. And I don’t mean magic in some airy-fairy, dancing unicorns sort of way. I mean magic like alchemy. Like channeling the dead, or snake charming, or conjuring demons. It’s weird and it’s scary.

So we get all wrapped up in the stuff that makes sense to us and we don’t really pay attention to the performances. We may say “Daniel Day Lewis was AWESOME in Gangs of New York” or “man, Pacino really kind of sucks now,” but rarely do we know exactly why. We simply don’t have the vernacular, because no one ever thought to teach us and we never bothered to learn. I have one actor friend who told me about how she asked the director of the film she was working on a pretty basic character motivation question, and he answered by telling her what kind of dolly shot he was setting up.

Here’s the thing that all aspiring film directors need to realize: It is NOT our job to come up with cool shots.

Our job is to tell the story. If cool shots are involved, more the better. But if they’re not motivated by what’s happening on the screen — what the actors are doing — they’re merely in service of our own ego.

I’m not saying shots don’t matter. Certainly, we need to have a vision and a sense of how to tell a story cinematically. I like coming up with cool shots as much as the next guy. But we should let our cinematographers work out the details. The camera is their tool.

OUR tool is the script. And our actors. A theater actor — a good theater actor — is going to come prepared. And they’ll expect us to be prepared, too. So know how they work, what they need from you, and then get the hell out of their way.

What I’ve learned from working with really good actors is that it’s not about how clearly they deliver a line or how convincingly they portray a certain emotion. It’s about the little things, the tiny little gestures and moments that transform a character from being a plot device into a fully fleshed-out human being.

One personal example of this came while making my short film, SEND. I had been wanting to write something for a while that depended almost solely on the actor’s performance for its narrative power, to remove from my bag of tricks most of the visual/cinematic/film-school tools I had grown accustomed to. It seemed like it would be an interesting challenge.

I noodled around with the idea, but nothing really came to me. Then I saw Amelia Ampuero in Trust by Steven Dietz, at the inaugural performance of her theater company, Duke City Repertory Theatre. There’s one scene where her character discovers that her boyfriend is cheating on her, and she goes off on him — yelling, throwing glasses, the works. The intensity Amelia brought to the scene was stunning. It was her eyes that grabbed me. I immediately knew that I wanted to do a movie where the camera never left her face. And, since I am who I am and my brain works the way it does, I flashed onto an image of her covered in blood and talking about how she just ate a rat.

With that, the idea was there, pretty much whole and wriggling around like a blood-spattered newborn baby.

The rat scene was the one I was looking forward to the most, but it didn’t ultimately end up being my favorite moment. There is another, much smaller, one that sticks in my head. The second it happened on set, I knew we had the movie I wanted to make.

It comes at about 10:30 into the film. Amelia is telling us about her first excursion out of the apartment after the bomb blast, and she remembers seeing the body of a little girl in the street. The subtle shift in her eyes — the shock, the grief, the unbelieving horror — took my breath away. It still does.

I didn’t tell her to do that. I didn’t say, “Okay, now look horrified.” I didn’t even think of it until it happened.

There’s a comfort in casting someone who doesn’t have the vernacular either, because they can’t call you out on what you don’t know. You can just move them around like props and say things like “look scared” or “say it like THIS,” and they don’t know any better.

When you do that, if you’re lucky, you’ll get exactly what you asked for. And no more. Nobody’s pushing you. You’re not learning anything new. And I’ll be the first to admit that it’s much easier that way.

But if you know actors — if you love actors — and if you know to look for that spark of magic and you cast accordingly, you’ll get so much more than you ever dreamed of. You’ll get those little moments that make your movie come alive. Those actors will find things you didn’t know were there.

And they’ll ask you questions and force you to come up with answers — in so doing, teaching you what your story really is about.

But it’s not about them. It’s about us. We need to know how this shit works. And to really get to know acting — to know all the little intricacies of what it is, how it works, why it works and why it’s so bad when it doesn’t — there’s simply no substitute for the theater.

Here are a few more gross generalities that I’ve found to be (mostly) true:

1. Theater is where the training happens. Actors who go through the theater process learn technique and discipline that, unfortunately, tends to get lost in the film world, where too much of the emphasis is on what you look like and not on what you’re doing. A great many actors transition from a theater background into film work, and that’s great. But that initial grounding in the process is crucial, and I think you can only really get that through theater.

2. Good theater-trained actors can handle dialogue. LOTS of dialogue. For someone like me, who can pretty fairly be described as “self-indulgent” as a writer, this is crucial.

4. Many film-only actors want to be movie stars more than they want to act. Now, before all you film actors get mad at me, understand that I’m only talking about my own anecdotal personal experience here, and I’m not talking about all of you. People do film for all sorts of reasons: the extra money, the camaraderie, the creative process. I’ve worked with some really great actors whose primary focus is film, and I’m not knocking any of you. But from what I’ve seen, too many film actors are simply doing it for the wrong reasons. Theater-trained actors, in my experience, do it for the craft. They do it because they love it, and because they can’t not do it.

5. A great theater-trained actor will push you — the filmmaker — out of your comfort zone. And the moment you think you’re comfortable, that you have this shit down, that’s the moment you’re dead creatively.

I was lucky in that in college I managed to become friends with the theater kids and learned fairly early how to talk to them. I’m a pretty self-conscious person when it comes right down to it, so I found their sense of abandon when they were on stage fascinating. I lived vicariously through them, since I figured I’d never have the guts to do it myself (and, to this day, I don’t). I studied what they did and why they did it. And I came to love it.

I didn’t realize it at the time, but it was that love that laid the groundwork for the filmmaker I would eventually become. I still have a lot to learn. I definitely find, over and over again, that even now after about 15 short films and my first feature, I don’t quite have the vernacular down. I don’t quite understand the alchemy, and I’m not sure I ever will.

But good theater actors are also patient. And I’m trying.