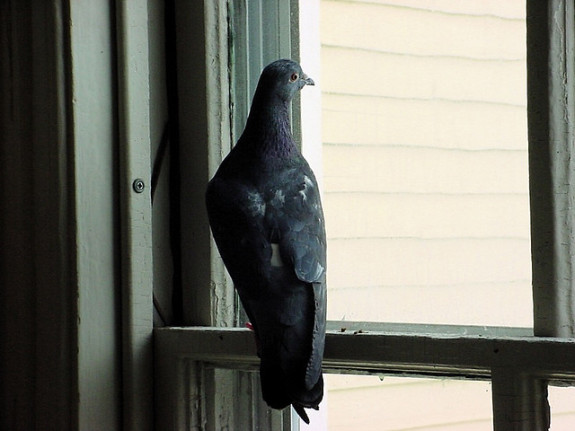 Anne Lamott is my neighbor.

We live on the same street in our hippie throwback town. If you follow her writing, so much of it about her personal life, you might find this an exciting prospect. There’s grown up son Sam! There’s grandbaby Jax! There are the two dogs and the crazy dreadlocks and, look, she got a “Who Would Jesus Bomb” bumper sticker to go with her new green Subaru.

Mostly, I’m too shy to talk to her. Sometimes I say hello when I see her walking the dogs in the street. She says hello back. That’s it.

One day, I almost ran over her twice. Once with my own Subaru, while she passed in front of me outside our local video store, and again with my shopping cart in front of The Container Store. I didn’t do it on purpose; we simply happened to be in the same place at the same time. Still, I said nothing.

This silence isn’t normal, because I’m the kind of person who regularly chats up neighbors or even the person standing next to me in line at the grocery store. “Those are nice looking eggplant,” I’ll say, even though I hate eggplant. It’s just that they are so shiny and purple that I can’t keep my mouth shut. I’ll talk to neighbors about how their gardens are progressing, whether there’s really a drug dealer living in so-and-so’s basement, when the city will send around the free chipper for tree trimmings, or almost any other topic of the day.

In the presence of my neighbor Anne, however, I’m mute.

Ttotally convinced that no matter what I say, I will sound like an idiot. I wouldn’t be the only one, of course. To see what makes me nervous, you could check out the comments of her hundred-thousand-plus followers on Facebook. They fawn. They coo. Sometimes they blast her politics — “Anyone who says they are a Christian but still believes in abortion rights is GREATLY DILUTED!!” — but mostly they talk like they’re BFFs.

“Love you so much, Annie Bannanie!”

“Thanks for taking a bit of time for all of your ‘lovers’ out there that you don’t even know much less have had sex with! HA!!! We LOVED you!”

“I wish there was a book titled First Drafts filled with all the shitty first drafts of all the great writers but mostly yours because, to me, you’re the greatest of them all.”

There are legions of fans clamoring for Anne Lamott’s attention, and I imagine when she sees someone coming toward her on the sidewalk, she assumes they’re an emissary from that chirruping horde. I’m projecting here, because I know if I were in her place, I’d want to duck and run 80% of the time. It could be that she thrives on the devotion; that she has only half that desire to flee. Whatever. I still believe that anyone deserves privacy enough to walk quietly on their own street, and I want to stay out of her hair, though if you know about her hair, you would understand how that could be hard.

The real problem may be that in my heart of hearts, I can’t quite face the truth: I’m the worst kind of Anne Lamott fan. The kind who secretly wants something from her. I leave her alone, in part, because I have an irrational fear that when I see her, I might lose all impulse control, throw myself at her feet, and cry “Pleeeeze will you read something I’ve written? And pleeeeze will you tell me it’s good? And also pleeeeze, do you know an editor I could talk to?” I suppose that makes me like almost any other middle-aged lady who writes personal essays except, physically speaking, there are only about a dozen people between me and Anne Lamott at any given time, and that makes me uncomfortable because it puts my own hunger right in my face.

Desperation aside, there are some benefits to having Anne nearby, even if we never speak.

Each time I see her, I believe my subconscious takes a memo: Dear Shae, you know that thing you are writing or were thinking of writing? You’d better get on it. And when I pass by and see her car parked at the curb, when her house is quiet and our street feels calm, my thinking goes something like this: She may be in there right now, doing her work. Don’t forget to do yours.

Her presence reminds me that consistent and sometimes wildly successful writing gets done by real people. People with dogs that get loose from the yard, people who rent videos and return them downtown, even people who buy things at The Container Store in the middle of a Tuesday afternoon.

A few years ago, before Anne moved to our street, she wrote an article for Sunset Magazine called “Time Lost and Found.” It’s a popular piece, one that still regularly makes the rounds on social media. One of its strongest points is that “manic forms of connectivity — cell phone, email, text, Twitter” will steal away our best chances at a fulfilling, joyful life.

The essay presses the issue of setting down distractions, of being awake to the moment, to beauty, to amazement. But guess who walks down the sidewalk gazing at her smart phone?

It doesn’t matter that her most primary and loveable subject is her self-described list of foibles and failings. If I didn’t see the phone thing with my own eyes, I would have imagined her always strolling about with pen and index cards in pocket, as she describes in Bird by Bird, faithfully noting every bright detail of her day. Now I’m ever-so-slightly less inclined to beat myself up about my own distracted behavior.

Last year, I tripped over one of our broken curbs while I was walking and simultaneously editing a photo on my iPhone. I nearly broke my ankle, smacking down onto my hands and knees while my precious device flew into the street. For six months it hurt to walk and every step was a reminder not to do that one dumb thing again. If I could talk to Anne Lamott, I might warn her about that curb. We might even laugh about it.