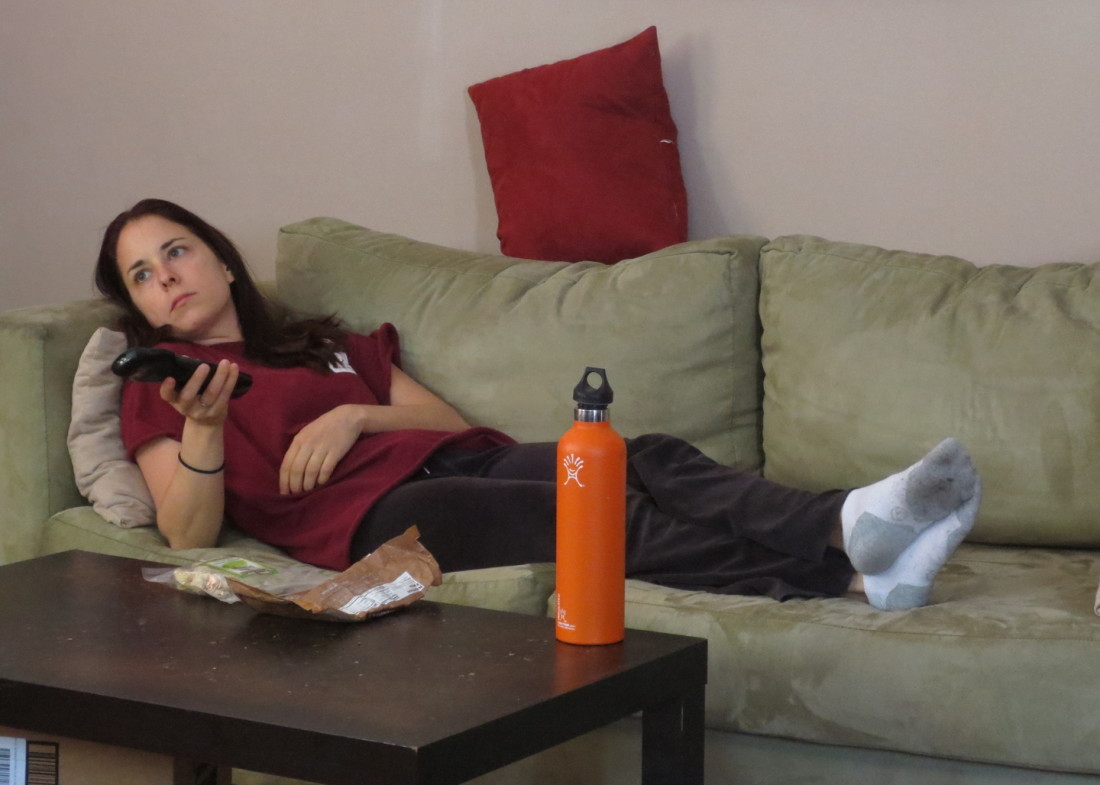 Sitting on my ass, not trying.

This topic is near and dear to my heart because I think most people are lazy fucks. Now, let me explain why before you get pissed at me: I somehow have internalized this life lesson that unless you are constantly moving around and working till you are bleeding out of your eyeballs and have no time to eat EVER, you won’t succeed. Since nothing has really contradicted this lesson in my head, I will impart a simpler, less painful message upon you that I have derived from this:

It’s really quite simple. You aren’t going to succeed sitting on the couch, watching the Bravo channel, doing nothing. I’m not knocking the Bravo channel. If they turned off all the channels but Bravo and CNN and the Food Network, in my mind I’d be perfectly well rounded. BUT I DIGRESS.

Look at the situation. What are you doing while watching the Housewives? Are you learning new skills? Are you meeting new people? Are you making money? Are you creating something PIMP ASS that you are proud of? Did you update your software? Did you practice playing guitar? Are you paying your rent? Are you in any fashion moving forward to reach your goals/dream/the place you ideally would like to be in your life? ARE YOU TRYING?

It’s not like I use this checklist every day to figure out my life or anything — I’m seriously not sitting around going, “Oh, have I met any new people today? I better play guitar!” Which, I seriously only know three chords on. It’s impossible. But the point is, you have TO FUCKING TRY.

There was one guy who lived near the fire escape. He told me he was an actor. I think he had a couple of movie credits, but obviously wanted more. I’m not sure what his “more” was in his mind, but I’m pretty sure after a few conversations I could feel safe saying he wanted to be successful enough that he was making money to live comfortably, was maybe somewhat recognizable, and was happy doing what he was doing. This guy would always say “I’m an actor” when introduced to new people in the complex.

Well, I never saw him do anything. Seriously, ANYTHING. I mean, including physically leaving the building. He would sit in the apartment, smoke pot several times a day, and watch TV. I’m not knocking pot. Or TV. I’m not trying to shit on him. I’m trying to make a point.

How are you going to get an Oscar if no one even sees you emerge from your apartment, like, ever? Are you auditioning? Not like I know anything about acting, but doesn’t it take like 107 auditions before you even get one gig?

Ironically enough, I just saw another one of these guys I met in my old building, last week. His name is Jason. This guy is the opposite of the actor guy. We were outside a friend’s apartment, hanging over the railing of a balcony, shooting the shit. I really wish I recorded this conversation. I’ll try to re-create what I think was said, because this guy is actually inspiring to me with the amount of work he does:

Me: “Dude [yes, I say dude a lot], I got confused in your Facebook thing. You said you were on the radio but I thought it was your old band? Is it the new band? You’re too famous, I can’t keep up with all your shit.”

Jason: “No you were right, it was the first band.”

Me: “What radio station was this? Obviously I totally missed all of this.”

Jason: “We were on Playboy radio and it was fucking RAD. Do you know what the listenership of this station is?”

Me: “WHAT. Dude, 7 million people heard you. Good fucking job!”

Jason: “Yeah, it’s like, finally, stuff is starting to happen with this band, and I’m like, really proud of this stuff. You know I’ve been doing this shit what seems like forever.”

Me: “Well, you work totally hard. You totally deserve all the good stuff you get. You like, never sleep.”

Me: “No, seriously, like 65% of people [wine-induced, made-up statistic] do the bare minimum, they go to some shit job they don’t like. They clock out the minute their shift is done. They don’t do anything to get any further. They complain. You don’t complain. You have like 17 jobs. You’re always out talking to people. You don’t sleep.”

This guy is nuts. He plays guitar for multiple bands (I think it’s just down to his new band now). Produces some other band. Owns an analog recording studio downtown where he records other musicians. Plays studio sessions for short films and video games. He did construction for a while. He’s constantly coming and going.

Is he the picture of success? Maybe. He might not be like, selling out arenas and making billions, but he’s pursuing projects he wants to be involved with, he’s off the couch, and he’s doing what he loves. It’s funny because I know a few people like this. Some don’t even realize they have been trying and getting something out of it until you point it out to them.

Even if you think nothing will come of it, it’s not a bad thing to TRY something. Maybe just do a little something extra during a non-conventional work period, like on weekends (like, just looking at some Photoshop tutorials, if you have a dream to get into photography, and showing up at the bar to see your friends an hour later than you would normally show up). Pick up the phone and meet up with someone who might be able to hook you up with someone else who needs an artist/writer/violinist/DP for something (you can do this while ON the couch!).

Maybe I have an overly optimistic attitude when it comes to the equation that work = results, but I think it won’t hurt you to try. Don’t listen to Yoda! If you reach for enough things, you can end up grabbing some of them.