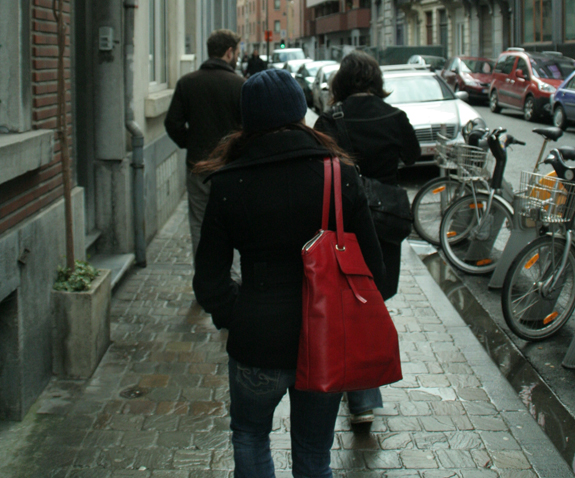 So, we were recently in Europe, and got in a conversation with this guy from Amsterdam. He had asked how long we were going to be there. We told him our plan to be in Europe for two weeks. In that time, we had already seen Paris and Dusseldorf. With our remaining time, we planned to stay two nights in Amsterdam, go to Belgium to visit friends, and finally return to Paris, then go out to Normandy. He thought it was funny how we planned this, and was a little shocked. “You Americans! You always have to push so many events into a little time period!” He said that when he went on vacation, he would spend like, two weeks in one town in Italy, and not bounce around.

Interestingly enough, he also went on to say that from what he’d seen, we, as a country in general, were very high strung about the whole thing and were working like crazy to earn lots of money to take a crazy vacation (that was my wording, not his). The conversation really got me thinking about WORK. How we work in general, and how we operate as humans in trying to live and enjoy ourselves.

I was under the impression that most Americans were perceived as lazy, so it was funny to hear him say this. I believed that what others thought all we were doing all day was playing on Facebook, or that actually, that is all everyone really is doing. Apparently, maybe not so much.

As far as what he said about working like crazy, I totally fit that bill. I think much of the US is based on the Monday-Friday 9-5 type schedule, and I’ve never really had that. I’ve written music for a few video games where the supervisors operated out of Paris. During this time, I worked weird hours, late nights and weekends. It took me forever, though, to realize that no one on the other end in France was going to give me notes on my music cues that I sent to them on Friday afternoon because they don’t work on weekends. As an artist, I was like, “whaaaat? No one is working at 3am Saturday night??” (and honestly, it’s not like I work like a psycho 365 days a year or anything. I’m freelance. So believe me, there’s a lot of downtime).

My friend Kim (who is American but lives permanently in Belgium as an artist) echoed the guy in Amsterdam. We talked about how Americans are basically stressballs, and then got into a conversation about how this, among other things, is ruining our overall health. I asked her if she could reiterate what she said at the time in an email (because like always, this conversation at the time was over multiple Belgian beers and I wanted to be sure I quoted her correctly).

I fully believe that a lot of Americans are stressed out all of the time and are totally unhealthy. We don’t know how to relax. In my opinion the culprits are TV, bad food (and people don’t have long dinners and enjoy the food and each other’s company), too much work (I mean jobs that people hate), and an idea that we have to be doing things all the time to be productive. We have forgotten how to relax, and I don’t mean in front of a TV or computer. I’m talking about meaningful relaxation: spending quality time with friends, family and in our community, being outside, walking… slowly (more like meandering), and in general just chilling the fuck out! It helps in productive inactivity, which is the key to life in my opinion.

In conclusion: I agree. It’s really interesting to get these opinions from people who don’t even live in this country. It’s crazy—I can’t get past the idea that as a musician, I must be constantly doing things and moving and if I stop I’ll be poor. And if that means spazzing out to get money for a spazzy vacation, I think I’ll still be ok with that. All in all, if I could get something from what they said, having some real down time is definitely something everyone could appreciate in life. I will put this into motion when I step away from my computer at the end of this sentence with this beer that I will carry with me to the porch.