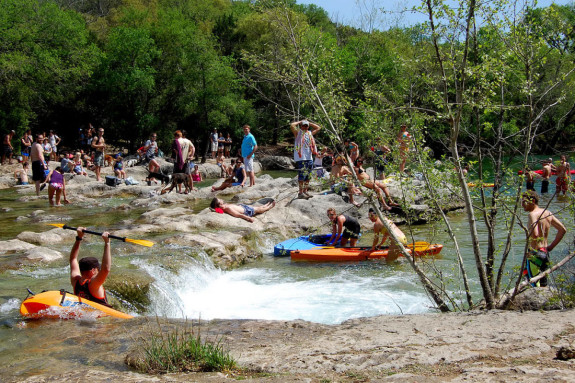 I have been living in Austin, TX for a few months now. I’ve always seen Austin as the Portland of Texas, a city that prizes itself on innovation and green practice. Austin rates regularly as one of the top cities in the U.S. for livability.

From a design point of view, what is it that makes Austin so unique? An architect told me that when people come to Austin for the first time, they wonder why it is so popular. After living here for a while, newcomers realize Austin’s charm lies in its easy way of life, ample parking, relatively little traffic, and the connection with nature within the city.

The Barton Creek Greenbelt is ten minutes outside of the city. It’s a reservoir-creek that runs like a river in the spring time through a public park space with foot trails; it’s like being out in the woods; you have easy access to nature as well as a vibrant downtown you can walk to.

But that easy way of life may be challenged. An estimated 750,000 new people will move to Austin over the next 30 years. The City of Austin urban planning response to the need for housing and how they’ve addressed this in an area called South Lamar is creating a lot of anxiety. Many condos are going up at a very rapid rate and there doesn’t seem to be a plan for how to deal with the inevitable traffic clogging this will create. In South Lamar, six apartment projects with nearly 2,000 units are currently in planning or are under construction. In addition, developers have announced plans to redevelop the strip mall that houses the Alamo Drafthouse and Highball into a more-dense multiple use project, and two large parcels on Lady Bird Lake sold recently, with developers planning condos with price tags of up to $6 million each per unit.

It is the hottest topic in Austin right now. It has been suggested it makes more sense to build these condos on Lady Bird Lake, a pedestrian-friendly part of town where all the newcomers can access all their daily needs on foot or by bike. As Austin scales up toward no longer being this easy-breezy creative sleepy town, this refugee camp for burned-out exhausted urban and creative types from urban America (L.A., New York, etc.) how will it sustain its charm, character, weirdness, inventiveness and unique character?

Why hasn’t Austin turned to progressive urban developers to find a solution to keep Austin human-scale? With the promise of out-of-the box kinds of trendsetting policies in the Green world, it’s a surprise to see the instantaneous, not-well-thought out response to residential real estate demand. Austin should look to Portland for ways to eradicate dependency on cars; instead of requiring every condo development have one parking spot per unit or the developer thinking the market needs to require this, they could think of pooling parking garages like they do in New York where a communal parking garage can be separate from the building.

With all the city-planning graduates and innovative urban designers here, it’s surprising that Austin, which prides itself on it focus on becoming as Green as possible with initiatives like banning all plastic and paper bags from stores and pulling 30 tons of trash from Lady Bird Lake, has found itself in this position.

“Austin must have a plan for jobs and infrastructure if they want to stay affordable and viable,” my architect friend said. “They might have some big lofty plan I’m not aware of and I’m scared to death of what my quality of life is going to be on that side of town. I hear all the talk in the coffee shops and hair salons — nobody is speaking favorably about it. They’re all scared and sad and wondering where they’re going to find their next wonderful small city to move to that they’re excited about.”

As an architect, my friend cannot be quoted in this article because an architect who criticizes the city’s design-planning decisions can suffer career suicide a little bit. Criticism is like mud on their face at the City. It becomes a personal issue. If you have an architecture business and you’re stamping drawings, it’s a small circle of people you’re dealing with and everyone knows each other. I was surprised to hear that because I always thought people just wanted to do what was best for the city, but ultimately, at every level, it’s just people working with other people who fall victim to the trials and pain of being people, even if they’re in a high position of power.

“It’s hard for architects to speak their mind publicly because there are costs that come with that,” the anonymous architect pointed out. “Like they delay in processing your permits and that’s a biggie ’cause you need your permits. Plan review, you won’t get the support you need in zoning variance. They actually make it a personal issue.”

One can only hope that the city can solve the problem of preserving its character while it suffers the spoils of its own success.