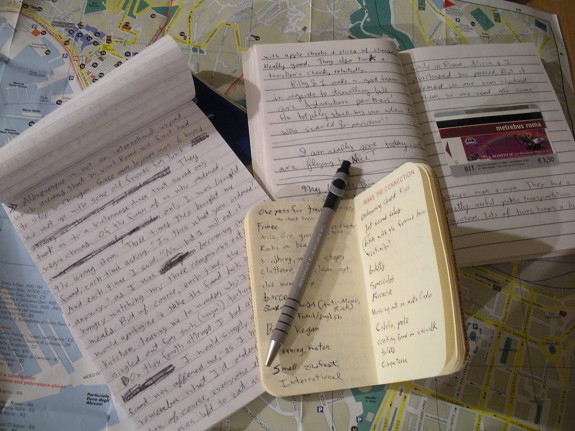 For many people, the most difficult part of packing is deciding which clothes to bring. As for me, I will simply wear whatever is clean that week.

The part of packing which always proves difficult for me is trying to decide which tools of documentation I might want to bring along. It is not a matter of whether or not I should bring along a camera, but rather it is a matter of how many cameras I should bring, and which ones. Many of my artist friends have the same dilemma; which size sketchbook should they bring, which musical instrument is the best for hitchhiking.

Written word is usually my expression of choice, so I often struggle when choosing which journal should accompany me on a trip. In general, I keep way too many journals as it is; a dream journal, a notebook for lyrics, small pads for recording quotes I overhear, a binder full of script outlines, not to mention my standard, basic journal for writing down the events of the day.

I also have an “adventure journal” that my partner, AJ, and I keep together. Any time we do something fun together, we will both write our own accounts of it in the adventure journal, which is not only a great writing exercise, but also a tad romantic.

For travel, AJ and I now have a new tradition. We will start an entirely new journal, more of a scrapbook, really, just for that one trip. We write in it, draw pictures, and tape in various ephemera from our travels. Later on, when we want to reminisce about a particular trip, we simply dig out the scrapbook we kept.

Currently we are at the halfway point of our 2 week traipse through Europe. We flew in to Rome, and stayed there for 3 days, then flew across the sea to Nice, on the eastern shores of France. After 2 days of enjoying the Riviera, we are now back to Italy, in Genova. We will be here for a couple days. Since we knew we would be moving around a lot, we promised each other we would pack lightly; one backpack each, that was the rule.

I stuffed in some clothes, a new book by David Sedaris, and only brought one camera. I also elected not to bring any journals, telling myself that our joint travel journal would be enough to satisfy my desire to write. What a lapse in judgement. 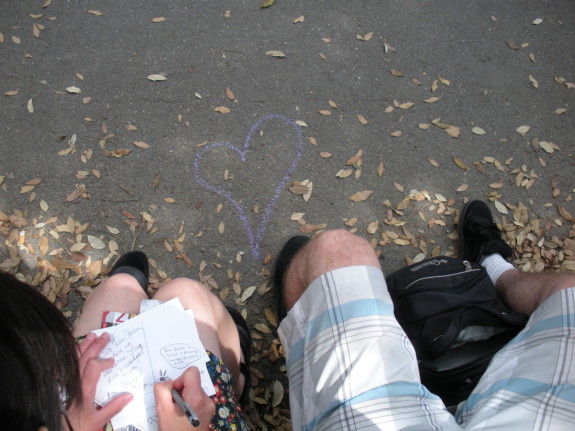 By the time we had made the short flight from Albuquerque to Chicago I was already complaining to AJ that I needed more journals. Reading David Sedaris, a man known for his compulsive journaling, did not help. AJ dug around in her pack and offered me a very small notepad, the size you might use for making lists or jotting down addresses. I thanked her profusely and immediately wrote down all the amazing events that had occurred in the past 4 hours. We had only crossed a single time zone, but already I was excited.

As soon as we landed in Rome, I made a point of finding some corner store that sold the most basic of items. For two Euros I acquired my first Italian keepsakes, a ball point pen and a lined notebook. The best things in life are free, and the next best things are not much more.

I suppose the reason I thought I could get away without bringing along a personal journal was that for that past few months I have done very little writing. These things come and go for me, and lately my attention has been focused on more visual arts. Painting and such. My true passion, writing, had taken a backseat, it seemed.

But that is what is so wonderful about traveling. You see new places, new people, new ways of life, then you somehow center back on the the simple things you have always enjoyed the most. It might be sipping coffee, or it might be taking walks. For me it is writing.

It is sort of funny that I needed to travel thousands of miles to write down observations in a notebook, but that is just sort of how it works sometimes. Perhaps I was simply in need of new things to observe. I have done more writing in the past week than the previous three months.

As soon as I see them again a whole new adventure begins. 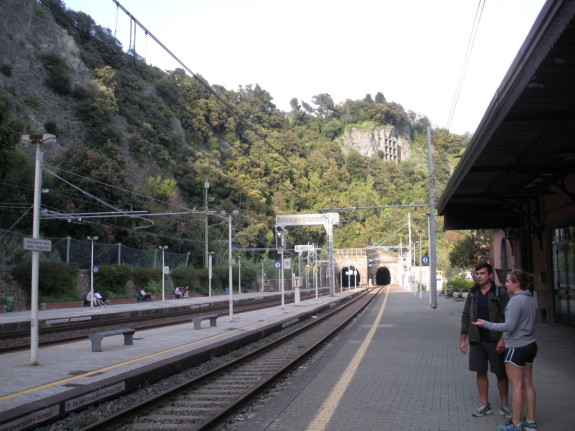