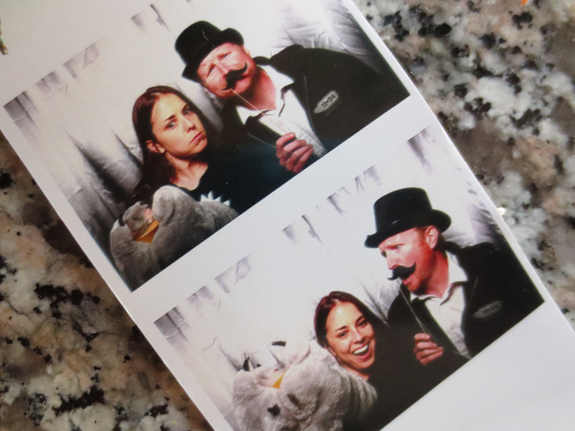 Getting our schmooze on in the photo booth.

I just got back from Game Developers Conference up in San Francisco. I road-tripped it up there with my good friend and awesome animator/game designer, Nye. According to their website, GDC “is the primary forum where programmers … and others involved in the development of interactive games gather to exchange ideas and shape the future of the industry.” I hadn’t even heard of this before Nye brought it up, but he said it could be good for us to check out. I haven’t officially been working the past few months (welcome to my freelance lifestyle), so we decided we would drive up together and see if there was something for us.

In the car, I began to believe this: “I’M JUST GOING TO WALK UP TO DUDES AND GET A JOB!” Nye says “Yeah, it’s totally not going to be like that.” Game companies fill a massive space with their games for people to play. Some companies were open for hiring designers and such, and concurrently, various talks and sessions were going on to educate people about different parts of the industry. I bought the least expensive ticket just for the expo game floor because I’m a cheap bastard and can’t be bothered to get up early enough to go to the morning sessions.

Here is my big question about this in general: Are expo event things even worth it? I think my answer is “yes?” Either way, you are making the effort and possibly making contacts and at least getting off the couch. I think most expos are not for job schmoozing, but I heard that GDC was going to be good for this. I have been to a few expos in general, most recently the Electronic Entertainment Expo last year, and have also hit up some of the gear fest things including the AES show and NAMM. These things bored the shit out of me. GDC was somewhat like Vegas: bright lights, flashy things, loud noises, and they are selling beer right next to the booths.

I get it. Some people love these conventions, get there early and stay all day, taking pictures, etc. If there was a giant cheese convention somewhere where I could taste everything and possibly have wine at the same time, I would completely understand the random technology lust that these expos elicit in people.

Driving through the nightmarish downtown San Francisco traffic, Nye was navigating (telling me where to cut people off). He started chanting the old spelled-out cheer “B-E A-G-G-R-E-S-S-I-V-E!” Which, I thought was quite relevant, as it could apply both to us and the expo itself. And that was the one lesson I learned there: Being aggressive was necessary to navigate and stand out at an event like that.

The second day there, I realized that the cheer had to be immediately be put into effect. I woke up with a whole can-do attitude, ready to GET A JOB! I’ve been working with a video game company for a while now, but obviously, more jobs are BETTER! So I was on a mission. Nye wanted to talk to the up-and-coming indie companies that a lot of people have not heard of yet. My big plan was to start off by asking every single one of them (there had to be at least 40) who their composer was, and then shoving business cards at them whether they already had a person they used for their music or not. This plan worked out OK, as I did talk to a few of the designers a bit (most of whom already had composers, and some who were there so I got to talk shop with them) and no matter if they were hiring or even remotely interested in me or not, I shoved cards at them. “HERE!” Pretty much everyone was handing out cards left and right, but I had to make sure they remembered me, so I think the conversations helped, as did the Powerpuff Girls shirt I was wearing.

There was a section of the expo called the Career Pavilion, where companies were actually hiring people. I learned quickly when a recruiter had asked me what some of my credits were that certain companies were looking only for certain kinds of music. He sort of started shaking his head in the middle of my sentence and was like, “we’re looking for dark stuff” and kind of moved on to the next person. I decided to change my tack to be more obnoxious in this arena. I would ask if they were hiring composers, and even if they said no, I would again shove cards at them and say something along the lines of “I can do all kinds of genres, and I’M GOOD AT EVERYTHING.” Once I got the flow going, this worked out pretty well, even if they weren’t hiring. Some recruiters chuckled when I used that line. Some recruiters were really cool. One company even offered for me to come over and see their facility.

The best example of being aggressive and obnoxious was when I unexpectedly got an invite to a private schmoozing party after the expo. I probably got it because I was one of only four chicks there in a sea of at least 100 men. But I didn’t care! Better odds for standing out! It took us a while to get assimilated, because, if you have ever been to anything like this, it’s people standing around in little groups, drinking slowly, not mingling at all. We went to the bar, and I kept my eye on everyone getting a drink. If anyone within a 15 foot radius of me even turned remotely in my direction and were holding a glass, I would pretty much smash my glass into theirs and shout “CHEERS!” Most people were into this. People like alcohol. We met tons of people by the bar, and I was very excited to have obnoxiously “cheersed” someone who was a producer in one of the biggest games in the country today and ended up having a long conversation with him. All in all, I think we did well. And, at the very least, I got free wine out of it and had a pseudo-vacation with a friend.

So, if there is a lesson to be learned, I suppose it’s that BEING AGGRESSIVE when it comes to your career can’t hurt. Will all this cheersing get me a job? I don’t know. I’ll keep you posted. I know it is closer to getting me a job than if I stayed in LA and watched the Bravo channel. But I think overcoming a possibly uncomfortable situation by doing something other than just standing there was a big step.