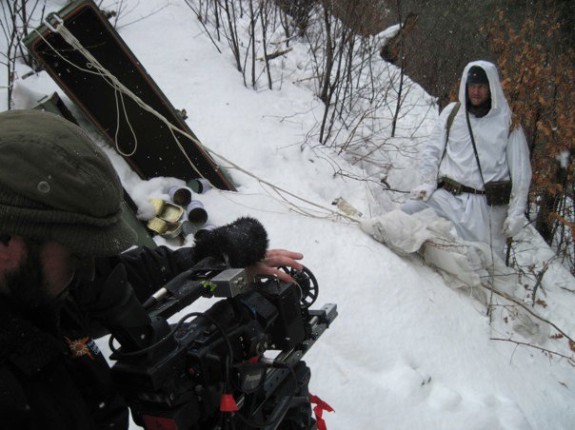 It was December 2009 when my longtime cinematographer and best friend Corey Weintraub called me.

“I just talked to Morse and it turns out he speaks Russian,” he said. “We need to do a movie where a Soviet soldier is trapped in a bunker in Siberia or something and he’s being menaced by gremlins.”

The Morse in question was Morse Bicknell, an Albuquerque-based actor. At the time, I didn’t know Morse well. He was fairly new to acting. I had seen him in one or two plays and a couple short films and had chatted with him at theater parties here and there. I knew him as a quiet guy, kind of reserved, but always nice and clearly a very talented actor.

“Done,” I said without hesitation.

It should be noted that, in the strictest sense, it is not a cinematographer’s job to come up with the story. I’m the writer. That’s MY job. But this is how things tend to go with Corey. Corey has an active and adventurous mind, and like me, his imagination runs dark. It’s not unheard of for him to precede a location scout by handing me a shotgun and saying, “If something happens out there, cover me.”

Early in our working relationship, he flew to Boston to help me shoot a short film. On his first night there, he knocked on my bedroom door as I was getting ready to go to sleep and tossed out an idea about bank robbers using machine guns spray-painted orange so that they looked like toys (I still want to do that one someday).

A year or so later, I was back in Albuquerque and we were preparing to do the 48 Hour Film Project. We were sitting in a bar, brainstorming scenarios and possible locations, when Corey mentioned that our friend John Bustamante “has this fucked up, creepy freezer in his basement. Why don’t we do a movie where a guy has a dead girl in his freezer?”

The result of that was “Sweetie,” which won the 48HFP/Albuquerque in 2007 and went on to win third place internationally (it was the top American-made film that year) and screen at the Cannes Film Festival in 2008. It cost us $200, took two days to make, and six years later is still probably the thing I’m the most known for in New Mexico. All because Corey remembered that John had this creepy, fucked up freezer in his basement.

In film school, we’re taught to fall in love with the auteurist ideal — i.e., that the director is the sole author of the movie. The French came up with it and applied it to everyone from Hitchcock to Howard Hawks, facts be damned. Now, 50-some years later, we’re still the thrall of that notion. Film students WANT to think they’re all geniuses with their own unique and personal visions. They look at Stanley Kubrick doing his 30 takes of an eye blink and say “yeah, that’s how it’s done.” So what you tend to find on a film-school set is a bunch of people who think they should be the director, and not one of them who wants to be the guy holding the boom pole.

The problem with all this is that, at its core, the auteur theory is an ego-driven idea. It’s about the idea of ME rather than US. At its best, I think it makes things difficult and inefficient. At its worst, it leads to the stifling of creativity because “that’s not my idea” becomes the operating principle.

So I call bullshit on the auteur theory.

Does a movie need a director? Yes. Does that director need to have a vision? Yes. Should a certain set hierarchy be maintained? Absolutely. Movies cannot be made by committee.

But that can — and is — too often taken to an extreme that hurts the movie rather than helps it.

If I were a true auteur, when Corey called me with his Soviet-bunker/gremlin idea I would have said, “Stick to your job, camera boy.” (Okay, maybe not quite like that, because he has guns, but, you know, nicer.)

Instead, my reaction whenever Corey comes up with one of his ideas is to remind myself how lucky I am to have someone like him in my creative life.

In 2006 Corey and I teamed up with Mary Holyoke to create a “company” called Trifecta+ Entertainment. Our conviction wasn’t necessarily that we were the three best filmmakers in Albuquerque, but that we just might be the weirdest. The joke about us for the longest time was that we couldn’t be together for more than five minutes before the conversation inevitably turned toward cannibalism, horrific murder, or the impending Apocalypse.

That’s just who we are.

So the three of us decided to pursue, together, what we thought was a unique and personal vision based on our very similar sensibilities and morbid imaginations.

The operating word there is similar, not shared.

We are not a hive mind. We all come at it from a slightly different direction. My ideas were formed by an odd combination of pulp horror, theater, gangster movies, and David Lynch. Corey’s imagination was colored by westerns, classic Americana, military history, and war movies. Mary brings an even more outsider perspective that draws from a chaotic combination of dark European art films, music, literature, and politics. Yet, somehow, we always kind of end up in the same place.

Together, in our somewhat grandiose imaginings, we formed a “trifecta” of strangeness. The “+” in Trifecta+ is everyone else who comes into our sphere to add to the vision.

The point here isn’t to talk about how awesome we are, but rather to stress how, for better or for worse, we have come to value a collaborative vision built around our own dark obsessions. It’s the combination of our individual ideas and influences that gives birth to this new thing that no single one of use could have created on our own.

The Soviet-bunker/gremlin idea is a perfect example. Two things collided in Corey’s head — the fact that we know an actor who speaks Russian, and an old Looney Tunes cartoon he stumbled on that served as pro-Ally propaganda in World War II. In the cartoon, Adolf Hitler is trying to fly a plane into a dogfight, but is stymied by a mischievous gremlin that keeps trying to take the wing off the plane (like the Twilight Zone episode starring William Shatner). The point was to make Hitler look ridiculous, and it used an old Royal Air Force joke as its basis — whenever one of their planes would break down, the RAF pilots would blame gremlins for the malfunction.

As soon as Corey pitched me the basic idea, I grabbed onto one of my common themes — insanity and loneliness — and started wondering if the guy had cracked up from the isolation and it was all in his head (to this day, I don’t know the answer to that question). I had also developed my own obsession with a disturbing bit of Cold War history —the Soviets had developed a 57-megaton hydrogen bomb in the early 1960s, one quarter the power of the Krakatoa eruption and 1,400-times the combined power of Fat Man and Little Boy.

I’m not sure which one of us found out first about the phenomenon of “ghost numbers” — mysterious and obviously coded radio broadcasts consisting of odd sounds and seemingly arbitrary strings of numbers, clearly serving an espionage purpose and whose existence has been denied over and over again by governments worldwide. Whatever. Doesn’t matter. One of us did, and that was the final piece of the puzzle.

All of this combined to form the basis for what would become “Vanya,” a 28-minute movie we shot in Albuquerque and northern New Mexico in 2010. It’s a weird little movie — too long and slow to really be a short film, but too short to be a feature. We culled our visual style from multiple sources — horror movies, paintings, photographs — but our single largest cinematic touchstone was Wolfgang Peterson’s 1981 German submarine epic Das Boot. Corey went to work not only developing a lighting scheme, but also collecting as much legitimate Cold War-era Soviet props and wardrobe as he could. I spent about a month and half polishing up the script.

In the end, “Vanya” is probably my favorite thing that I’ve done so far. I sort of describe it as a “Twilight Zone” episode by way of a European art film.

This is the way we’ve always worked as a unit, and frankly it’s the only way I would want it to work. To simply pigeonhole Corey as a cinematographer or Mary as a production designer — or, frankly, me as a writer or director — is to deny the shared nature of our collaboration. When it works, it’s magic … for us, at least.

Here’s the point: find your team. Look for people who know what they’re doing on a pure craft level, yes, but also people who will get where you’re coming from creatively. Look for people whose work you admire but also whom you like to sit down and have a beer with (or go to yoga with, or go on a hike with, or have sex with, or whatever). Look for people who don’t think or look at the world exactly like you do, but who in the end come to the same conclusions. Those points of convergence are where you’ll find the most interesting ideas.

And, once you have your team in place, let them be creative. Don’t think they’re there to serve your vision, but rather realize that they’re there to add to it. To build on your ideas and to let you build on theirs.

I can’t promise you’ll make a good movie. But I can promise it’ll be a lot more fun that way.