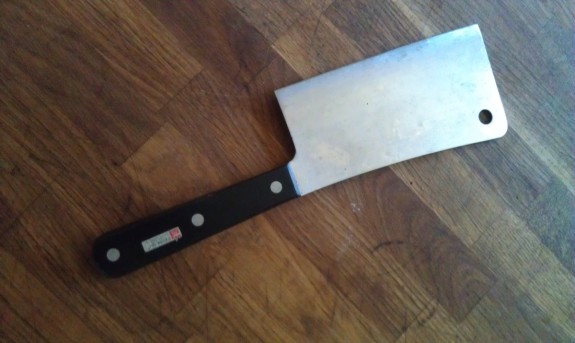 We love to watch X Factor, or whatever, to see the train wreck. They get up there, ready to sing their hearts out, and they do. Except they are completely awful. There is a certain joy in watching someone fail so horribly at their life’s dream, and there seems to be no end to the supply of those who no longer want to slave away at Arby’s, work in the back of a Wal-Mart, or take overweight disability to suffer the burden of the need to sing for the rest of their lives. There are a lot of folks pretending to write in coffeehouses writing down important thoughts, too.

They don’t have anyone in their lives that loves them enough to tell them the truth.

The first draft is the furthest from the completed work. And, handing it over to someone often feels like sticking your hand into a saw or it feels like doing this. (We’ll get to dealing with rejection in another post.) You need an editor! You need a critic! Your story stinks. Nobody wants to read it. They’re not going to find your diaries after your death and publish them. Your song is drivel, and you know it. You’re either one of the rare people who don’t care at all, or it requires the engagement of others. While you can self-publish, most of what gets put up is vain, self-aggrandizing crap. If it could suffer the scrutiny and approval of someone else’s eyes, it might merit more attention.

You need criticism. You need practice in hearing how other people don’t like your stuff.

You probably need to build a circle of like minded people, like some Sheryl Crow Tuesday Club songwriter thing where you listen to each others bullshit and try and offer suggestions. Here’s how you take criticism: you seek it out. You relish it.

Repeat after me: Everyone who bothers to listen to your shitty band, or help with your unfinished work can help it to get better. You need their feedback. If you’re lucky enough, you’ll work with an editor–I’ve had some fantastic ones, including Hank Stuever, multiple-time nominee for the Pulitzer Prize in Features, currently the Arts and Entertainment Television reporter for the Washington Post.

Hank has keen insight, and a willingness to work with raw writers (I’m sure I was among the rawest) in the best Proustian manner. We were working on creative nonfiction in a glorious bubble at a doomed afternoon daily, The Albuquerque Tribune, left to tell stories that were overlooked by the daily paper of record (before the many free weeklies), and weaving bits of stories and narratives about rock bands, culture, music and things that can be hard to quantify. I found myself having difficulty making sure that the words on the page matched what I was trying to say.

Often it didn’t. He would tell you when it sucked. Often what I brought to the editor was a jumbled mishmash. Crazy people make good therapists. He was a crazy story therapist.

“Is there an easier way to say this?”

“This seems complicated, I’m not sure I understand this.”

He would de-personalize the process of reordering:

“It seems like this part of the story wants to go here.”

“This works, but I’m not sure where to put it.”

And, when one gem didn’t quite make the crown, it was always

“This is good, but it’s not helping the overall story.”

He fought to make sure that my “voice,” the words that I chose in the way that I chose them made it to publication. We were allowed to make mistakes in print. All of these things brought me to want to work with him. Most editors I’ve had have some of these qualities. We’ve all got egos here. And now, many years later, after I write, I read what I wrote. To find the faults.

You’re writing to be noticed, to be read, to have your ideas expressed. Great. Lots of published and successful people have done so without editing. But whether or not you have a gentle editor, you need one, because your work is shit. If you can’t find someone to edit your work, then read the piece out loud. You will find the rotten parts. There is always something in your work that could be better.

If you believe in it enough, you’ll revise, recast, cut 20 percent, redraft, rework and resubmit. You don’t want to be the train wreck.