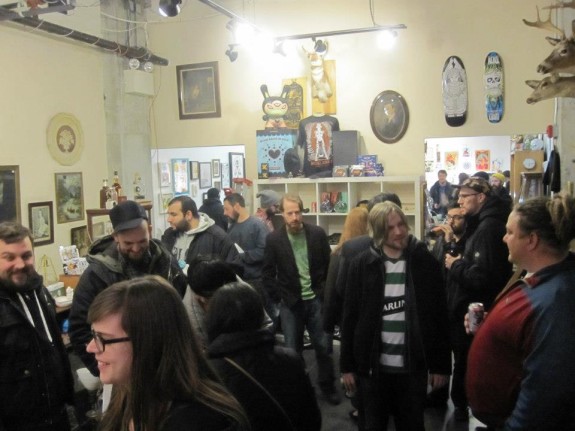 I co-ran a gallery space called PHANTOM HAND for 6 months, starting in December of 2011. It was a pop-up gallery on South Street, made possible by the truly awesome efforts of the Arts on South initiative. This admirable Philadelphia program was designed to fill vacant storefronts with art groups until a renter can be found.

The deal we had with Arts On South was pretty much the perfect situation for a bunch of scumbag low-brow artists like us. We paid no rent, just utilities, and had all the empty wall space we could ever hope for. The only downside was the ever-present threat of this great space being rented out from under us. It was in the contract that if there was ever a real tenant willing to pay rent, we had to clear out to make room. This was an inevitability from the start but still stung pretty bad when it inevitably came to pass.

The experience was surprising and occasionally frustrating. Overall, it was overwhelmingly positive, and often bordered on exhilarating.

Those of you familiar with Philadelphia will know that South Street is not exactly a hot spot for the arts, nor the free-wheelin’ hippie destination from the song that bears its name. In the last decade or two, South Street has gone through a few transformations, from vaguely counter-culture minded, to fairly corporate, and most recently to a kind of head shop and cheese steak cornucopia with some small business sprinkled throughout. It’s a strange atmosphere over there, and what really surprised me was that it turned out people were starved for some culture!

PHANTOM HAND did shockingly well for a group of local scumbags throwing prints on the walls of an abandoned Foot Locker. I can’t count how many times we heard “I’m so glad you guys are here,” and “I didn’t think things like this existed on South Street anymore!” This, coupled with actually WATCHING work fly off the walls was unbelievably encouraging to me.

As a freelance illustrator, I live in kind of a bubble. I make work, I give it to my client, I eventually put it on the internet and hope it gets noticed (and in weaker moments, obsessively check to see if I’ve gotten any likes or reblogs). This can’t compare to the feeling I got from actually handing my work to someone, literally looking my public in the eye! This motivated me to make more work, try new things, and allowed me to see how those experiments were received. I can’t say enough about how valuable and inspiring this was to me.

Sometimes it can start to feel like art doesn’t matter to people, and this shop completely disproved that theory.

Of course there were also daily visits from local crazy people out to seduce our intern, recount their most recent stalker letter to Tina Fey through a mouthfull of crushed ice, or accuse us of elitism/fascism for not showing their drawings of Goku and Rihanna smooching. These kinds of interactions ranged from frustrating to horrifying, but ultimately these people were completely outnumbered and overshadowed by the positive.

The hardest thing to deal with was also, in fact, kind of exciting. We had a LOT of people come in hoping to hang art on our walls. Some seemed to think we owed it to them to show their work (which was pretty infuriating) and explaining that art is a business and a skill like any other, involving technique, practice, experience, etc was pretty tricky.

But what this says to me is a large number of people are not only interested in art but want to MAKE art. They want to be a part of this crazy thing that I am compelled to do every day. That’s kind of a big deal to me, and really anyone who makes art.

And then the space was rented by what amounted to an Amstel Light billboard. The space wasn’t even being used; they just threw a big ad for beer in the window and kicked us out. I know this was the deal from the beginning, but it was more than a little crushing to see what we were being replaced by, especially after all the positive reactions from locals and out-of -towners alike.

The good news is PHANTOM HAND has taken up residency in JINXED, a small boutique in the piazza area of Northern Liberties, and while it’s not exactly the same situation, I can already feel that enthusiasm creeping back into my brain. Sometimes I find myself waiting for some kind of encouragement from the universe. As it turns out, there’s no better way to find it than to get your work onto some walls surrounded by art and artists you respect.

The glory of PHANTOM HAND is the kind of DIY spirit of it all. In the first building, we had blank walls and enough prints/paintings/whatever to cover them. It was a rare glimpse at the perfect scenario — art, inspiration, community and room to make it all happen without the usual speedbumps like rent. We made the absolute most of an abandoned store front and it felt significant.

Feels good to be back!