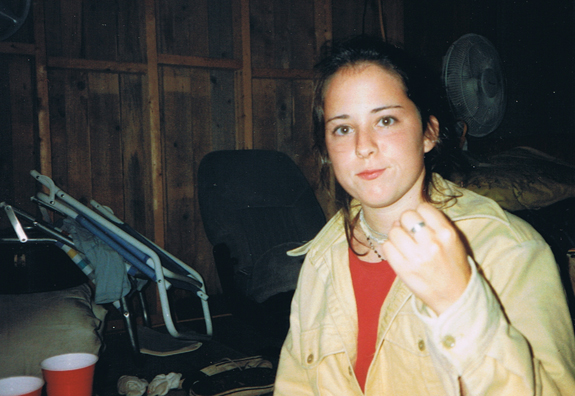 Young Jen about to give the finger to elder Jen’s advice list.

I’ve been reading a bunch of these lists lately that are being passed around on Facebook and also places like the Huffington Post (and actually, if you do a Google search you can find a billion of them).

These are about people who have suddenly have had these epiphanies in their 30’s and how they make these discoveries into lists and then publish them, wishing their younger selves had known this.

I’ll give them this: The older I get, the more I wish I did know when I was younger.

However, sometimes these lists these people make kind of piss me off. They are very hippie-esque and have statements like, “Be present!” and “God loves you!” and “Save money!” I mean, that’s good advice, but I’ve got some fantastic tips which are way better so you should probably print this list out and paste it on your fridge right now.

Here’s my big fat list of advice for young Jen:

Drink way more. Let me elaborate. I did drink a lot when I was younger, especially in college, anyone can tell you this. However, my 18-year-old body is not this body. I have 4 drinks now and I’m down for the entire day the next day. The hangovers are way worse than they once were. No one tells you these things. When you’re 18, it’s easier to shake it off like it was nothing. Which leads me to my next list item.

Do some marathons or something. Let me repeat: my 18-year-old body is not this body. I’m in great shape, but can’t stand/run for long periods of time. I have plantar fasciitis (foot issues). My hip is jacked from doing too many “Insanity” sit-ups. I’m basically a senior citizen, and I’m not the only one, people. When you’re younger, you’re basically like the Wolverine. You can run a marathon. It hurts. You regenerate quickly. It’s fucking awesome. That is why all people in the Olympics are like 12. I would like to tell myself to please take advantage of this and run multiple races/do Tour de France, etc.

Learn more skills early. I find the same conversation coming up with various people in my dance class: That we’d all wish we’d started lessons sooner, so we could be total pimps now. When you start younger, you just basically absorb this kind of stuff into the framework of your soul. You become awesome with practice. This also applies to languages. I wish I was quad-lingual. There are obvious correlations for children who learned languages early versus those starting when they are 14. I would like to tell myself to take dance, learn 10 languages, and pick up as many ninja skills such as karate and parkour as early as possible, please.

Don’t give a shit what other people think. I’ve pretty much beat this lesson into a dead horse. See previous blog posts here and here about this. It’s a hard lesson to internalize, but later on in life, you’ll care a lot less about people’s opinions on shit you want, and you’ll wish you knew this earlier. Because it’s true: You should do what will make you happier in the end.

Appreciate your friends, because soon everyone will be birthing children and disappear. People hit 30 and suddenly the Facebook newsfeed is filled with random pictures of babies in various positions in various costumes and in various chairs passed out and no one can go to Vegas with you anymore because they go to bed at 7:00pm. Sometimes, the friends with new kids just completely drop off the face of the planet. We call this “the first year casualties.” They usually come back around later when the children sprout teeth and start eating cheesesteaks and what-not, but I would just maybe appreciate the times with my pre-children friends more since it’s usually different after they give birth.

No one looks at your degree. No one has ever asked to see my college or high school degrees. People have asked me where I went to college, but not for the paperwork or grades. I’m not saying flunk out. I’m saying the difference between an A- and a C means nothing if you are going into an arty career like me. I get it if you are going to medical school though, you have to have the grades. But I would tell my younger self to work more on developing skills I would need now, like being a master at computers, or learning how to change the oil in the car– things of this nature.

Don’t be a cheap bastard when it comes to buying bigger items/technology. When I moved to LA, I had no money. So, a lot of times I would buy cheaper stuff, which 1. wouldn’t last, or 2. I would outgrow and would need to replace later. Case in point: when searching for a car on Craigslist, I opted to buy the cheaper blue Honda, instead of the purple one that was $1500 more but was in better shape and actually had an alarm on it. And later I ended up dumping tons of money into fixing my little blue Honda which eventually earned the nickname “Cursed” because it had so many issues. I’m not saying “BUY A MERCEDES” or anything. But get something that is quality and will last, and if that means throwing a bit more money at the problem, then do it, especially if you are looking for items for your business. Quality shit is good shit.

Listen to your elders. No one wants to listen to the pieces of advice their parents or boss give. Especially when it’s something that is not really “advice” but is more like a statement like “THAT’S A HORRIBLE IDEA!” or something in that fashion. Sometimes, these people actually know what they are talking about, like when they tell you things like “go buy a blazer” (translation: stop wearing shirts with holes in them to work) and “stop spending so much time with that other dude when you are dating your boyfriend”, and you respond “WHATEVERRRRR, leave me alone!” (PS: not saying those exact sentences were said to ME, I’m just SAYIN’.) Lately, I’ve been looking back on some stuff (maybe because I’ve been reading everyone else’s advice lists online) and I’ve actually remembered a bunch of times where elders were telling me what or what not to do, and I can appreciate that they were right at that point. Grown-ups have been through some shit. Sometimes, they know more than you do.

Anyways, that’s all I’ve got for now. I’m sure there is tons of advice anyone could give their younger selves. We all screw things up and wish things were different. The point of life is that you learned something. In closing: my friend Larry said to me about my list, “maybe you should do one on what 60 year old Jen would say to 35 year old Jen.” Which gets me thinking even more, what would I change now?