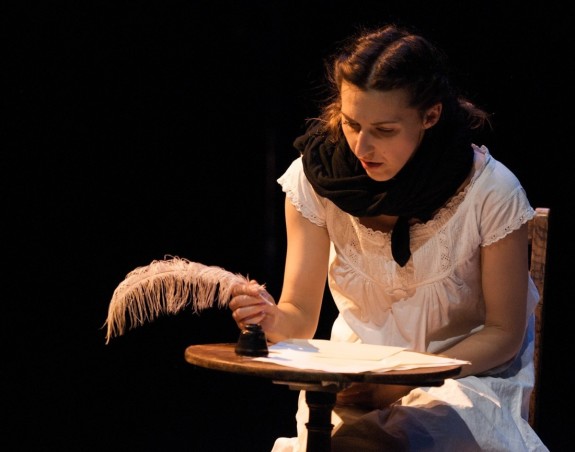 Molly Flood discovers writing as the Daughter in the Canadian Premiere of my play Jane Austen, Action Figure.

December 2003. Los Angeles. I have a newborn daughter. I am recovering from an emergency C-section. The next draft of my play is due for an upcoming production. I was told if I “overdo it,” my C-section scar will re-open and I will require costly home visits from a nurse. I am breast-feeding and can’t be away from my daughter for more than about two hours. On the news, they announce there is a flu virus in Southern California so virulent it can kill a child. My husband is at home with our new daughter. I am in a café, wearing gloves and frequently washing my hands, banging out the next version of my play. I type “for Arlina” (my daughter) on the next draft.

“How do you balance writing and motherhood?”

I’m often asked. I’ve joked, “Whatever it is I do, I don’t recommend it.” I joke because I know that every choice a mother makes is open to harsh scrutiny, as detailed in the powerful new book Lean In by Sheryl Sandberg, Chief Operating Officer of Facebook. I joke because some are seeking a secret formula, and I don’t have one.

Balance. That implies calm; an unshakeable yoga pose. A scale filled equally on both sides
Instead, in the café, I am taking great care. If I re-open my wounds, my ability to mother my daughter will be diminished. If I get the flu, it could kill a newborn. I don’t want to be overly paranoid, but I don’t want to be reckless either. So I am typing in gloves and washing my hands constantly, daring to look like an eccentric hypochondriac. I don’t have anywhere else to go to write. Giving up or quitting is neither the best option for me nor my daughter.

Pregnancy prepared me for the moment in the café. Complicated ethical decisions had to be made, on a regular basis. A doctor suggested I have amniocentesis—a test to determine possible disability in your embryo. Ironically, it carries the risk—not statistically high—of puncturing your baby during the test and giving him/her a disability. It also means you’d have to decide whether or not to abort an embryo with a disability. I didn’t want to have to make this kind of ‘who deserves to live’ decision. I decided to forgo the test and take life as it comes.

I recalled an ethics class in undergraduate school where the types of issues I was now facing as a mother were organized on charts. There was a handy little graph for displaying the ethical positions on euthanasia, for example, from allowing it in all cases to forbidding it. Amniocentesis could be put on a little graph, but it sure didn’t feel like it. Then there were choices around immunization (to do or not), schooling (home or not, impacted by the immunization decision). I remember a big sigh of relief that I didn’t have a boy, because there would also be a decision to circumcise (or not). How could I weigh in? I don’t have a penis. 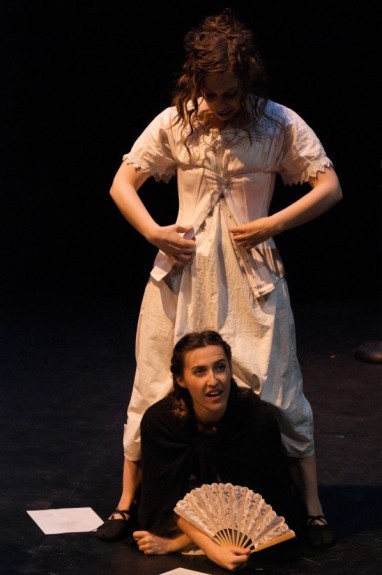 Molly Flood as the Daughter and Melissa Thingelstad as the Mother in the Canadian premiere of my play Jane Austen, Action Figure.

To top all this off, I didn’t want to be overly concerned about any of these decisions. I’ve seen theatre artists parody mothers who are paranoid about safety. I certainly didn’t want to be, heaven forefend, any of the things mothers get verbally tarred and feathered with: “smothering,” “overprotective” or “neglectful.”

Fortunately, growing up female had prepared me for this. As a woman who dated men, I had heard these terms floating around: slut, cock-tease, prude. You didn’t want to be any of those things, right? If you don’t date, or if you love women, the labels are even more vicious. You could apply these lessons to the much-maligned, overly judged institution of motherhood. All of it, loving anyone, is a risk. Don’t let others do the judging.

The Art of Reconciling

Writer-parents often write about how excluded they feel — how their single artist friends jet off to retreats and cocktails and grand openings, while they clean up pee/poo/puke/put pink eye drops in eyes/pick nits out of hair. Writer-parents bemoan the desire to over-blog about, spy on, pirate their children’s lives for literary material. While I have felt these feelings, my predominant experience of writing + motherhood is that my daughter grows into, and along with, my writing. My writing has grown because of her. It started in utero: at productions of my plays, she’d move in response to me laughing, or kick me if I was too nervous and holding my breath. Loosen up, Mom. Laughing is fun.

When my daughter was three, I wrote a play a day for 100 days. An exercise I had mixed feelings about in graduate school became a marvelous way to write while being a mother. The plays could be any length that worked for the day. Arlina got into the game of it, she’d say, “Mama, Mama, what’s your play about today?” I’d ask her what her play for the day was; her plays were about cockroaches, princesses, astronauts, cartoon characters, her favorite toys. Some of our conversations made it into my play Jane Austen, Action Figure (Austen was an Aunt, and also had to balance childcare responsibilities and writing). This play premiered in Canada and Panama City, Panama. I’ve acted out scenes from the productions for her; she joins in. She recorded voice-overs that were used for a workshop of the play at the Women’s Project in New York City. Now that NoPassport Press has published the play, it has become an irreplaceable time capsule of who she was at three.

Now she is nine. I continue to write plays for adults, but I immediately accepted the invitation to contribute to a project for all ages about nonsense produced by Theatre Simple of Seattle last summer. My daughter acted out the play I wrote in her grandparent’s kitchen, read it over and over. With her composer/musician dad, she wrote songs that were used in the production.

Inspired by her, I wrote a play called Made in China, about a child in North America who plays with a toy, and magically connects to the child in China who made it. My daughter read the play with professional actors/a consultant from China at Vancouver’s marvelous intercultural theatre company Pangaea Arts. She staged the entire play in our living room for her Dad’s birthday. She’s memorized it. She won’t let me change a word. She’s thoughtfully considered the issues in the play. She’s written a sequel and a threequel on her thrift store typewriter.

Our situation might be unique, or it might not. Playwriting is a form of writing that asks the writer to take on many points of view. This is why I don’t advise anyone on issues of motherhood—balance is distinct for every child and every parent. It changes at every age.

I do know this: being a writer and a parent can be dementedly difficult and inherently magical, sometimes at the same time. We fall in and out of balance. I am not able to give her experiences more money would bring. I give her the experiences I have and treasure from being in the theatre, and a writer.