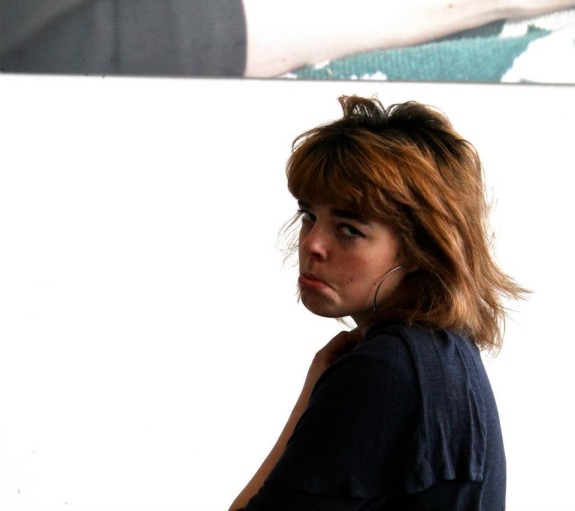 I remember when the Providence Journal began to publish articles online and my father, who has been a classical music journalist for the past 35 years, turned to me in the supermarket and said, “I don’t get it at all. Anybody can just comment on my articles now, and because of that, everybody thinks they’re a fucking critic.”

I have never had any of my work put into print. I have never had experience the feeling of loss that inevitably must come when one’s work goes from something seemingly more tangible to digital, suddenly disposable and floating around in cyber space.

I always liked to write, but I never was properly trained as a journalist. When I moved to Berlin, I didn’t have much of a plan. It was really a sell-your-car-and-hop-a-plane kind of deal. In the beginning I applied to every copywriting and editing position I could find. I probably sent over 15 emails per day for the first two months I was in Berlin. As a native English speaker, who speaks relatively good German, and also a Slovenian citizen I got some responses, but most seemed unsure of what to think. Weeks would go by with no response, and as the sun started to go down at 4pm and funds were quickly running out, I decided to reevaluate my approach.

After living in Albuquerque, New Mexico and feeling mostly trapped for the last four years, I really exploded into Berlin. Everything was wonderful, the lights, the yellow caterpillar trains, the smoking bars, the amazing concerts happening every day of the week, even the trips to the Burgeramt, which is basically the police station where you go to register when you move to Berlin, were a little bit exciting.

Although being excited doesn’t guarantee a job … but following that energy and putting yourself out there can get you significantly closer.

This refreshed feeling made me willing to see anything, try anything, go anywhere and most importantly, and talk to everyone. It can be intimidating when you are trying to paint yourself as a desirable candidate for a position not in your mother tongue, you might use the wrong article and express your interested in something else besides the job.

I started writing here and there for Art Connect, a platform for artists, which is based in Berlin. It gives creative souls of all types the chance to network, find jobs, rent studios and help each other out. In addition, they offer a blog section that focuses on promos, and reviews. And this is where I got my foot in the door.

Since Art Connect is still growing, they were unable to offer any compensation for my posts, but they were more than willing to offer flexibility, accreditation and connections.

Naturally both aspiring and professional journalists struggle with the concept of writing for free.

The question whether or not writers should offer services free of charge has certainly been a hot topic, especially after the heated exchange between Nate Thayer and the Atlantic, after they asked him to adapt a previously written piece without pay.

I think most everyone would agree with the argument that you should be paid for your work, but in some cases writing for free can greatly help your career in the long run, and in my case it was essential.

When you write for free, typically the blog or publication hands over some perks. The first review I wrote was on the Deerhoof show at Festsaal Kreuzberg. The show was awesome, danceable, but I didn’t have a proper camera and the photos came out poorly, so I had to edit them the best I could and post anyway.

Luckily, the folks at Art Connect were very nice about it and also offered to teach me a bit about asking for accreditation, had a good camera bloggers could borrow, and also recommended some people for me to get in touch with.

The first posts were a bit rough … as I had been used to writing academic papers, which I have come to realize, I was never really good at doing.

I had to get in touch rhythm of writing articles, establishing a voice, learning the house style of the blog, and of course learning to be aware of my native language. Re-read, read aloud, ask a friend to look over your work, and remember that writing for free when you are just starting out, allows you to build the foundation for a professional profile.

Bite off more than you can chew

Not long after, I started working for Deskmag here in Berlin. The magazine is dedicated to the coworking movement, which encourages freelancers and self-employed workers of all types to hold on to their independence, but to also simultaneously have a professional workspace.

As they were re-establishing their entire team, they were looking for writers, editors and people willing to dedicate to the publication. Right away I let them know I was available and willing to work hard and that I already had my foot in the door writing for other publications.

Luckily Deskmag is also a paid position, and if it wasn’t I might not be writing this rather enthusiastic article about writing for free.

When trying to become an established writer or artist, you do need to rely on the right place and right time, but it doesn’t mean that it is out of your control. You can take your self to this place. For my first Deskmag article, I went out and visited a variety of coworking spaces in Neukölln, a neighborhood in the southern part of Berlin. Fast changing and a popular place for artists, Neukölln offered endless options. I did some research sent out emails, set up interviews and hit the streets.

My first interview for Deskmag was with Steffi Von Kannemann and Nina Legnehed, a DJ duo who run the Nordic by Nature coworking space. We had a coffee in the kitchen, discussed the space, and after I realized that they were primarily focusing on building their PR agency for Scandinavian music and were DJs themselves, I asked if they needed someone to cover shows for them in the blog.

They happily agreed to hand out some free tickets for a review and began covering all the events I could for the Nordic girls.

Since then I have expanded my network in a significant way. Although I am certainly not rolling in dough and still struggle to make ends meet, I invested in making some business cards and still try to put myself out there as much as I can.

Social events are one of the best parts of working as a journalist. Being present is the best way to pick up writing gigs, meet some incredibly interesting people, who could be a possible story, or give you some of the best advice you can receive.

I always imagined things would be better once I was making a lot of money, but as it stands, working, as a journalist in Berlin has been the most rewarding job I’ve had. That’s not to say I didn’t enjoy slinging cocktails and serving shisha at the Lebanese restaurant in my hometown.

I am still at the beginning, but I suppose that is the most romantic part, so I may as well enjoy the honeymoon in one of the most wonderful cities in the world.