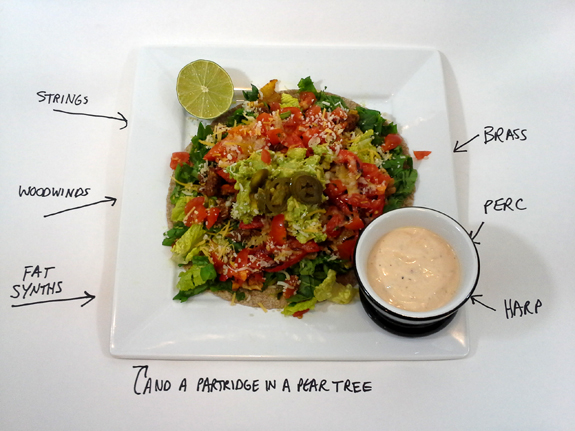 Lately I’ve been working on two small projects at once: music for an iPhone game and an indie movie trailer. I’m starting to take note a bit about what I actually do during my writing process because I’ve been asked how to deal with making not-so-great samples sound better. Well, in short: I layer the crap out of it. I think this might be, like, a theme for me here. Because it was taco night recently at the Cartier-Remington household and as you do, we had several bowls of taco items out like a little serve-yourself buffet.

My main thing when doing this is GO BIG AND PILE ON AS MUCH AS POSSIBLE. This works out okay if you want a taco salad. Nate always has the same comment: “That’s not even a taco! How are you going to even pick that up?!” Actually this is probably a bad metaphor. The point is, you shouldn’t be afraid of layers, especially if your taco is going to end up with one lousy layer of meat on there and THAT’S IT. That won’t win any awards.

So here are my deep pointers on layering sounds.

It’s hard because if you are first starting out and you don’t have a lot of expendable cash for the latest and greatest samples, you are kind of stuck with what you’ve garnered from friends/colleagues, and/or what you have actually purchased. I’m not saying I have the ability to make Casio sounding stuff sound like a live orchestra or anything, but I think layering sounds can help. I have managed to amass a pretty nice sample library over the years, but I still can’t stop with the layering.

If you aren’t doing live strings, layering can be very helpful. In this situation I pull in 3 or 4 different tracks of completely different string samples. I tend to break up my orchestra into its parts, so I’ll have 3 or 4 different tracks of violins, 3 or 4 tracks of violas, cellos, and double basses, etc. This is key, because even if you have great samples like the LA Scoring Strings samples (which I do), they need beefing up, and can still sound out of tune.

Play in each line separately. If you are on a time crunch, you can copy/paste the first line you wrote in one of your violin (or other orchestra section) tracks to the 2–3 other tracks for that instrument in your sequence. I have found it’s a bit more realistic-sounding, though, if you play each in individually. This sort of mimics the not-so-robotic playing of real people. Each line will have tiny differences from the others, and therefore has “human error.” I’ll quantize my notes if it’s something with a really fast tempo and my live playing to the metronome just sucks, but sometimes I’ll just tweak them a little to line up better (because quantizing can sound fake if you do too much of it).

I got a tip a while ago from a guy who owns one of the big music trailer-writing companies in LA. He likes to put a sub-bass sound in each of his cues that follows the double basses in the sequence. I’ve done this before and I just used a sine wave. If you A/B it with and without the sub-bass sample, you can tell the difference: the version with the sub-bass has a bit more depth. I don’t want to keep using the word “beef” here, but it goes with my taco theme… it has more beef. Don’t turn it up too loud though; it will sound, well, basically like you have a sine wave in there.

Because of this, I’ve gotten kind of a signature sound with a lot of music I write. No matter what it is, I try to put in a bunch of electronic sounds. I like the idea of mixing something sort of “techno-y” with “natural” instruments like strings. If I can’t get my violins to cut through the rest of the instruments in the right way, I like to add a sharp cutting saw patch to double them with (along with aforementioned multiple lines of various violin string samples). That definitely helps it come through more. And depending on how loud you turn up this saw sample, it will sound more electronic, or just have a more subtle string “pop.”

I do this for drums, too.

In the movie trailer I’m working on, they temped with “Aggressive Expansion” from The Dark Knight (a very cool cue). I know it’s hard to emulate such an awesome composer. I listened to this track, like, 20 times to get an idea of the kind of sounds the director wanted, and could only speculate on what kind of drums he used. So I wrote in what I thought he used, and then put my own spin on it using tons of layers. For the drums in my trailer, I used a huge “death snare,” a gran casa, timpani hits, huge big ethnic drums (this is a menu of various nondescript big “boomy” drums that I used), and taikos. With all this, I managed to get quite a beefy aggressive sound that is original.

Writing drums of any kind is really hard for me. So I do try to listen to the temp tracks that directors give me and pick apart certain sounds to see if I can rebuild them. In particular, I feel that hip hop drums are the hardest. Whenever doing anything like this, or even clubby electronic music, I use TONS of layers. I have to be honest, I don’t know if other people do this when writing this style or if it’s just me, but it helps.

In the past couple of electronic and hip hop cues I did, I layered about 5 different kinds of kicks. And that’s only the kick drums. I usually do several snares as well, to get that kind of short snappy sound that I want. It’s not always exact. Sometimes I’ll blend in something really random with the snares, like weird sound effects, so they come out sounding really cool. When all the snare samples are played together along with these sound effects, it makes a really interesting sound!

Don’t be afraid to experiment! Make your taco salad your own! Try adding different things on top of your one layer of horns or piano. Sometimes layering sounds really helps, and makes your music stand out that much more for being different.