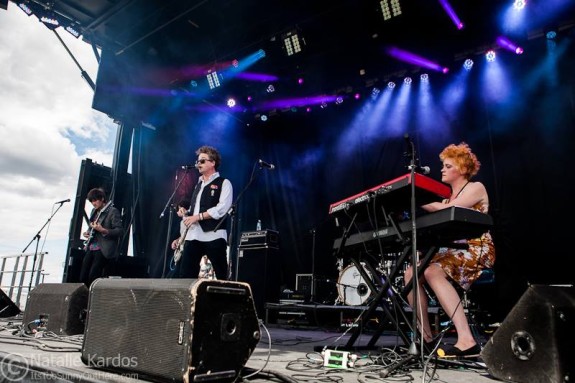 Shenandoah Davis playing the keyboard along with Sean Nelson and his backing band at the music festival Sasquatch.

As artists (and especially musicians), we often find ourselves in the difficult position of having to assign a dollar amount to the works we commission from other people, whether it’s instrumental parts for a new song, a poster design, or help with the creepier-crawlier parts of doing music (i.e. social media).

We also wind up in the position of having to ascribe a certain amount of money to the works we put out into the world, be it a “pay-what-you-will” button on Bandcamp or agreeing to play a free show every once in a while.

Having musicians to collaborate with is not your God-given right.

Amanda Palmer, whose music is obviously not as important at this point as her wildly-successful crowd-funding efforts, gave a very well thought-out TED talk entitled “The Art Of Asking” in which she laid out why she was able to raise a million dollars on Kickstarter (because she asked for it and fans gain pleasure and appreciation from giving the objects of their fandom whatever they request).

I admire Amanda Palmer, both as a musician and as a post-label post-music-industry super-genius. She has spent years into cultivating her fan base (which happens to be the most violently loyal fan base that has been around since Ayn Rand published Atlas Shrugged).

A lot of indie musicians who lack her particular brand of charisma, record-label experience, and infrastructure seem to be taking her message a little too close to heart.

This is why I (hopefully) gently remind my struggling artist friends in their moments of frustration or of self-grandeur that NO ONE OWES YOU ANYTHING.

I know that this is sort of “orphanage talk,” and can easily sink into an abyss of surface-seeming similar statements, such as “I bet the children in Africa would have loved to eat the rest of your french toast,” or “at least your have a roof over your head.”

They were objects of intense investment. Hours of instruction with the best musicians and composers around were funded by their wealthy parents from a very young age.

High achievement for a composer was gainful employment from a church and the opportunity to compose pieces of music played between liturgies.

Then came the symphony, during which other rich people could buy very expensive tickets to see the music you had originally written for churches performed live by an orchestra.

Then along came the Romantic period, and John Gay’s “Beggar’s Opera,” which was at the time the only orchestrated live performance that was accessible to the non-church-going public.

Shortly thereafter came the mass manufacturing of spinet pianos. With the addition of spinet pianos into many homes came a wave of what we now call sheet music: songs that were written specifically for students to play and perform in a dinner party environment.

Middle-class families were able to purchase pianos and their children were able to learn how to play them. It was here, in my very humble opinion, that the art of music began to die.

I could continue on this timeline, but as far as my argument here is concerned (as well as the beginning of my personal experience), we fast forward roughly a hundred years or so, past the electric microphone (1925), the tape recorder (1935), stereo sound and multi-track recording (1953), the audiocassette tape (1963), and digital recording (1980), to a platform called MySpace and a computer company called Apple and a program called GarageBand that was included in the purchase of every Apple product.

These things, in conjunction, made it possible for anyone anywhere in the world to record, mix and publish a song to an often-low but seemingly-unlimited audience.

There were no auditions, there were no filters, there was no pay-what-you-can button. You could record anything and that someone would somehow find it and that if enough someones found it, one of them would enjoy it and tell their friends.

The post-Napster, post-record label music business is in complete shambles. Most amateur musicians are operating as if any single person anywhere in the world hearing your music is some kind of magical thing that happens for no reason.

Hundreds of public relations companies, scam websites, web start-ups, streaming radio stations and low-budget festivals fill every musician’s inbox with the promise of “exposure” rather than payment without having any kind of proven audience.

While songwriters and bandleaders have gotten used to signing up for the types of services listed above, and gotten used to participating in things where exposure is often exchanged for a set amount of pay, they have also gotten used to expecting the musicians who collaborate with them to brace themselves for the same expectation.

I’ve heard people go so far as to say things like, “This poster designer/guitar player/promoter is lucky to be working with me at all because of the great experience they’re going to have and the exposure they’re going to get.”

Statements like that (unless you are in the indie big leagues, on an Amanda Palmer-level) are flat-out incorrect. If you’re the one creating the songs and the ideas behind the songs, your options are either to trade away ownership in songwriting credit or to pay people outright for commissioning parts they write themselves for your songs.

Having musicians to collaborate with is not your God-given right (sorry, more orphanage talk) and, if anything, you should feel lucky that out of the kajillion-million songwriters in the world (a simple mathematical equation based on the number of people who own computers and who have ever listened to a song, because those are the only prerequisites for calling oneself a musician anymore), anyone wants to listen to one of your songs, much less devote hours of their life to either learning parts or composing their own parts for your songs.

As an artist, you need to be constantly telling yourself that you have some kind of unique superpower and something special to bring to the world of music listeners that no one else can legitimately bring, and I respect that.

The age of musicians filling a cultural or societal need is behind us.

Have enough self-respect to turn down gigs and opportunities for exposure unless the exposure is truly massive, and have enough respect and gratitude for the other artists you employ to pay them. If you can’t pay them or they’ve agreed to do work for free (hint to artists: try not to do this much), at least respect them and appreciate them enough to realize that they’re doing you a huge favor, not the other way around.

Amanda Palmer got a huge amount of negative buzz in the media because shortly after she raised a million dollars on Kickstarter, she put out an open call for city-specific volunteer horn players, simply stating that anyone who would like to play with her would be compensated in beer, merch, and playing.

While social media was in a complete uproar about this and caused such a fuss that Palmer ended up paying all ‘volunteer’ musicians as well as disclosing where every dollar of the million plus Kickstarter dollars went, the fact remains that she was able to solicit a volunteer army in every city who were so excited to be on-stage with her that getting paid wasn’t a priority.

While her business practices since splitting from the record label machine have worked out very well for her, that does not by any means give any other independent artist just cause to exploit musicians, fans, artists, or anyone else for the sake of exposure.

Sometimes a musician will come along who believes in you and your art, and who is willing to put in the hours without being compensated. You should love that musician. Appreciate them, praise them, and do what you can to further their other pursuits.

In summation: Ask for what you feel you deserve, pay the artists working with you what you can when you can, be grateful for making any semblance of a living from art. Don’t ever let anyone who supports you feel under-appreciated. There are an infinite number of musicians who exist to most people only through Facebook pages and Pandora and Spotify and the countless other online agents for discovering new bands.

Above all, you don’t automatically deserve to have fans (even if you happen to randomly have some). Earn them, and keep them. Maybe someday they’ll be marching behind you in your very own volunteer orchestra.