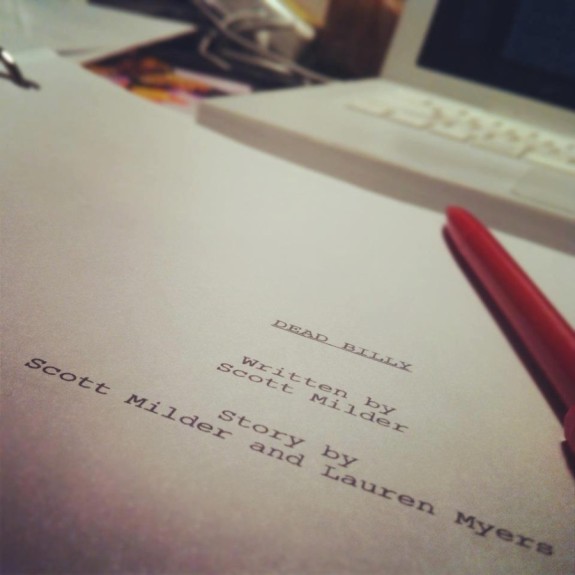 Teachers in screenwriting classes often tell students that you only have the first 10 pages of your script to hook a reader. As someone who worked as a reader for a major Hollywood studio where on a good day I had to read five scripts and on a bad day I had to read 15 to 20, I think that’s way too generous.

You have a page.

The thing we all need to understand is that there are only an average of about 50 spec screenplays sold every year.

Now let’s use a conservative estimate that most production companies and studios will see something like 10,000 scripts come across their desks in any given year.

If you figure that most, but not all, of these scripts are being seen by multiple companies (the practice of “going wide”), you might be able to guess that — again, conservatively — there are more than 20,000 specs floating around Hollywood every year.

I’ve seen estimates of more than 50,000, but I don’t want to depress you all too much right off the bat. So let’s just go with the lower number.

Basic math means that your odds of being one of those 50 are about .0025 percent. And that’s if your script is one of the 20,000 that has actually made it out of your mom’s basement and into circulation.

That’s a lot of scripts, and not a lot of room for new writers. What this means is that the job of any Hollywood script reader, development executive, producer, agent, etc., is to find a reason to say no to your script.

Your job as a screenwriter is to not give them one.

So here is my incomplete list of five mistakes you can make on the page that will hobble you right out of the gate:

Read these two sentences and ask yourself if you would want to keep reading:

“POV pistol as we DOLLY across the coffee table, then CRANE UP to REVEAL a MAN….”

“A MAN is sitting at the table. He is holding a pistol and pointing it at the
CAMERA.”

“A MAN sits slouched on the other side of the coffee table, pistol clutched in a
white-knuckled grip.”

It ain’t Shakespeare, but I’d say it’s an improvement. Don’t kid yourself that your writing style itself doesn’t matter. It’s true the screenplays aren’t literature in and of themselves. But you need to approach them that way. I run into this with students all the time; somehow, they’ve developed the crazy notion that the STORY they have in their head is just so good that they don’t need to actually communicate it on the page. We’ll just get it.

Write the damn thing as if it were your great American novel. Craft every sentence for maximum impact. And, for the love of God, do NOT tell us what the camera is doing. Here’s a good rule of thumb to go by: Verbs are your friend. Use them to describe.
Compare:

“The hill is tall and is silhouetted against the night sky.”

“A tall hill pushes out of the horizon and stabs at the night sky.”

The passive voice is your enemy (this sentence notwithstanding). Do a find/replace for the words “is” and “are.” These words are weeds and must be pulled out by the root.

Now don’t go the other way here. You’re not William Faulkner, and neither are you being paid by the word. We don’t need your beautiful, lovingly rendered four-paragraph description of a flower vase. Get to the fucking point. Again, I go back to the verb thing. Every sentence should be an action. If there’s a flower vase in your scene, it needs to be doing something (sitting, leaking, falling and shattering on the floor, whatever) and the thing that it’s doing needs to further the narrative.

Another rule of thumb: Verbs may be your friend, but adjectives and adverbs are like your friends who show up for a weekend, eat all your food and never leave. Cut them loose.
Compare:

How, exactly, would a man shout softly?

This one is my Achilles heel. When most of us come up with our scripts, we usually have a pretty clear idea of the beginning up through the end of the first act, and maybe the climax. Unfortunately, the meat of the movie is going to be in the second act, and that’s usually the last thing we think about. But this is where most of the story happens.

My problem is I hate outlining. I come up with an idea and I just want to dive right in. The consequence is that I have about three times as many aborted screenplay attempts sitting on my hard drive as I do completed scripts. I usually make it to about page 50 and realize I have no fucking clue where I’m going.

This is a problem.

There are two major plot points that happen in your second act. The midpoint is the point-of-no-return for your character(s). Something happens that means he/she/they can’t back out now (think of the tractor beam in Star Wars). The crisis point comes toward the end of the second act. This is the lowest possible point for the character, the moment where everything seems to have gone wrong (think of Obi-Wan’s death). The crisis point leads to the reversal recognition, the “Aha!” moment where, under extreme pressure, your character sees a possible way out. I call it the “Hail Mary pass,” inspired by a famous moment in football history. The reversal recognition is the hinge to your third act, and it’s going to be the bridge to your climax.

I still hate outlining and resist it at all costs. But I’ve learned that if I slow down and at least figure out my midpoint, my crisis point, and my reversal recognition, I can usually keep my story focused. Knowing these things will preserve the narrative momentum and will keep you from getting lost in the weeds at around page 50, like I usually do.

I can’t tell you how frustrating it is as a screenwriting instructor to watch some of my students resist learning the ins and outs of proper screenplay format. It’s hard and boring and they just can’t be bothered. Like the style issues, they don’t want to think it matters.

I’m not going to go into it all here. But learn it. Read scripts and look at what they’re doing. There are also books out there — particularly Christopher Riley’s “The Hollywood Standard” — that will help. Also, get the software. Final Draft and Movie Magic: Screenwriter are the most common, but there’s also Adobe Story and, if you don’t want to spend the money, freeware programs like Celtx.

Whatever. Get something. It’ll make your life 100% easier. Knowing proper format is important for obvious production reasons. But, perhaps even more crucial, it shows that you know what you’re doing. If a reader sees a script that’s all in the wrong font with improper scene headings, center-justified dialogue and muddled transitions, they’re going to know that you’re an amateur. And you’ve just given them their reason to say no to you.

Dialogue Only a Mother Could Love

Dialogue is perhaps the hardest part of writing a screenplay, because it’s the most subjective. Bad dialogue is sort of like Supreme Court Justice Potter Stewart’s famous definition of obscenity: “I know it when I see it.” Unlike format, style, and story structure issues, there’s no single right or wrong way to write dialogue. You can take the Tarantino approach, the Nora Ephron approach, or the David Lynch approach. You can have long, epic speeches or you can do like WALL-E and have almost no dialogue at all. Doesn’t matter. Whatever’s appropriate for your story.

But when it doesn’t work, it sucks.

Most of us who can write dialogue are like musicians who can play by ear. It’s just something you’ve got a knack for. But if you don’t have that natural ear, here are a few things you can think about to get better:

Learn to listen. Watch movies and really listen to how the characters talk to each other. Even more important, listen to people. Learn to eavesdrop. Notice the rhythms, poetry, and nuance of everyday human speech. Learn to listen to your characters. Get a sense of their unique voices. And make sure they’re talking to each other, not the audience. Avoid exposition. Don’t use your characters as mouthpieces to explain things. What’s not said is often more important than what is said.

Read your dialogue aloud. If it sounds weird to your ear, it probably is.

I don’t have any magic answer on how to guarantee that your script will sell (and if I did, I probably wouldn’t tell you). But I can tell you that if you master the five things listed above, you’re at least moving in the right direction. That’s the best any of us can hope for.