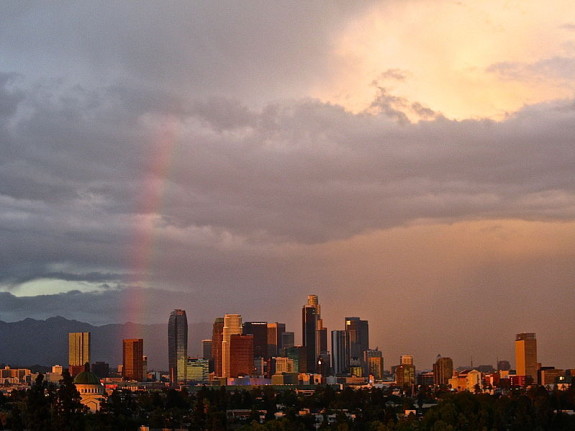 Your job is to chill the fuck out.

The meeting might be on one of the big studio lots.

You’ll look up as you pull up to the gate and see the famous Warner Bros. water tower looming overhead, or a big sign saying “20th Century Fox” or “Universal Studios” right next to a bunch of massive sound stages.

Some guard will take your ID and call ahead to say, “Mr. Milder is here for so-and-so…” and give you a pass with your name on it, and you’ll feel really important.

Or it might be at some anonymous office park out in the Valley somewhere, sandwiched between a Walgreen’s and a Yum Yum Donuts. You’ll look at the sad little palm tree in the concrete island next to the front door and think: Really?

If you’re at one of the studios, the lobby might look like something out of a Stanley Kubrick movie — all hard angles, gleaming white surfaces, and huge glass tables. They’ll have feng-shui’d the shit out of that place.

If it’s the office park for you, it will probably look like a dentist’s waiting room.

No matter. After you get out of the elevator, the ritual is always the same.

The first person you’ll meet is the receptionist. His name will be Brad or Darren, or her name will be Teagan or Brit.

If it’s a he, he’ll be skinny and nerd-hot with frosted tips and hipster glasses. If it’s a she, she’ll look like that really pretty girl who grew up down the block and played soccer and who you never had the nerve to talk to in high school.

S/he will smile at you and, if S/he is good at the job, they will already know your name.

“Hi. Go ahead and have a seat. So-and-so is just wrapping up a conference call.”

So-and-so is always wrapping up a conference call. You’re 10 minutes early, and so-and-so is inevitably running 10 minutes behind.

Brad or Teagan will then offer you a coffee or a bottle of water. You have two choices. You can say no, at which point a look of panic will flicker into Brad or Teagan’s eyes. They won’t say anything and the smile won’t falter, but the look will be there.

Or you can choose the path of least resistance and say yes.

Brad/Teagan will point to the stylishly uncomfortable leather couches around the massive glass table and scurry off to get you your drink.

You’ll sit and notice the movie posters hanging on the walls. “Iron Man” or “Prometheus” or “Transformers,” or whatever it was that earned this company a billion dollars last summer.

Because here you are.

Congratulations! You’re now in the top 0.5 percent of aspiring screenwriters. Someone somewhere read something you wrote, and they liked it — not well enough to buy, but well enough to invite you over to chat. You’ve made it to your first general meeting with a Hollywood script.

This will feel like a big deal. And it is.

But not as big as you think.

There will be a stack of Hollywood Reporters on the glass table. You can flip through one if you want, but what you really want to be doing is looking at your iPhone — because when so-and-so finally emerges you want to look busy, like you’ve got two or three other meetings that morning and you hope you can wrap this one up quick because you don’t want to be late.

If you’re still rocking a flip phone, just stick to the magazines. Because a flip phone is the mark of shame and sadness.

Eventually, so-and-so will appear, all full of frazzled smiles and hurried apologies, and he/she will usher you back to his/her office or cubicle. Or, if they want to really impress you, maybe a conference room.

The first thing you’ll notice is how young and attractive so-and-so is. You will harbor a ten-second sexual fantasy about this person, and then you’ll remember that he/she is way out of your league, and you will move on.

His/her title will probably be Creative Executive, which sounds really impressive but is in truth just one step or so above assistant. But he/she will really seem like he/she has his/her shit together.

I have two personal rules for general meetings:

That’s my rule. But if you have a good strong bladder, then knock yourself out.

Hopefully you didn’t make the mistake of wearing a suit. For one thing, LA is hot as hell, even in the winter, so you probably melted into a bag of walking sweat during the short jaunt across the parking lot. Now what you’re doing is sitting here in this stuffy office or cubicle next to young and attractive so-and-so worrying about your B.O.

For another thing, NOBODY wears a suit in LA except for agents and lawyers, and maybe studio bosses. (I saw Jim Gianopulos, the Chairman of Fox Studios, once. That dude knows how to wear a suit.)

The writer’s uniform for men is a decent pair of jeans and sneakers, with a checked button-up or plain T-shirt. For women it’s a nice pair of slacks and a pretty blouse.

You don’t want to look like a hobo, but you want to look (and feel) relaxed. A suit tells them that you’re trying too hard, and they’ll take you less seriously.

A general meeting is sort of like a job interview, except there’s not really a job at the end of it. There’s usually about ten minutes of getting-to-know-you small talk. So-and-so will tell you a little bit about him/herself.

If so-and-so is a dude and one of those douchey types who thinks he has to play the LA part, he might tell you about the chick he banged last night. That doesn’t happen often, but it’s not unheard of. It’s tacky, but ultimately harmless. Just smile and nod and be comfortable in the knowledge that said chick probably doesn’t exist.

If you’re a woman, you probably won’t get that. You might be tossed some light flirting. I’ll leave it up to you on how you want to deal with it.

What so-and-so really wants is to get a sense of who you are. He/she has already read something you wrote, and he/she liked it enough to give you some time. Now, what he/she wants to know is if you’re cool — if you’re someone he/she could deal with for six months or a year.

Your job is to chill the fuck out. Don’t get nervous.

Here’s the secret they don’t tell you going into these things: No single meeting is going to be the magic bullet that launches career. Most likely, it won’t go anywhere at all. What you want is for this so-and-so to like you and, in the unlikely event that six months or a year from now a writing assignment opens up, to remember you.

You’re building a network. It’s a long process, and it can be discouraging at times.

Just remember: You deserve to be here. They read you and reacted favorably to your work. The hard part is done.

When it comes right down to it, LA is just a big small town. All these creative execs, assistants, junior agents and managers all seem to know each other. They date each other, go to each other’s parties, take road trips together, and meet each other for drinks after work.

And they all talk to each other. One CE might not have anything for you right now, but if you have a good meeting he/she might tell his/her roommate — who is also a CE or an assistant somewhere — about you. And maybe that CE will also like your script. And just maybe he/she will pass it on up to his/her boss.

And then you might get called in to another one of these meetings, except the person sitting across from you this time is a little older and the nameplate on his/her desk says “Vice President of Production.”

And if that meeting goes well, then maybe something will actually happen.

It takes a lot of these meetings to get to that place, and even then you’ve only inched the ball. The Vice President of Production will still probably not hire you, at least not right away.

But as long as you’re moving forward and not backward, you’re good.

You want to think that you’ll get hired based solely on the quality of your work. Truth is, that’s only a pretty small part of it. You need tenacity, and patience, and a thick skin. And you need to be able to sell yourself. Writers are by nature awkward misanthropes. Put a lid on that shit and save it for the car ride home.

So-and-so will say nice things about whatever he/she read, and then he/she might say something like, “so what’re you working on now?” That’s your cue to pitch your other scripts (side note: you better have other scripts. Part of what they want to know is if you’re a one-trick pony).

That may not come up at all. If it doesn’t, don’t worry about it. Let them ask you. Don’t force a pitch. Like the suit, it smacks of desperation.

Selling yourself in this context means just being cool. Be friendly, funny, and engaging. I like to tell crazy New Mexico stories if I get a chance. That always seems to go over well. Whatever. Find your hook, the thing that works for you.

Don’t beg for a job, but if they start pitching you a project (it doesn’t happen often, but it does happen), don’t be afraid to jump in with “wow, that sounds awesome! I’d love to take a crack at it.”

Maybe even toss and idea or two at them. That shows that you can think on your feet. They probably won’t take the bait, but they might. They pitched it to you for a reason.

After twenty minutes or so, you’re done. They’ll thank you for time, and then Brad/Teagan will validate your parking, and fifteen minutes later you’ll be at the Taco Bell down the street shoveling a gordito into your face and kicking yourself for not telling that anecdote. Allow yourself the amount of time it takes to finish the gordito to indulge in a little self-flagellation. You’re a writer, so it’s in your blood. But then move on.

It’s always a good idea to send so-and-so a breezy little thank you email afterwards. This serves three purposes: It reminds him/her who you are (they do a LOT of these meetings), it’s polite, and it adds him/her to your Rolodex.

And if you never hear from so-and-so again, don’t freak out. You didn’t fuck up. It’s a numbers game. Just move on to the next so-and-so. Trust me, the meetings get less weird over time.

And always take the bottle of water.