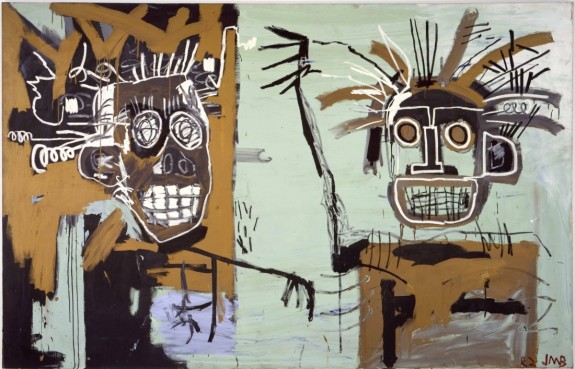 It felt like I floated right up out of the darkness of the subway passage onto 34th Street in Chelsea. It was a lightly crisp, cool spring day, with a sprawling and vibrant blue sky above. High with elation, I grabbed a hot, sweet, decadent coffee and walked the remaining blocks of my journey alone. But I didn’t feel alone. A powerful exhilaration accompanied me, and I barely felt my feet moving me.

I can only equate this feeling of anticipation to when you are a kid, waiting for your birthday, or a wished-for special treat. I had taken a personal pilgrimage from Miami to New York on a mission to see 58 Jean-Michel Basquiat works in one large gallery exhibit, before the show was taken down. As I traveled I thought, “I am getting closer, each step is taking me closer to seeing B!”

I began researching Basquiat in 2004, as a grad student.

I’ve read all the major works about Neo-Expressionist American artist (1960-1988); watched the films; looked for every date, line, letter, symbol, paint stroke, footprint in the paintings; listened to his music; studied his references, his bio; I’ve even met some of his friends. Though I have delved into his work and life for years, I hadn’t yet seen a single painting in person.

Why do I care so much? B sort of lives inside me. He’s like an everlasting well of inspiration, motivation and education for me as an artist. And I’m not alone. His influence in the art world and persona seem to grow by the day. So do the many millions of dollars that collectors lavish, maybe foolishly, for his work.

This exhibition that I was headed to drew record-setting crowds for a gallery show, with numbers only rivaled by museums. On opening day, thousands greeted the paintings that played on the walls like rock stars among the celebrities who peopled the night. For months afterward, on a typical day more than 3,000 visitors passed through.

I was among those waiting outside in a long, thick line on closing day, to say goodbye to the works.

These valuable and coveted pieces, many of them enormous in size, are owned by collectors, and were on loan for the public exhibition. They weren’t for sale, though I’ll bet offers got onto the table. I feel fortunate to have seen them. How has Basquiat become much more famous now than when he was alive? Why is his work such powerful creative fuel for me, and so many others?

We all have heroes.

They are small and large, everywhere in life, and anyone can be one. Heroes break boundaries, carve statements, blaze paths, leave legacies and memories. They inspire. Humans honor and often attend to those who make us feel. What especially magnetizes me to them is that every hero, upon inspection, has faults like the rest of us. B included.

I finally arrived at Gagosian Gallery that Friday morning. I paused a moment, tossed out my empty coffee cup, and observed. People milled around in the sun outside. Groups of teachers and children in uniforms filed in and out of the fittingly tall doors. Singles, couples, families and friends of all ages, colors, and origins chatted animatedly as they came and went. Among the flow were lots of “cool-looking” young, 20-ish people. I took a deep breath and went in.

High ceilings and walls framed the scene, which was full of the color and buzz of humanity and art. Another deep breath. The large paintings leaped off the walls at me from around the huge room with defiance, furor, hilarity, madness, sadness, sweetness, oddness, mundane-ness, sometimes disconnected-ness. These paintings are the makings of raw emotion and regular life. Seeing the work in person brought every hair on end, repeatedly.

I stayed for a long time, and looked at everything carefully, taking notes and listening to the guards bark at people for trying to take pictures. The experience created a resonance so strong within me that after a time, I had to leave. The creative messenger in my brain was bouncing around, off the wall with ideas, questions, and feelings. Seeing the exhibit set off many thoughts, which I attempted to capture in my sketchbook.

Artists should take this kind of energy and re-channel it.

When looking for inspiration, ride its current. Seek out real art that speaks to you and experience it wholly. This is not to suggest imitation. Rather, recontextualization, reinterpretation. These kinds of experiences are just the necessary fuel for the unique artistic temperament, especially when one hits a burnout phase, which we all have from time to time.

Two days later I was home, straight back to the marginal grind. I was exhausted, and absolutely rejuvenated in every way. The next day in class, my students said the story of my trip was inspiring. How many struggling artists will fly across the continent to see an art show? I don’t know. But for a parent on a lean budget, my trip was a self-indulgent solo ride.

Not a moment or dollar was wasted, though. The journey was meant for someone whose love and commitment to art is pretty intense. That would be me, “the intense artist.” And so, most definitely, my master of intensity, Mr. Basquiat—he’s lifted me up on a quite a wave. I just keep on riding it. And riding it.