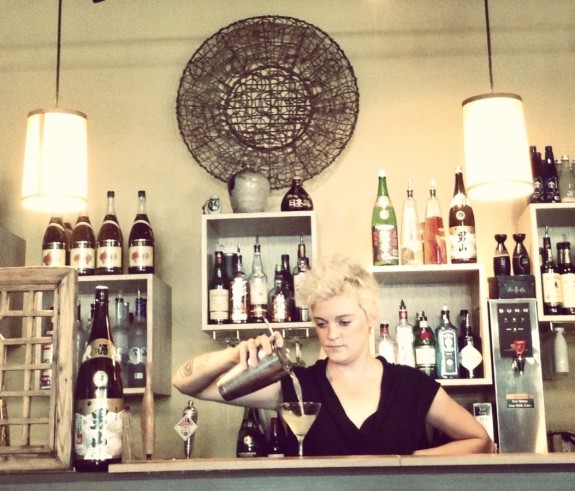 When I was 24 years old, I had been playing shows for about two years.

I had just started making a little bit of money from the Internet, and had finally written a song I thought might actually be pretty good. It was then that I decided to quit my coffee shop job and “concentrate on my art.”

I spent the next three years constantly and consistently almost broke, taking on piano students for a month or two only to abandon them for a tour, babysitting here and there, and applying for research studies on Craigslist. I auditioned at a piano bar. I lied my way into an occasional serving job at a Latin restaurant that paid me under the table, and then weaseled my way into picking up shifts at the hand-made women’s fashion store next door (both have since gone out of business).

While my initial impulse was to stop working, to concentrate on my creative pursuits, my complete lack of money and stability was always at the forefront of my mind. I started going on longer tours, putting together spreadsheets of gas estimates, trying to figure out exactly how much money I’d have left after paying my measly $300 rent in a house with six people. I started picturing dollar signs above audience members’ heads, trying to add up how much I could count on each one for, when the inevitable house show tip jar got passed around.

I play keyboards in my husband’s band, we just played a record-release show. I manage another band who is releasing a record this fall and together we’ve been learning about the weird and wonderful world of LLCs, releases, PR firms, credit unions, and how to get along.

I started the slow and laborious process of recording my third record a couple of weeks ago. I’m helping a friend develop a website that provides bands with a-la-carte managerial and booking services and advice. I’m midway through booking a six-week tour for myself and an artist from New Zealand, and beginning to plan a six-week tour to Australia and New Zealand in the spring. And between a sushi restaurant and a café, I worked 75 hours last week.

I’m not trying to brag. It was a miserable week that I created for myself, for no other reason than to cope with stress. Here’s the thing: my rent is still pretty cheap; I’m closer to making a sustainable living off of music than I ever have been before; and I have a really cute dog at my house who is pretty morose when I’m not around. But one thing that I’ve learned about myself is this:

If I wake up in the morning with nothing to do that day, I will not do anything.

I will watch MasterChef on my iPad until the battery dies, and I will probably decide that the effort of getting out of bed and plugging it in is a little more than I’m capable of handling at the moment. But if I have a few important e-mails to send, or need to write the bridge of a song or re-record some backing vocals or get a contract signed and I’m working at a coffee shop from 6 a.m. to 2 p.m. and at a sushi restaurant from 4 p.m. to 10 p.m. and I’m doing that four days in a row, you’d better believe I get everything on my to-do list done between 2:30 and 3:30, or between 10:30 and midnight, because I have to.

While part of being an artist is evaluating your own work and planning your next project, the hardest part for plenty of artists, myself included, is actually making something.

As an artist, I have grown to realize that I completely hate making things. I performed in a show called NEW this spring with a poet, a dancer, and a performance artist. The premise of the show was that each performer had to create 20 minutes of new material to present six weeks later at the show. In those six weeks, I did compose 20 minutes of new songs, but I also planted an indoor herb garden, booked a month-long tour, began working for a music production company, and started thinking about what I would name my inevitable offspring; I helped friends move and cooked a lot, essentially always searching for something to do, other than write songs.

These days, I don’t have to search at all.

I spend my mornings making these 700-calorie drinks called Milky Ways (chocolate and caramel syrup) and my evenings waiting tables at a sushi spot, trying not to spend all of my tips on food during my breaks. And a couple of nights a week while I’m walking home from my jobs, a little musical idea will appear in my head and I’ll spend a couple of hours at home tinkering with it, before eventually moving the fleshed-out recording of that idea onto my phone and listen to it while I walk to work the next day.

When I started working again, in the traditional money-making sense of the word, I was almost embarrassed about having a job, and actually went out of my way to find a restaurant slightly out of my music community’s price range. When I did accidentally stumble over someone I knew while I was working, their reaction was always somewhat incredulous (“You’re a waitress now?”) and my response a bit sheepish and dishonest (“Oh yeah, I just work here occasionally”).

Because I was coming off of almost two years of constant touring and immediately began working full-time, I felt that my grand touring endeavor, of really trying to make music my life pursuit and my sole source of income, had failed somehow, and that being employed was evidence of that failure. I furthermore felt judged by my friends who were succeeding without day jobs. But now that I’m wrapping up a year of gainful employment, I realize that my touring was not unsuccessful—it was just not something that made me wealthy.

So, about that gainful employment…

I was glad to have the experience of working an “honest job,” and beyond grateful to Thoa, the restaurant-owner who has been kind enough to keep me around between adventures this year (and coincidentally, a visual artist herself). While I prepare to spend five of the next six months out on the road again, I’m glad that I gave myself the opportunity to miss my art a little bit, and the added confidence of a less-empty bank account to stretch out my travels, eat slightly better food, and live without the constant fear of running out of money, for at least a few months.

(Author’s Note: Due to my high volume of employment, it took about two weeks to finish this article. At the time of publishing, I will be working a much healthier 15 hours/week.)