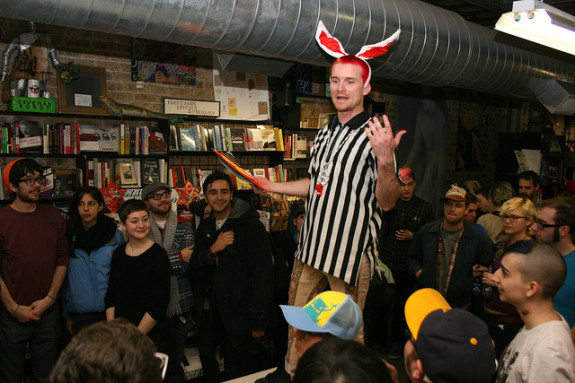 The good people here at Pyragraph asked me if I would write something for this month’s current theme: side jobs. I agreed, of course, being careful not to let it slip that writing for them is my side job. (Shhh… don’t tell.)

Everyone always wants to know how to find side jobs while trying to “make it” as a writer. If you ever bump into someone famous, like David Sedaris or Steven King, be sure to ask. As for me, I don’t consider myself famous, nor would I say that I’ve “made it” as a writer. But it’s all relative, I suppose.

I remember the first time I was ever paid to write.

I was living in Chicago and had become friends with a great guy, named Jay Blumenfeld. Jay is owner of Smart Alex, a fabulously hilarious greeting card company. Jay had read several of my zines and short stories, and liked my style. He asked if I could come by his office once or twice a week and help him with some of his social networking.

Over the next few months I helped him set up a Facebook account, as well as formulate an extensive email list. I then began to write regular posts and emails, getting customers and clients excited about new cards. In many ways it seemed like an easy job for me.

Occasionally I would help with the text of the greeting cards themselves, but for the most part I was sending out mass emails and updating Facebook. The reason Jay kept asking me back was that what I wrote in an hour might have taken him much longer. He was willing to pay me for my quirky sense of humor and my way with words. He would tell me what needed to be said, but I would figure out how to say it.

Of course, the whole time I worked for Jay I also worked 40 hours at a regular job. So which one was the “side job”?

I’ve worked for department stores, casinos, coffee shops; I’ve hauled scrap metal, sold stuff on Craigslist and trimmed trees. I’ve done whatever I could to make sure my rent got paid. In addition to that, I’ve sold zines, written for newspapers, and helped edit books. I’d guess about 10% of my annual income is derived from writing-based ventures. I can’t tell you which jobs are the side jobs. But I can tell you this: I am more satisfied with that 10% that comes from writing than all the rest put together.

I suppose the goal is for writing to cover 90% or 100% of my income. If I ever get there, I’ll let you know. In the meantime I’ll just keep plucking along, and be damned proud of it.