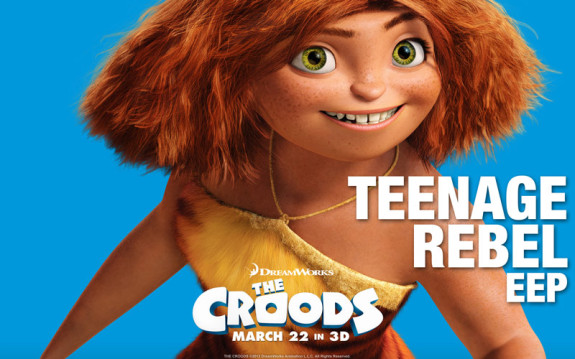 I’m a disproportionate fan of bad art. Give me your mediocre outings; your Lady in the Waters, your Hot Tub Time-Machines, your Time-Traveler’s Wives. I will receive them, and I will make better use of them. I am a bad art grist mill. I am where bad art comes to be reborn.

The problem with good art

is that it tends to intimidate me. It helps me consider entirely new approaches, which take time to develop, and often result in a change of style. I go to an Edward Weston exhibit at an MFA; a Kathy Beekman opening on Canyon Road; a Basquiat show in NYC, and I walk away broken, recreated, questioning my foundations.

Bad art, on the other hand, makes me want to fix it.

As a writer of an elliptical, deeply moralistic novel, I have a need for inspiration on a rolling basis.

And lucky me, I just suffered a movie so unheavenly-bad I considered demanding the return of my $2.50. Leaving aside most of its problems, The Croods committed possibly the gravest—the most inspiring—of all bad art crimes.

It took a fascinating premise, and peed right in its eye.

Presumably the only human family left on earth, the Croods have survived by hiding at all signs of danger. Unknown to them, tectonic shifts are going to rip their continent apart (in a few days*), right under their feet. The status quo they’ve worshiped will kill them.

There was so much more the writers could have done with that “world ending” conceit, which would have been perfectly suited to a kids’ movie.

I think it’s revealing that this movie was imagined now, as our world is in danger of ending around us, in a few years.* And I like that the conflict is conceptual; between two modes of living. It’s ripe with danger, complexity, and opportunity for profound spiritual transformation. That is, it’s exactly the kind of premise I’d want to expose my kids to.

Uppity, badass, disturbingly sexualized teenage cave girl Eep journeys from one patriarch (Grug, her father) to another (Guy, the surfer-dude boyfriend-to-be). Dad represents the Old Way—“Remember to never not be afraid!”—and Perfect Pecs represents the New—“We use our brains now!”*

Smart, dextrous, mold-breaking Eep can look forward to a new life under new leadership: her very own man, her very own age. Exactly the kind of moral I don’t want to expose my kids to.

This is useful. It’s useful in the way all manure is useful: as compost.

Everything this movie left out left me inspired. There was so much more the writers could have done with that “world ending” conceit, which would have been perfectly suited to a kids’ movie:

What about gender? Patriarchy vs. Matriarchy? What’s the purpose of these stories? What’s the overall cultural investment in producing such an unremarkable, ironically status-quo-upholding pile of problems?

Just a couple days after this shit-stack appeared in my life and already I’m brimming. New, transformative, nitrogen-rich ways of thinking are sprouting new ideas for a novel I hope some day to expose my kids to.

So actually, thanks, Dreamworks. You know, it was worth my $2.50 after all.