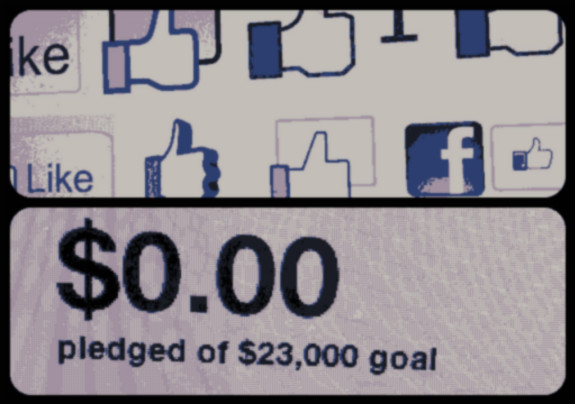 At some point in my early adult life, I learned to keep my distance from needy friends.

The ones who were always hinting at getting a ride, or borrowing your lighter, or drinking your last beer, or eating your leftovers, or (the worst) needing to talk to you about their feelings. I still appreciated them as people in my life, but knew that any relationship that the two of us formed would never really escalate past parasitism.

As a musician, creating and developing a symbiotic-feeling relationship with your fans is nearly impossible. Self-promotion is a very basic requirement of this DIY music culture, which we’re all struggling to figure out, and it floods our Facebook and Twitter accounts every morning. Go to this! Come to that! Support our Kickstarter! Like our page! Share our video! Buy an advance ticket! Request us on the radio! We have become, through the best of intentions, everyone’s most annoying and needy friend.

Fans generally comply with these barked requests until they start to feel slighted, or worse, taken for granted. They come to the shows they’re invited to and watch you play the same eleven songs every month, until they get tired of the songs. They follow you. They like your posts. They subscribe to your e-mail lists. They donate to your fundraising drives. They obediently jump through every hoop you set up for them, all in exchange for the songs you’re providing to them (and hopefully your undying gratitude).

But this relationship is unsustainable.

Even the most die-hard fan will eventually get a little miffed when they pay some outlandish ticketing fee because they were told the show was “very close to selling out” and then arrive to a half-filled club. They’ll feel gypped when they receive a beat-up manilla envelope in the mail with a sloppy “Thank you” scrawled on the outside, and a scratched mix CD for their $100 donation—that they made six months ago. At some point, your fans will feel a bit jilted, find another band that is eager for their attention, and move on with their lives.

Fans don’t automatically come with your music; they’re drawn to you for one reason or another.

It’s easy for us, as musicians, to take our fans for granted, or treat them poorly without even thinking about it. I’ve often heard musicians make the comparison between band relationships and romantic relationships, but our relationship with our fans is even more complex. We have the famous fourth wall on our side, that invisible partition between stage and crowd. It’s that separation that makes us the ones worth paying attention to, the ones worth listening to.

I’ve written about the art of gratitude, the importance of taking care of your band members, and of course, your other collaborators/poster designers/web gurus/helper bees. But we as a group still struggle to express gratitude to our supporters that doesn’t feel like a shtick or a thinly-veiled bone being thrown. Fans don’t automatically come with your music; they’re drawn to you for one reason or another. You earn them through live performances, interviews, stand-out achievements and visibility. But how do you keep them around?

I don’t have an answer, and I’m not sure that a good one exists. No Soliciting isn’t it.

The degree to which anyone exposes themselves as a human to their audience is obviously one of personal taste. I will say, though, that in my touring experience, visiting the same cities over and over again, that people who I met first as fans have become my dearest friends, my patron saints, and my trusted advisers. One even became my husband—not to brag, or anything.

It’s alright to ask your fans for favors; in fact, without the cushion of a record label supporting you, it seems necessary in a lot of cases. But every so often, it won’t hurt to ask what you’re giving them in return. It’s completely valid to want to keep that fourth wall up and maintain that intrigue, but asking for Likes, retweets and donations reaches through that wall as well, without giving anything back.

Establish your own off-stage, online personality—one that doesn’t include bumming cigarettes or asking to borrow cab fare. Consider that each humble request you send out to your fans may eventually lead to a lack of interest in your music—or worse, a loss of respect.