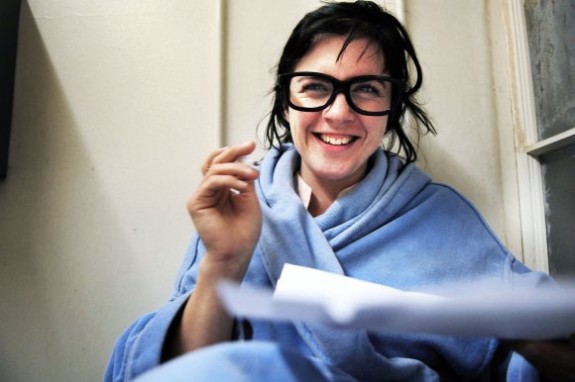 My first day as Editor-in-Chief of The Daily Lobo, I came to work in a bathrobe and empty-frame glasses to help breed a chill and eccentric work environment. I think I’m the last newspaper editor to mark mistakes with a red pen.

In this field, your experience counts more than a degree.

You can learn in a few months in a newsroom what journalism school would drag out over four years. What sorts of things will you learn on the job? AP Style (for instance, it’s Canada goose, not Canadian goose; Palestinian territory, not Palestine; Xerox is capitalized), media law, how to hook the reader with a good opener, how to interview and research.

It’s not rocket science. You don’t need to spend thousands of dollars to learn this information. You can learn about media law by reading a book, and you don’t need to take a test.

Don’t just take my word for it. In 2011, journalism topped The Daily Beast‘s list of 20 most useless degrees. In short, your best bet is to write for your school paper; go out and find any publication gig you can, even an internship. If you are open to learning how to write clearly, and can meet deadlines, you will naturally advance.

Eight years ago, I was in Portugal, reading a book by Myles na Gopaleen, who wrote a column for The Irish Times from 1940–66. His columns were masterworks of plain-clothed satire; so creative, so brilliantly engaging. You felt like you were in the middle of a good-hearted argument right at his desk! I wrote a letter home announcing that I wanted to have my own newspaper column. Little did I know that six months after returning to the States, I’d be working my way toward an editor position.

It started simply. I just walked into the New Mexico Daily Lobo student newspaper, slammed my fist onto the counter and said, “I wanna write for the paper!”

I ended up there for five years, never took a journalism class (except for a 400-level mediation course [no, not meditation, mediation], offered through the Journalism Department), and seized tons of opportunities to work as a writer, editor and photographer. Everything I learned about journalism I learned on the job, like they used to do back in the day.

Before I had ever considered writing for a newspaper, I read an article by Lewis Lapham, former editor of Harper’s Magazine. Lapham recalled how journalism used to be a learn-on-the-job trade profession. Journalists (called newspapermen and reporters) were considered akin to second-class-citizen-winos. And then, as television became big in the 1960s, journalism became glamorous. We started to lose national enthusiasm for avant-garde writing as a path to truth.

I knew the English Department had a stronger professorship, so I took a couple editing classes with them. And I took some professional writing classes from James Burbank, who I admired for his satirical letters to the editor. I went to meet him one day, just to see who he was—this guy writing the funniest letters on the Lobo‘s Opinion page—and I went on to learn a lot from him.

They don’t teach you work ethic in the classroom.

They teach you the crap you could pick up in five minutes while on assignment, except they drag it out. After all, you paid them thousands of dollars, so they must make it look like it is going to good use. I worked with many people in the UNM Journalism Department; I saw what was happening. 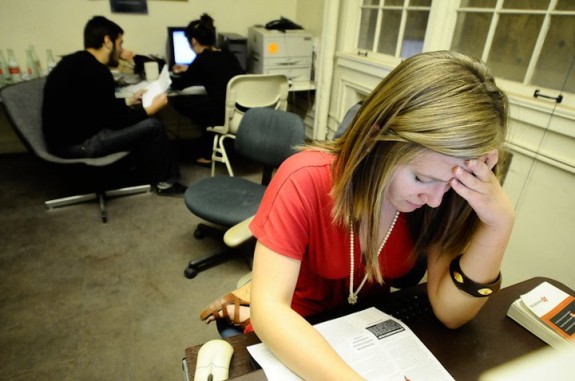 Late in The Daily Lobo‘s Copy Cave, where we’d edit the paper nightly. Incidentally, none of the editors pictured here (L to R: Damian Garde, Eva Dameron, Tricia Remark) were in school for journalism.

Tricia Remark worked as a reporter, Assistant News Editor and Copy Chief during her two-and-a-half-year career at the Daily Lobo. Now working at a publishing company in New York, she double-majored in English and Psychology at UNM, and has no regrets about not going to journalism school. She only wishes she’d learned more multi-media skills, such as video production.

“The reason I started working at the Daily Lobo was because I just thought that’s what English majors did,” Remark said. “I asked for an application, they hired me, and I realized there was a Journalism major, but I felt I was getting so much experience writing at the Daily Lobo, I didn’t feel like I needed it.”

She did say that taking a media law class would’ve helped her; the media law she learned came from people who had taken it from the Journalism Department.

“I honestly don’t think you can learn the skill of interviewing someone and writing unless you’re doing it. I learned what kinds of questions to ask; I learned how to do research before going to the interview—and a lot of this was on a trial-and-error basis. If I did an interview and it didn’t go so well… I learned how to deal with different kinds of people. Some people don’t like to talk, some love to talk.”

So be persistent; always meet deadlines; take interest in the world around you; find interesting stories and take the lower-priority ones you are assigned.

As a bonus, any experience as an employee of the media makes you instant kin. Even when someone says, “I worked for my high school newspaper!” I feel a warm glow for them. Isn’t that crazy and stupid and nice?

I learned the most from the red pens of my editors.

I think I started in the last few years of editors marking up real paper articles with a real red pen. Early on, I would print out my article and hand it to the desk editor (Sports, Culture, News, etc.). He or she would take a red pen to it. Then the Managing Editor would take a pen to it. Then the Editor-in-Chief would mark it up more, and then give to the desk editor, to hand back to me.

At first I got real bloodbaths.

Newspaper editing has its own system of proofreader’s marks: underline a letter three times to capitalize it; make a big P behind a sentence if you want to move it to the beginning of its own paragraph. That sort of thing. Over the years my copy started to come back clean, so I could literally measure my success by how many red marks I had. Maybe the principle advantage of this system is that the writer could learn from the marks, and practice those lessons.

Today, they just edit it on the computer. Unless you’re called over, to point out something specifically, you won’t soak up the editing process as thoroughly—which is what makes you a clearer writer.

So what the heck can you do to get all this experience, anyway?

Keep a blog. Get an internship. Submit freelance requests and story ideas. Talk to other journalists. Work at the student paper while pursuing a degree—in something else. Nothing will endear you to a mentor like a moldable spirit.

In the world of journalism, persistence pays off. In most instances, contacting someone too much is annoying. But journalists and editors get so many emails, and are so swamped with obligations, it is considered polite to send reminders and follow-ups. Make it easy for an editor to work with you. Then hold on for the ride.