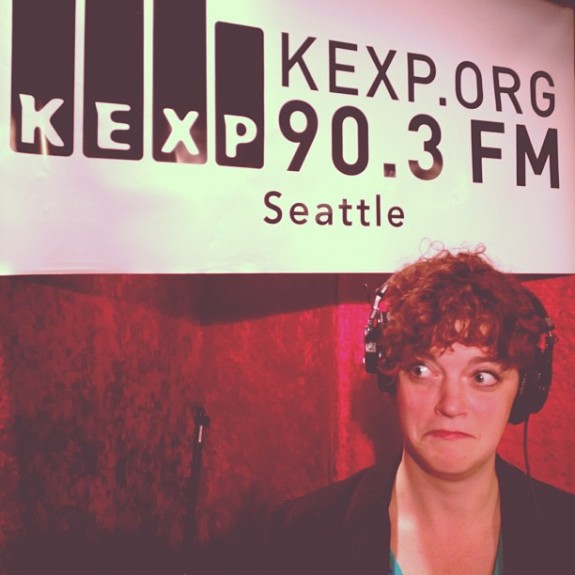 “What a glorious feeling, I’m happy again!” says no one in Seattle, ever. The idea of being blessed with rain in sunny Hollywood (as Gene Kelly and Debbie Reynolds were in the 1952 movie this article is aptly titled after) is almost laughable to any resident Cascadian. The dismal and grey wet season that spans October to May is the perfect breeding ground for kinnikinnick, fungi and lush, dismal music.

I moved here from Boulder, Colorado almost seven years ago.

Say what you will about Boulder, it does boast 300 days of sun a year and the most polite and good-natured homeless people you will ever come across. This was one of the reasons (and the only one I care to admit currently) that I spent my first four months in “the city on the sound” self-confined to a windowless 8′ x 10′ room with 14-foot ceilings in historic Pioneer Square.

The first week I was in Seattle, I saw a homeless woman bum a cigarette, borrow a lighter, then throw the lit cigarette BACK AT THE GIRL WHO GAVE IT TO HER. She apparently didn’t like menthol. I witnessed bridge-and-tunnel club girls trying to wrangle their thongs off from around their stilettos in time (usually) to urinate in the alleys surrounding my apartment building. And, also, it was Seattle in February, so the weather oscillated between rain, windy rain, and super-windy rain. After my first few days toughing the big city, I decided to devote my time instead to microwaveable humbow from the nearby Asian market and teaching myself how to poorly make multi-track recordings on GarageBand. I could explore Seattle, I reasoned, when it wasn’t raining.

At the time, I didn’t realize that wouldn’t actually occur until Easter.

The laziness and general ennui caused by 16 daily hours of darkness, combined with the constant dampness of everyone and everything, made the outdoors (and any occurring activity that involved transporting myself through said outdoors) seem just a little too far away. It was in this stark room that I wrote my first handful of songs, and in a series of other dark apartments scattered through central Seattle that I wrote my second, third and fourth.

We just hide during the winter, either in our own homes, concocting and creating, or in bars and other people’s living rooms, discussing our latest concoctions and creations.

My life in Seattle, in this case, isn’t particularly interesting or original, but it is one that is shared by the other Northwest musicians who I have grown to admire over the years. Music here for many is a solitary art form, and when additional people are brought in, you can expect them to linger a little longer after rehearsal before returning to the soggy outdoors.

There are plenty of other contributors to the Seattle music scene.

These include our top-notch radio station KEXP; well-established once-indie label Sub Pop; overnight successes like Macklemore, and rising stars like Pickwick, La Luz, and Allen Stone; our pretty cool music festivals (as cool as music festivals can be); and our kickass alt-weeklies, to name a select few. We have the highest minimum wage in the country; coffee shops on every corner, all pretty busy in the mornings; and bars on every corner, all pretty busy in the afternoons, all of which which make it fairly easy for a threadbare musician to land a job between tours. Not to brag, but I think we are well represented in most genres and have the venues to support them, ranging in size from humble house-shows to 1000-seat theaters.

If you’re new to Seattle and you move here in the winter, you’re going to have to hustle a little bit to make friends and you’re going to have to put in some time in the “weather.” They say you have to live in New York City for seven years before you can really say you live there, and I say that it takes about two years here to feel like it isn’t on the verge of spitting you out. Some call it “the Seattle freeze,” but I’ve never taken it as intentional slighting. We just hide during the winter, either in our own homes, concocting and creating, or in bars and other people’s living rooms, discussing our latest concoctions and creations.

We, the artists, don’t go out to socialize or meet new people.

We all have three to eight people who we trust, respect, and probably live near. For us, that’s plenty. More friends means more braving more rain, and more time away from our warm, dry homes. Don’t take it personally.

Seattle has never really felt like my home, but that’s why I keep coming back to it. There are always new buildings going up and familiar watering holes being chased out of business (by raised rents and renewed leases), but the same waxed-moustached bartenders and baristas pop up over and over, working, touring and pouring somewhere else. It stays the same long enough to miss it, and it changes enough you don’t get sick of it for long.

I’ve only spent three of my seven years in Seattle in Seattle due to extensive touring.

For those who prefer not to embark on 14-week tours, Portland is a short (and lovely) train ride away; British Columbia is a ferry ride away; and San Francisco is just a two-hour flight. Sometimes I’ve kept a job and an apartment waiting, sometimes I’ve moved out completely. During my last “visit” to Seattle (a Christmas break between a 14-week national tour and an artist residency in Iowa), I sang with a Seattle musician who ended up following me around on tour for about six months…before we moved back (for good, as of now), got a dog, got married, bought furniture, and settled in.

I’ll only be in Seattle for two of the next six months, but I do have a home setup now and possessions I’ll be more hesitant to move to the curb. I’m fortunate enough this year to be spending the most abysmally bleak months in New Zealand and Australia. But I’ve cozied up to winter life in Seattle, with phở, mulled wine, and late nights at the piano.

The music I value the most, and relate to the best, never sounds like it was written on a tropical beach with a half-finished daiquiri in the sand, next to bare toes. It sounds like the weather up here: dark, grey, damp, and tired. It may not sound like paradise on paper, but its shortcomings, from far away, make Seattle a perfect permanent artist’s retreat.