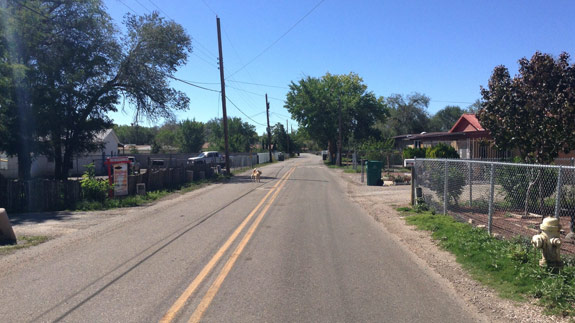 A quiet street in a quiet neighborhood, a few minutes from downtown, was all I wanted, after all.

I cut my teeth in the Boston poetry slam scene.

Every Wednesday of late ’99–’01, I sponged each turn of phrase from the Cantab Lounge’s downstairs stage. I fought for every respecting nod, became a regular, and cobbled the beginnings of my style. I clicked my teeth through the winter. I started making books.

In college, I helped run the show. We hosted regular open mics, slams, festivals and poets, lead poetry-oriented orientation groups, made life-long friends and nemeses. I read and made many books. I traveled, grew lonely, grew from my loneliness, and wrote poems about it. They were strange, soaked in the surreal. They were mine, in an alien way.

I took those poems on a national tour. Slept on couches, heard hundreds of new voices, and even tangoed with love. (It found a new partner.) Massachusetts welcomed me back with ice under its fingernails.

So I moved to Albuquerque.

The national slam community had opened my world, filed down my sensibilities, and offered me couch after beer after couch. In 2005, Albuquerque was hosting the National Poetry Slam, and I was going to give back, goddamn it. Hell, I was going to push minty-fresh books from my newly minted poetry press just in time for it.

And it went great. Poems splashed everywhere. 60 people read 30 kinds of work till all hours on my roof. A dozen slept where they fell. We ate chile-heavy breakfast burritos in the hard sun, and did it again. Marriages dawned and faded, the host hotel pool swam with naked people, and Team ABQ took the gold. It was, well, legendary.

And I was really confused.

Suddenly I was at the edge of adolescence. If I didn’t keep moving, I’d have to find steady work. Wasn’t I going back on tour? Why was I signing a six-month lease? Why was I editing more books? Damn it, I was starting to fall in love again.

I looked back to those dream-drunk travel poems. I wrote more of them. Love got crafty. I designed and published more books. I started my freelance career while clerking at Hollywood Video (two months), grunting in a handmade paper mill (one month), ironing T-shirt transfers (one week), and packing medical textbooks in a small warehouse (15 months).

None of these paid much, and my freelance income was also meager, but the cost of living was low enough I could hack it. I could even buy a beer from time to time. I started to notice most of the demands of this place were more psychological than economic. I like that.

Then I met my muse.

I guess that’s out of the bag now. But don’t get to thinking because it’s fiction it’s not also true. Ask any New Mexico native. Maybe you’ve never heard the story of so many cars breaking down down outside Taos, or Santa Fe, or Hatch. Across from the mechanic, you notice land is cheap. Cheaper than where you were headed. 40 years of turkey farming later….

If she likes you, you will not leave easily. (If she doesn’t, you’ll break off your mirrors on the way out of town.) After about two years, I was living in the heart of downtown off freelance work—albeit barely. Meanwhile, I was retreating into a few friends and an overpriced cafe booth, and writing a still-more alien kind of poem.

In fairness, it started in Massachusetts, where someone stole my laptop. But a few months later, Albuquerque stole my heart, by giving me something much more powerful: a 1941 Royal Arrow Portable Deluxe. I started writing poems about Massachusetts through a New Mexican lens.

Only in Albuquerque does this happen.

There are few places as hip, affordable, loving, bike-accommodating and culturally deep-pocketed as the Duke City. It has held me safe during so many dangerous nights, nourished me with life-long friends and more than enough drama for drinking stories. I’m sure some of that’s been the function of privilege.

It’s been seven years since I started writing those poems. They’re steeped in a kind of thinking about place that Albuquerque led me to, with its unique insistence, among American cities, that identity comes from land, and from story. Along the way, I’ve found miraculously cheap, wonderful housing. I’ve found communities of both poets and farmers. (They sometimes overlap.) I work from home, mostly seeking money from out-of-state clients, who are surprised by my low rates, and pleased I don’t have to charge them tax. I write this now accompanied by the eardrum-bleeding screeches of roosters outside my door, only 12 minutes by bicycle into the heart of things.

I even found Pyragraph here. Or, I should say, it found me.