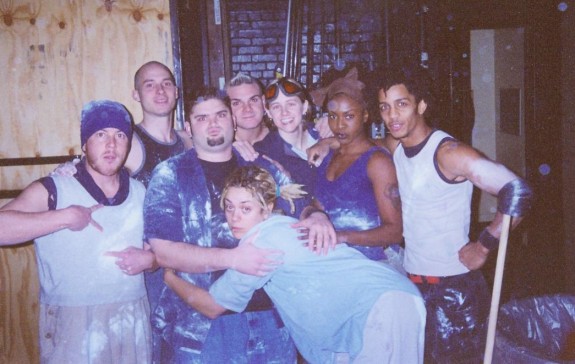 Simply asking a touring artist to wake before 9am spells a case of bad attitude.

It was supposed to be an honorable, private tour through the nation’s Capitol Building for the cast of STOMP, while we played Washington DC. It turned into one of the most humbling and accidentally outlaw events of my life.

My cast-mate, VD, and I were particularly uncool at the start of the tour, having missed those vital hours of beauty sleep after rocking another late-night performance, and the social life after. Our grumps turned to groans as we were directed to stand single-file, to wait as our personal items were gone through and bodies frisked by uniformed guards with very little sense of humor.

Eventually we made it beyond the concrete threshold. A strange feeling crept up my spine as I groggily made out the expanse of giant, square, unforgiving marble tiles I was to follow down.

I did not belong here.

The ungodly hour, lines, uniforms and body searches screamed “follow the rules” to me, and as an artist, I don’t.

From my creative perspective, it was obvious: Whoever built and daily fortifies these walls was scared. Scared of surprise, scared of genius, scared of coloring outside the lines—scared of freedom, and therefore scared to die. Walking inside the lines is controllable; right angles are predictable, concrete is dependable—all the things life is not.

We proceeded down a hall looming with stone statues depicting almost exclusively old white men with their cold noses in the air, chests puffed up, one frozen hand clutching a lapel and a grotesque metal plaque detailing how they did something “important for the world” like discovering, conquering, or ruling. I constantly referred to my girlfriend, VD, for validation: “Am I the only one who feels like vomiting here?”

The nausea turned to satire as we entered the revered dome room.

That is, the room where one can whisper from one side and be heard clear as day on the other. I positioned myself far away from my girlfriend cast-mate, took what I felt was a quiet moment for some political performance satire, and whispered, “Pssst, VD… Look, I’m posing for my statue.” Then I dropped my pants, stuck my nose in the air and puffed up my chest, as if I had discovered the Mississippi River or something.

Apparently, my whisper was well-broadcast thanks to that damn dome, and my pantless display was in no way concealed by whispering, either. It took the uniforms no less than 10 seconds to descend upon me and promptly remove me and the entire cast of STOMP from the nation’s administrative capitol.

All I could think was: Scared to die! All of them!

Why else do they immortalize themselves in statues, build impenetrable structures of marble and create a universe with no variables? More subtly, why do they compulsively reproduce: products, wars, human beings? They reproduce with the hope that something will outlast their precious, meaningless, short lives. A subconscious fear of death drives them. A subconscious fear of life.

Many years and experiences later, I sit at my screenless window, wide open in Hollywood’s September. I’m congratulating myself for breaking free of the subconscious death-fearing system. By surrendering to the financial instability of an artist’s career, by wearing sequins and bright colors and using my body any way I like, by choosing to not have children, by facing my fear dead-on (so to speak) and seeing what genius comes of it.

But deep down, am I not still just a small step away from the line-walkers? Perhaps I’m not as fearlessly mortal as I believed.

Harbored in my heart somewhere is my artist’s desire to create something so impacting it actually changes the trajectory of human evolution, and earns me a fond memory as “one of the greats” when I am childless and gone.

I, too, fear death. My human issues just look prettier than theirs.