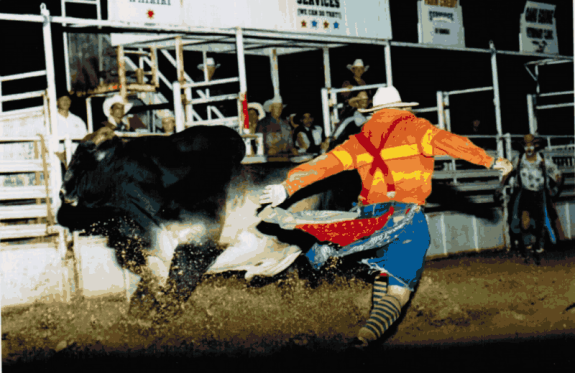 I’d stay up all night, worrying the shit out of myself, staring at the clock, begging my mind to retreat from the grip of now, and let me sleep.

Your body needs the rest, man. Rest, I’d say to myself. Please rest. Without rest you might get killed. And then the words of one of the other Rodeo Clowns would come back to me: “It is a good day to die.”

The alarm would toll long after I started staring at the clock. I’d have to help ready the arena, set up for the show (they call it a “show” in rodeo), and I’d forget to be scared while I worked. Blood, sweat and hours later, after the crowd arrived, the roping, the barrel racing, the other stuff, we’d buck the roughstock, the bulls and the broncs. I’d be in the arena most of the show, with cowboys who had cowboy names like Bobby Joe Carlton and Lee Clark.

We’d be in our clown outfits, specially made to tear off completely if we got hooked. The bulls would burst out of the chute, enormous, fast as cats. I’d be there, peripatetic rodeo clown, touching the bulls as they bucked, watching them, occasionally catching a hit, the hormones pouring from my adrenal gland like water from a gutter.

God. God, if he exists, is the adrenal gland.

There cannot be anything more sublime than a massive dose of adrenaline, and only fear can really squeeze that much nectar from the gut of the Almighty.

Without it you would not be here. It is as important as the heave of your chest and the thump of your heart. You can use adrenaline to sprint from a lion, for instance. Or you can be overcome by it and stand, deer-like, in the path of a bullet. But, fear will always destroy whatever you’re doing if you’re overcome in the act of it.

When I raced motorcycles I wanted to come off the track after a race and then, only then, shit my leathers. If I shit my leathers while I was racing then I wasn’t going fast enough to shut down the inefficient, cognating, pants-shitting part of my brain. Worse, If I didn’t shit my leathers at all—before, during or after—I knew I hadn’t even tried.

If you’re not scared at all you should probably be doing something else. Like dying. Which is probably what you are already doing.

It costs a shitpile of money. It has virtually no chance of paying for itself. Why do it? To make something beautiful?

The only way to make something beautiful is to scare the shit out of yourself worrying about it. Then forgetting all that and making it. Safe can be beautiful, too, when it is the appropriate response to your circumstances. Feeling safe about a film you made would suck. That’s not when you want to feel safe.

One of the rare moments in my life when I felt safe was when my closest friend gathered me from the side of a road 100 miles out of Albuquerque. I’d been wandering the highways for a month, hitchhiking, sleeping wherever, bathing in creeks. When I gave up I called David from a gas station and asked if he’d mind coming to get me out there in the middle of nowhere. I couldn’t bring myself to hitchhike the last few miles home.

I sat in his passenger seat, the door shut, the sound of the highway cut off, and the world seemed to slow down. The fear from that endless, naked feeling you get on the road—that fear that doesn’t let you sleep, doesn’t let you trust anyone, all of that just faded away. And I remember sinking into that chair and thanking David for more than he knew. 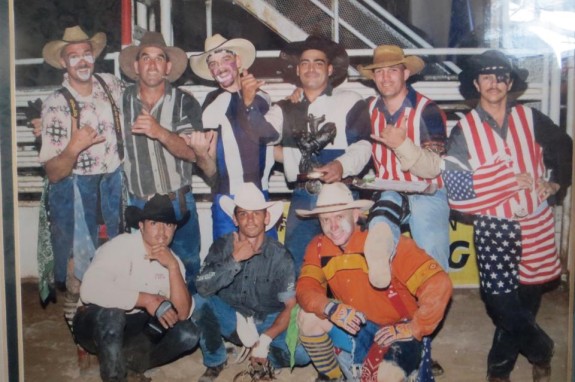 The author (kneeling in orange) with the gang during his rodeo days.

If you could put that feeling of safe in a film, then I’d say abandon fear and make your millions on safe. But fear is easier, more accessible to those of us so fucked up that we really, actually want to make a film. If you want to be safe, go with fear.

There is a moment from one of those rodeos.

I’d not slept. We’d been running all day, two shows, and then, finally, it was the last event, bull riding. I wasn’t sure I could do it, but I cowboy’d up. I was there for bull riders in trouble, and my fellow rodeo clowns. And then that was over.

I was so tired. I remember my legs giving way under me from exhaustion, the sweat and splattered mud running down my face, the smell of bovine feces. And I was so happy it was over, still redolent in adrenaline; but slowing, time slowing. The stockman called my name. The crowd was still there. He wanted me to fight a bull.

He wanted me to fight Smokum, 2,000 pounds of pure, righteous animal. I couldn’t do it. I had barely the legs to get me out of the arena, let alone fight. I turned to Josh Rees, one of the clowns, the one who had always said it was a good day to die, and I said that I could not fight the bull. I knew that I was betraying the cowboy code. But I knew that I’d likely be seriously injured if I tried to stand and face Smokum. And I wasn’t really a cowboy, anyway, more a drifter. There was no need for me to be injured for something like “it is a good day to die.”

Josh: “This is when it counts.”

So I turned to the stockman (and I remember that distinct feeling of my shoulders drooping, resigning) and I nodded my head to let him know to let the bull out. My first thought was that I might just stand there and get blown off my feet and smashed into the arena fencing behind me.

But then I realized that I still trusted my legs to move my body when the bull charged, and I trusted my feet to dance above the hooves as he struck out at me. And I trusted my brain to stay the fuck out of the path that connected adrenaline to muscle. And the mind stayed away, and fear did its job without having to suffer any editorial commentary.

Smokum and I danced.

I remember the softness of his nose as my gloved hand glided over it. He passed me in a miss. I remember us staring at each other. He was huge. He was a real Brahman, royalty, and I was teasing him like a jester. I turned in my all-time best performance of bullfighting, American style.