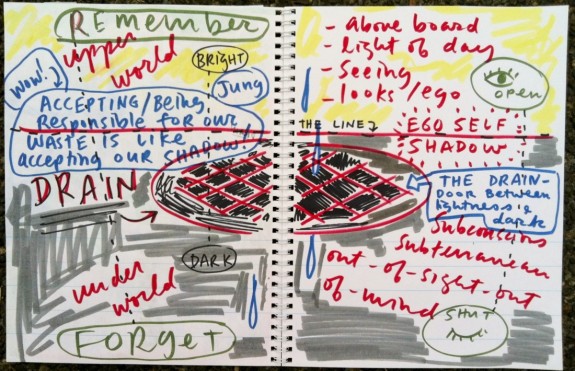 What we waste goes down the waffle drain. My notebook of ideas.

I never thought this could happen.

For years I have been a visual artist and a cartoonist, but as of this summer, I have been beckoned by the Muses for a brand-new purpose. I have been called to be an artist of, for, about and around the people.

I have become a Public Artist!

Like the gospel song says, “I got over” by receiving a link from my pal Terrell with the opportunity to create a comic book about household hazardous waste (HHW) for our county, then by blowing off her tip off for weeks, and finally applying at the last second. You know, the usual.

I became one of three finalists. The others were a cartoonist I know and whose work I adore, plus a guy who does more action-figure stuff. The nine panelists at my first presentation-interview included hazardous waste experts, a Spanish language translator (the book will be printed in Spanish and English), a local graphic book publisher/editor, a famous graphic novelist whose book about her bipolar disorder is a New York Times bestseller, another animator and folks from the local cultural center, which is mediating the project.

Besides having the time written down wrong and being tardy, my first meeting with the panel was exhilarating. My sister had given me a haircut and freshened up my blue dye job, plus I wore an ironed shirt/skirt combo in tones of red and pink. Like a funny Valentine. Just being presentable for me is huge. I work from home day and night, with only a mother who has dementia, and two dogs who could care less if my hair is brushed, let alone clean.

At the interview I enjoyed sharing a memory-lane slideshow of my work. We finished up by answering questions that had been sent to us finalists in advance. Among them was this gem: “How might you approach creating work that is both informative and artful, to offer both clear communication and a compelling art experience?” I replied something about a “call and response dynamic, what in singing is called disambiguation”–go figure! Sitting before a panel of professionals had me feeling so professional myself that my inner frat boy didn’t need to blurt out even one penis joke! Call it a miracle.

Now I am in what my contract calls “Task A: Research and Preliminary Development.”

During this stage I have kept a notebook of ideas, such as the revelation I had about our waste representing the dark side of ourselves that we don’t accept. Until we accept what Jung calls our “shadow selves,” our waste will always be a challenge—an out-of-sight-out-of-mind-until-it-bites-you-in-the-ass sort of deal. 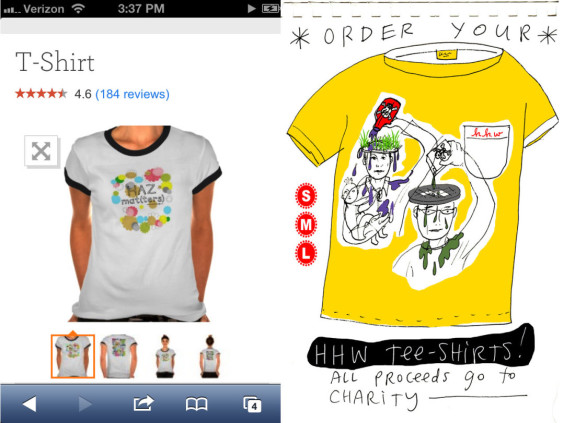 I also designed a T-shirt that reads “HAZ Mat(ters)” on the front and has a grid of natural product recipes on the back. I had it printed and am wearing it. I drew pages of floating organs affected by toxic chemicals, with lazy people pouring solvents down drains and saying things like, “O, a little bit won’t hurt,” and “Those goddamn green liberal freaks, don’t tell ME what to do!”

Last month I threw a DIY party on how to make natural cleaning and personal products. The homemade toothpaste was a hit! Also, did you know that vinegar and baking soda can clear a drain as well as Drano? Naturally I was willing, for the public good, to clean our entire house (admittedly with !), prepare a spread of food and refreshments, and indulge an anxiety attack about making people, who may never appear, come to a party to help with HHW comic book ideas.

Other research highlights include being taken on tours, including one to our local landfill. A nice man drove us through off-gas-pipe-sprinkled grass-covered hills of decades-layered garbage (the first was put down in 1963; I was told that they morph into what appears to be gray rags). He wistfully told us that he hung out there as a child when his father was an employee. 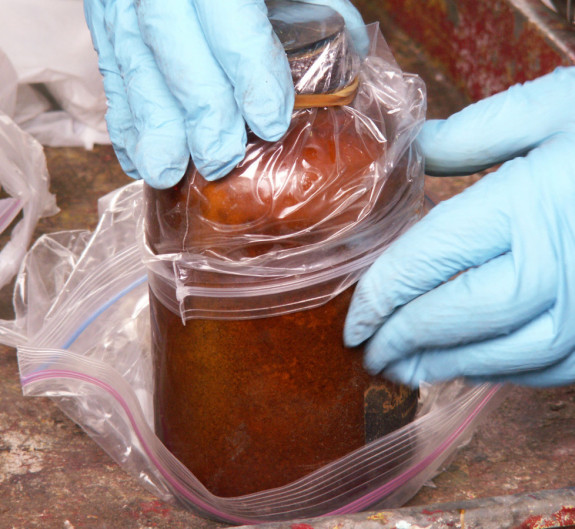 At one of the household hazardous waste drop-off sites, we got to hold jars of mercury, also known as quicksilver, and marvel at its weight and mystery. When an ex-gold miner drove up to drop an ancient jar of blood orange-hued cyanide, everybody gathered ’round as if to ogle a brand new baby.

Later, in the lunchroom-lounge trailer, we watched a short slideshow of oil-based paint being processed, colorfully abstract photos taken by a spiky-haired employee named Lauren.

Come November I shall be deep in “Task B: Conceptual Design Development.” The final design, “Task C,” takes place in February.

At any of these stages the panel can tell me that my ideas suck without exception, and that I need to return to the drawing board.

But I can handle anything because, as you know, I have officially and spiritually transformed into a Public Artist.