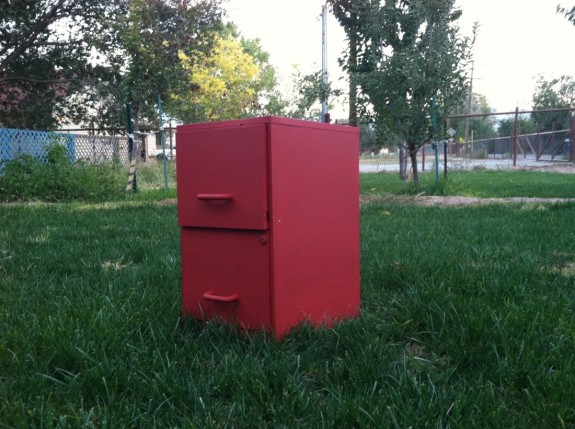 When you’re excited about becoming self-employed, but, say, still slinging hipster food to the yuppies, what could possibly mar your rosy visions of a non-food service-bound future? You know, other than the horrific possibilities of eviction, starvation, and eventual destitution?

Taxes for the self-employed.

You could, potentially, have a serious mental block about taxes. Like me.

I was thinking last year, within the first few months of ditching my food service job, maybe at the end of the year I’ll gather up my receipts or…or go through my entire year’s worth of bank statements and…ach! Don’t wanna thinkabboudit. Listen, how about we just bake some cookies, instead, okay?

Actually, I don’t know what I was thinking at all, because I had no idea where to start. In fact, it was only at the questioning of a friend (Peri Pakroo) that I was forced to answer: I don’t know anything! I don’t know what to do! She offered to point me in the right direction. We did some trade: business advice for child care. She told me how to keep track of some things. Set me up with a simple system for dealing with this stuff.

Then I got to thinking…I don’t make that much money. Taxes can’t be that hard, I said! My stuff isn’t that complicated, I reasoned! I can do this own my own, I wagered! I just needed someone, a tax professional, to guide me. So I met with an accountant, and told him I was interested in doing this myself, and asked if he could help me. Then, during the half hour that we met, I started getting confused. I started feeling overwhelmed. I started feeling, like, hey, maybe there’s a reason there’s a whole fleet of people out there in our country who specialize in this shit. I became convinced that this tax thing is, you know, complicated. And that I didn’t, actually, need to know much more about it that I already did.

There’s just a few types of things you need to keep track of. And by few, of course, I mean everything.

Keep track of everything.

And by everything, I mean all the money you earn in your business—which is of course your income—and all the money you spend in your business—which is calculated against your income and is otherwise known as deductions which basically means less tax you have to pay, yay! So, logically, if you’re keeping track of all income and no expenses, you’re paying too much in income tax, and if you keeping track of all expenses and no income, then you’re committing tax fraud and might could get in trouble.

“But Sage, what the hell am I supposed to be keeping track of?” you might be wondering. Well. There are more than a few websites that pop up when one does a Google search for, say, “musician’s tax help.” (By more than a few, I mean around 32 million.) This one and this one have basically got you covered on the deductions front: They talk about a whole host of different expenses a musician should be logging. And here’s a helpful article published by a New York musician’s union. And a rather depressing article by NPR which explains how the IRS treats your music business.

That’s pretty simple, right? You can do this in a multitude of ways. I use Quicken and a series of Excel spreadsheets because Peri taught me how to use them. I suppose you could do this in any way you like, though. By knitting your tax records into a scarf in binary. By using toilet paper scrolls and calligraphy paint brushes. Last tax season I saw someone with what seemed like a year’s worth of receipts and a single notebook. And a pen. That’s crazy, right? I mean, this guy owns a laptop. (I’m kidding. I like analog things.)

So, your tax duty is to keep track of the numbers on your end, and keep track of where those numbers came from (receipts, etc.). Your accountant probably won’t want anything to do with your receipts. He’ll just want numbers from you, at which point he’ll do magic tax math on them. The only reason you’re keeping your receipts (in a clean and organized way, not all jumbled around in a big cardboard box like Maggie Gyllenhal briefly did in Stranger Than Fiction) is just in case the IRS wants to root through them later.

Then, you start writing the checks: to the federal government, to your state tax agency (plus to other states’ tax agencies, if you’re a touring artist or something), plus the one to your accountant, which I’m pretty sure you get to write off on your taxes the following year as a business expense.

And the best deduction: mileage.

Do you drive a car? Well, then, start a mileage log, because my accountant says it’s the best deduction you can claim. (Or maybe your accountant will say something else entirely. Things are different in different states! It’s a confusing country.) Seriously, start today.

Get a tiny notebook, write down today’s date, and whatever the mileage is on your car currently. Then you can start the actual log, which will consist of four things: 1) date, 2) miles driven, 3) destination, and 4) purpose. You can buy a mileage log, or, like I said before, make your own out of tiny cute pocket-sized notebooks. Or, get your hands on a papyrus scroll, or type everything in on the numbered keypad of your flip phone, or make tiny notches in your cutlass. This log, of course, will only ever be looked at by an ever-odious IRS auditor, should an audit ever, sadly, happen to you.

You’ll use your log every time you drive somewhere that’s business-related. Log the trip to meet with that guy who’s selling the melodica on Craigslist, and when you go to the thrift store and find a cheese grater you’ll use as a part of your one man band wearable DIY percussion kit. At the end of the year, when you’ve added up all these trips, your accountant will probably want to know two numbers: how many total miles you drove, and how many miles you drove for business purposes.

Use folders. Use financial software, if you feel like it makes things easier. Use a filing cabinet.

I picked one up at a thrift store. I painted her red and named her Bessie for the purposes of this blog. because she didn’t have all the right innards, making it impossible to hang any hanging file folders in her belly. I kept the receipt (a whopper of a purchase—$5) and can now write it off as a business expense.

So, later on, as a more informed filing cabinet-buyer, I fully inspected a bland off-white dude and, seeing that he was totally outfitted with all the creepy-looking metal organs, brought him home. Named it Jo. (Now she’s a lady.) Tried to dress her up a little with a scarf, but I’ll probably give her a paint job too at some point. Maybe robin’s egg blue?

In any case, I now own a functional filing cabinet and I feel like a grown up. For reals.

I made a special savings account because I was totally freaked out about getting a tax bill I couldn’t afford at that most dreaded time of year. So I asked my accountant about it and he gave me a roundish percentage. An idea. A guess. An estimation. I’ve been putting that percentage of income away in a special savings account named, “Taxes.” Yes, very clever of me, I know! It was at the time of this account’s creation that I learned that this is the most popular name for savings accounts, at least at my credit union.

Get a friend like Peri to plumb the depths of your tax ignorance. If you don’t know Quicken and Excel and all that, ask someone to show you, for free or for trade or beer or sherry or pumpkin pies.

Hire an accountant. Ask your friends who they use, then set up a meeting and stop worrying about taxes for the self-employed. (Or, worry about them in a completely new and different way!) Lots of accountants are happy to do a short free consultation. They’ll tell you what the rules are in your state, and what you should be keeping track of. Then, get some sort of routine down. I deal with my stuff about four or five times a year. I get some sort of whiskey drink happening—last time I dealt with all this, in July, it was —and get a-Quickening. Then taxes isn’t such a frightening chore. It’s just mint julep time.